Young people are staggeringly ignorant about the Holocaust. It’s dangerous. 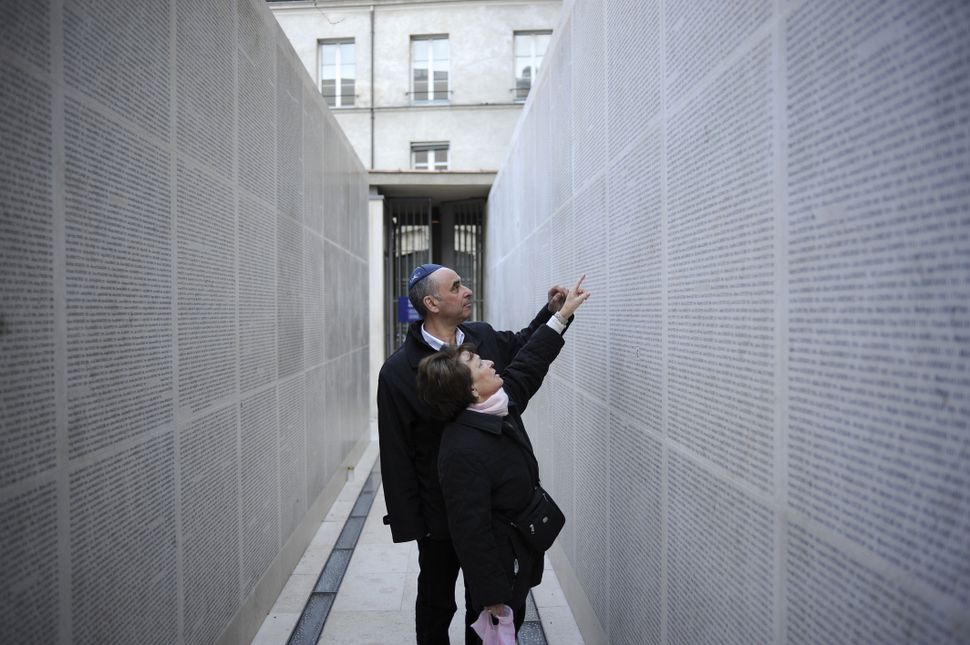 ce during World War II are written as they visit the Shoah memorial, on April 11, 2010 in Paris. In celebration of Yom HaShoah, a day held in memory by the State of Israel for Holocaust victims and the heroes in the Jewish Resistance during World War II, the Jewish Liberal Movement of France (MJLF) and the Shoah Memorial are organizing, for the fifth consecutive year, in partnership with The Association of the Sons and Daughters of Deported Jews in France, a reading of the names of deported Jews from France that will be held in front of the Wall of Names. During this uninterrupted reading for 24 hours throughout the day and night, the names will be read aloud, one by one, for every man, woman, and child who was deported. AFP PHOTO FRED DUFOUR (Photo credit should read FRED DUFOUR/AFP via Getty Images) Image by Getty Images

On Wednesday, the Conference on Jewish Material Claims Against Germany released the fourth in a series of studies on Holocaust Knowledge and Awareness — and the results are distressing. As Chair of the special task force for these country-by-country surveys, the latest one, conducted about Holocaust knowledge in France, provides a troubling glimpse into the next generation’s ability to convey an accurate account of the Holocaust into the future.

Moreover, while it’s heartening to learn that respondents believe greater Holocaust education is essential — in fact, the overwhelming majority think such education should be compulsory in schools — we need a substantive, authoritative and enduring commitment from government leaders to make this happen. While a substantial number of commemorative events will take place on and around International Holocaust Remembrance Day, on Monday, January 27, meaningful remembrance will not and cannot be a reality unless we are committed to better and broader Holocaust-related education.

This deserves more than a moment of sober reflection: Nearly half of all Millennial and Gen Z respondents believe that two million or fewer Jews were killed.

These results are clearly dismaying in and of themselves and even more so in light of the recent tragic assaults against Jews in France and elsewhere, as well as the frightening rise in anti-Semitism in general.

As alarming as that apparent trend is, we are also becoming increasingly aware of what amounts to ignorance, distortion or outright denial of the Holocaust. None can be tolerated.

We must insist upon greater education in schools. In countries where the Holocaust took place, students must visit the historical sites of the atrocities, places like Drancy, an internment camp in a suburb of Paris, or the Mémorial de la Shoah, the museum about the Holocaust in Paris.

In July 1942, French police, collaborating with the Nazis, rounded up approximately 13,000 Jewish men, women and children in Paris, sending approximately 6,000 to Drancy — the transit camp from which Jews were eventually deported, mostly to Auschwitz. The other 7,000 — including almost 4,000 children — were crowded into an indoor sports arena called the Vélodrome d’Hiver under deplorable conditions in an event that came to be known as the Vél d’Hiv Roundup. No arrangements had been made for food, water or sanitary facilities, and the ventilation was sealed to prevent escape. After days of incarceration, those held in the Vél d’Hiv were sent to transit or internment camps guarded by the French police, before being deported.

Overall 75,000 French Jews were deported to concentration camps, of whom just 2,500 survived.

It defies understanding that a country would tolerate raising a generation with such a dearth of fundamental knowledge of the complicity of its citizens in these atrocities.

On a hopeful note, the recurrent bright spot that emerges in each of our four studies is the desire for Holocaust education. In this recent study, most surveyed (79%) say that all students should learn about the Holocaust in school, and three-quarters believe Holocaust education should be compulsory at school. Additionally, almost all French respondents (82%) say that it is important to continue to teach about the Holocaust, in part so it doesn’t happen again.

So, what are the next steps? How do we best address the devastating findings that younger generations in particular do not know elementary facts about, nor fully understand the impact of, the Holocaust?

Country by country we must work together to insist that Holocaust education is substantially improved, thorough, accurate and compelling. Most of our partners on the task force, such as Yad Vashem, the United States Holocaust Memorial Museum and the Fondation pour la Mémoire de la Shoah (Foundation for the Memory of the Shoah, based in Paris) develop Holocaust education programs that are used worldwide.

The Claims Conference sponsors teacher trainings, providing instructors with tools and resources to make these lessons resonate with students. But we must do more and do it now, while we still have survivors with us to tell their stories; without knowledge of the past, we increase the possibility of unchecked hatred permeating the future.

If the authentic narrative continues to wane and we allow the truth to be turned into myth and denial to pervade and prevail, we will not only have shirked our moral responsibility; we will not be able to ensure that history will not repeat itself.

Young people are staggeringly ignorant about the Holocaust. It’s dangerous.