Let’s call Trump’s plan what it is: Oslo C 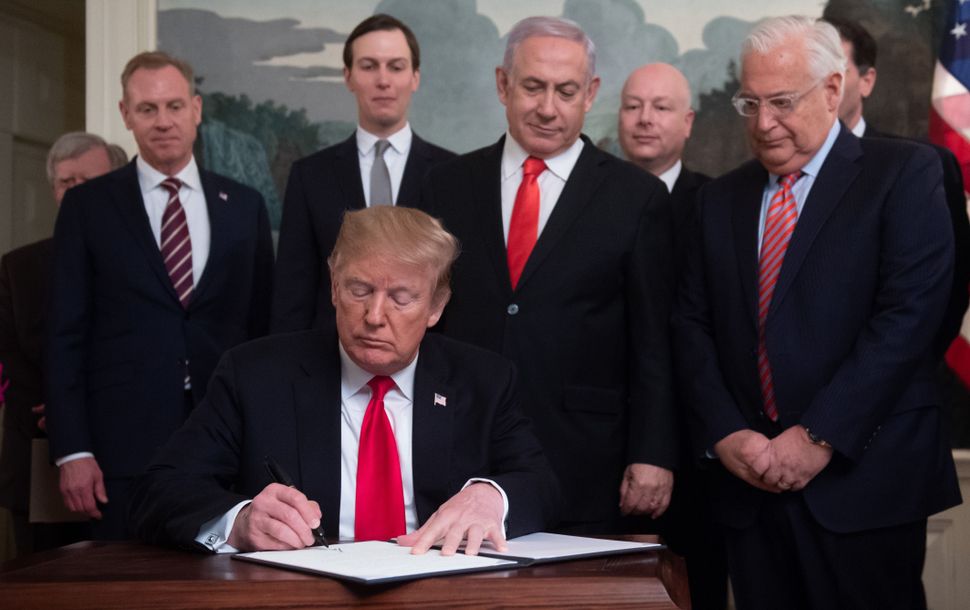 US President Donald Trump signs a Proclamation on the Golan Heights alongside Israeli Prime Minister Benjamin Netanyahu in the Diplomatic Reception Room at the White House in Washington, DC, March 25, 2019. – US President Donald Trump on Monday signed a proclamation recognizing Israeli sovereignty over the disputed Golan Heights, a border area seized from Syria in 1967. “This was a long time in the making,” Trump said alongside Israeli Prime Minister Benjamin Netanyahu in the White House. US recognition for Israeli control over the territory breaks with decades of international consensus. (Photo by SAUL LOEB / AFP) (Photo credit should read SAUL LOEB/AFP via Getty Images) Image by Getty Images

President Donald Trump went to great lengths on Tuesday to present his Israeli-Palestinian peace plan — his “deal of the century” — as novel and even groundbreaking. But if you take a closer look, you’ll notice that we’ve seen much of it before.

It has considerable overlap with plans laid out by three previous U.S. presidents: Jimmy Carter, Bill Clinton and George W. Bush. In fact, Trump’s plan has so much in common with Clinton’s agreements in the 1990s — known as “Oslo A” in 1993 and “Oslo B” in 1995 — that honestly, it should probably be captioned “Oslo C.” Because, ultimately, there is almost nothing new in this peace plan.

That’s not to say Trump hasn’t had an impact at all, nor is it to say that Trump’s “Oslo C” is useless. For one thing, he has drastically changed the internal balance established by each of the previous US-sponsored accords, and officially placed the American position in favor of Israel at the expense of Palestinians. Moreover, he has legitimized Israel’s abolishing of international law in the Palestinian territories.

What we should do with Trump’s plan is use it as an anchor for future negotiations. And Palestinians should use the plan as a reminder that time is not in their favor.

As in the past, Israel swiftly accepted the plan, while the Palestinians rejected it even before its release. What’s different this time is that Palestinians might not receive the same Arab solidarity as they have in the past. The Middle East has shifted significantly, demonstrated by Saudi-Arabia and Qatar’s support of Trump’s plan.

The future of the Palestinian territories, and in turn the borders of Israel, is one of the most important issues faced by the state of Israel. A comprehensive and democratic decision regarding the territories’ future should be made by all Israeli citizens in a national referendum to ensure the future borders encompass the Zionist vision of a democratic and secure nation-state of the Jewish people within secure boundaries in Eretz Israel.

Annexation is too important to be decided by a second transitional government led by — with all due respect — a prime minister who is currently under indictment for corruption.

The set of pre-requisites the U.S. laid out in the plan are not new either: disarmament of Palestinians, cessation of terrorism and incitement, demilitarization, “One rule, one gun” for the West Bank and Gaza, a physically unimpeded land connection between Gaza and the West Bank, and the halt of settlement construction.

The choice Israel has to make is between separating itself from the Palestinians in a two-states-for-two-people fashion or trying to maintain the status quo and promote an annexation that will end the Zionist enterprise. This is what the extremists on both sides have been driving Israel to act upon.

Trump is now officially in favor of the two-state solution, following the policy of his predecessors in the White House, which were all based on UN resolutions in the 1960s and 70s.

However, Trump’s “Oslo C” differs from previous American administrations’ plans in a few small ways. First, it intentionally lacks a distinction between the large settlement blocks adjacent to the June 4, 1967 lines, as well as those surrounding Jerusalem, and the remote, isolated settlements located deep within the Palestinian territory.

Trump’s plan also ignores a 2016 UN resolution and determines that no settlement will be evacuated. This the first American recognition of Israeli sovereignty over the settlements and the Jordan Valley.

And President Trump’s plan allocates four years for the Palestinians to initiate direct negotiations based on his plan. That is a much more reasonable and realistic time frame than the one-year or nine-month frames laid out by previous administrations.

The annexation, ostensibly, will be immediate, while the rest of the plan will be completed in the future. Consequently, the territory eventually governed by the Palestinian state will comprise about 70% of the West Bank.

According to the map, this is not a viable state, as the enclaves are detached from each other. A new component introduced in Trump’s plan is the exchange of populated territories and the transfer, under negotiated consent, of large Israeli-Arab residential areas to the Palestinians as part of the land swaps.

The enthusiasm for annexation of the settlements in Judea and Samaria implies a deviation from the core vision of Israel as a Jewish, democratic and secure state, with internationally recognized borders. Annexation would damage peaceful relations with Jordan and Egypt, fuel violence, encourage international denouncing and delegitimization, and with all likelihood, terminate the security coordination with the Palestinian Authority and precipitate the PA collapse.

Regarding the most problematic of all core contentious issues, Jerusalem would host the capital of both states: one, Yerushalaim, including the Old City, and the other, Al Quds, based in Abu Dis or in another Palestinian neighborhood, with Palestinian access to the holy sites.

The issue of Jerusalem will likely remain as volatile as ever. Perhaps that will accelerate the efforts of an intra-Palestinian reconciliation between Hamas and Fatah.

A safe, Jewish and democratic Israel could only ever exist under a two-state resolution. An absolute majority of senior officials regularly repeat this message.

The truth is that the settlements are not beneficial for Israel’s security if they contribute to the radicalization of terrorist organizations. In Judea and Samaria, IDF armed forces are disproportionately invested in protecting settlements and traffic routes, in contrast to Gaza and the Northern front.

Counterterrorism does not rely on settlements but rather on intelligence, field control, and operational freedom. Our demand in earlier negotiation rounds on a Permanent Status Agreement for a secure border in the Jordan Valley does not require the application of Israeli sovereignty there.

Securing the Zionist enterprise requires courage, leadership, and national responsibility. Without it, Israel will suffer delegitimization, demonization, international isolation and the erosion of its own core values, and be beholden to imposed solutions — albeit by friendly administrations.

Therefore, the two viable states for two peoples reality is indispensable. It is in the benefit of a Jewish, democratic Israel, and consistent with the Zionist vision while recognizing the Palestinians right to self-determination.

It is attainable through a series of transitional phases, interim agreements and constructive independent steps — all compliant with a continuous regional and bilateral negotiation process.

An internal Israeli dialogue and a participatory process are also essential, to amend schisms within the society.

Both Israel and the Palestinians will need the international community, the U.S. and President Trump’ hands-on, continuous, long-term assistance after the plan much more than they needed it before the plan was laid out.

Gilead Sher, a former Israeli senior peace negotiator who was Chief of Staff to Prime Minister Ehud Barak, heads the Center for Applied Negotiations at the Institute for National Security Studies INSS in Tel Aviv. Attorney Sher served recently as a visiting professor at Georgetown University and is Rice University’s Baker Institute Fellow in Middle East Peace and Security in Honor of Yitzhak Rabin.

Let’s call Trump’s plan what it is: Oslo C