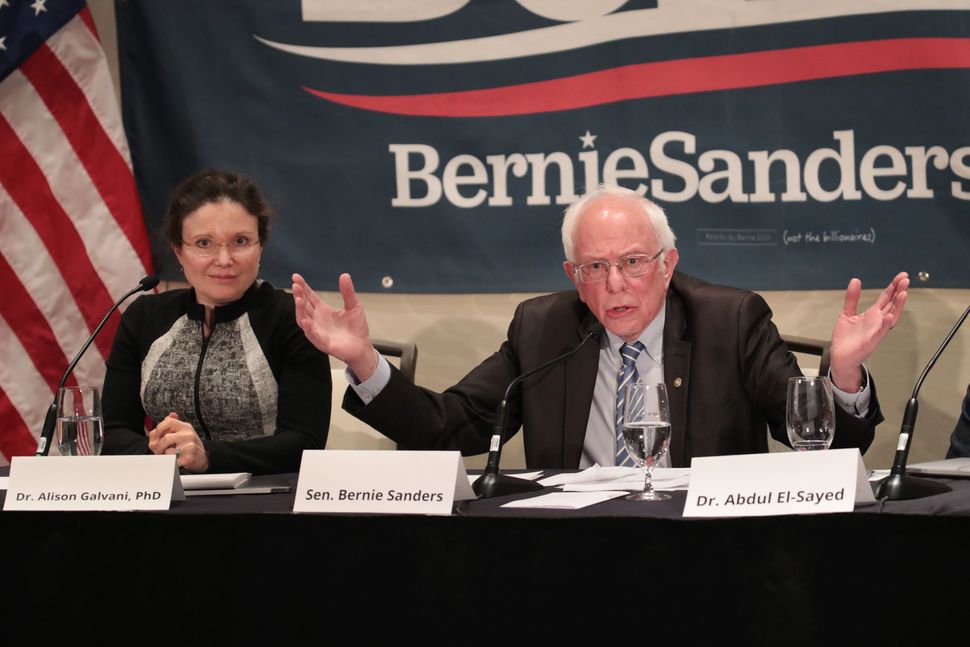 Former Vice President Joe Biden may be the frontrunner in the Democratic presidential primaries, but the race has already largely been shaped by another candidate: Vermont Senator Bernie Sanders, whose domestic policies represent the most progressive economic platform in generations.

Like Hillary Clinton in 2016, the former vice president has a clear advantage over Sanders on foreign policy and national security — issues that will receive increasing scrutiny as the general election approaches.

But Sanders has something Biden doesn’t: He is as bold on foreign policy as he is on economics, pledging to prioritize human rights and diplomacy as Commander in Chief. From the War on Terror to US support for Saudi Arabia, he has for decades challenged the Washington consensus. A Sanders presidency would have a profound impact on an array of American foreign policy issues.

This is no less the case in respect to US leadership on Israel-Palestine. In this arena, the diplomatic efforts of the last two administrations have been defined by animosity. President Obama’s relationship with Israeli Prime Minister Benjamin Netanyahu was strained, and Trump’s one-sided pro-Israel agenda has made it a point to antagonize Palestinians, moving the embassy to Jerusalem, withdrawing aid to the Palestinians, recognizing other disputed territories as part of Israel and proposing a peace plan without Palestinian input.

This contrasts with the achievements of Jimmy Carter, and later Bill Clinton, who brought Israel and its adversaries together for peace talks. Clinton’s Camp David summit ended without a deal but made huge strides toward one.

And Sanders’ neutral approach is reminiscent of Clinton’s, calling for Israeli and Palestinian leaderships to once again sit down for negotiations.

The United States can bring unequaled leadership to resolving the Israeli-Palestinian conflict, but we must use that leadership to promote a just and durable agreement. Any acceptable peace deal must be consistent with international law and multiple UN resolutions.

While Sanders lacks Biden’s White House experience, he does have a personal perspective unlike any presidential contender. Having grown up in an immigrant family affected by the Holocaust, and having lived on an Israeli kibbutz as a young man, Sanders’ view of the conflict is distinctly influenced by his Jewish identity and recognition of anti-Semitism. His viewpoint is in line with the labor and liberal Zionist traditions, which believe in a secure Palestinian state as much they do in a democratic, multicultural Jewish homeland.

Dropping a Nazi flag in front of a Jewish candidate isn’t rude or mean. And it’s not just a message for Bernie Sanders.

It’s a signal of intent. pic.twitter.com/46nVJrB4SG

Though he would be the first Jewish president, Sanders would undoubtedly receive a frosty reception from Benjamin Netanyahu, whose policies he has condemned as racist and reactionary. Nor has he endeared himself to the Israeli right by boycotting AIPAC conferences, or by condemning humanitarian suffering in Gaza and West Bank annexation plans, and suggesting that US military aid could be used as leverage for Israel to change course and enter peace talks.

But Sanders has no less harshly deplored terror attacks in Israel by the likes of Hamas, and as sympathetic as he is to the Palestinian cause, he also unequivocally defends Israel’s right to exist — rejecting a more radical one-state solution on this basis. His commitment to restore US aid to the Palestinian Authority is tempered by a critique of its corruption and links to extremism, which suggests he might use aid to also leverage the Palestinian leadership, too.

Over his 30 years in the US Congress, Sanders has built a reputation for being a pragmatic and effective negotiator who, despite his bad-tempered public image, is able to compromise and work across party lines. As much as Sanders is an idealist, he is also a realist in his pursuit of overarching goals.

Sanders is well-prepared to be the next Bill Clinton. His strategic abilities are accompanied by an even-handed, and compassionate, view of both sides and their national histories.

Of course, he might have more success if a leader like Benny Gantz — who has shown openness to fresh peace talks with the PA — were to replace Netanyahu. But there is nothing in Sanders’s record to suggest he would back down from tougher discussions.

The task at hand cannot be underestimated, but Sanders has proven himself to be an ideal candidate for the role of peacemaker.