There’s no consensus on what constitutes antisemitism. So we at the ADL created one. 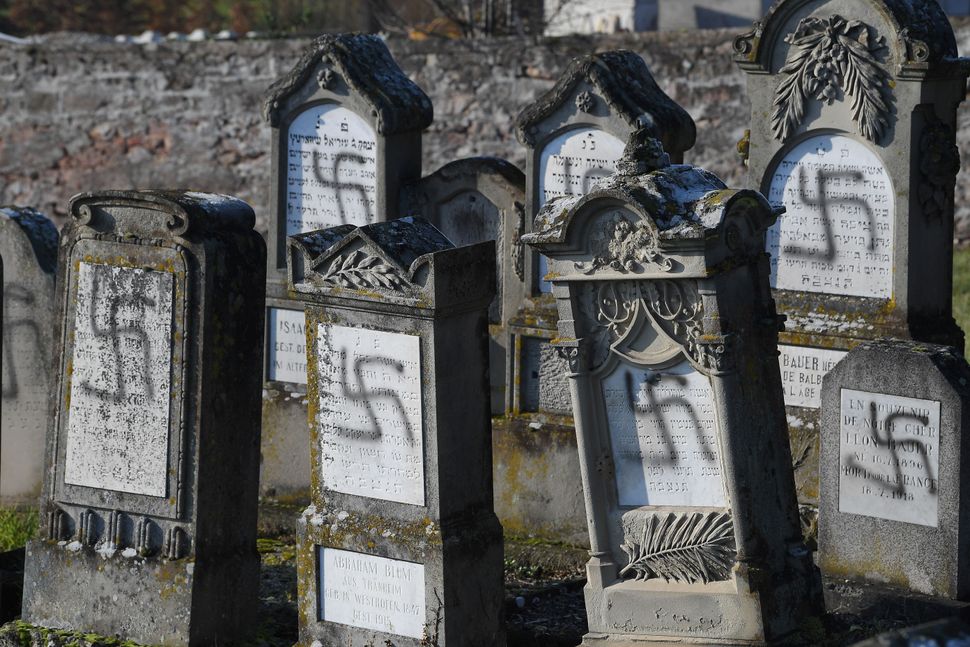 This picture taken on December 4, 2019, shows the jewish Westhoffen cemetery near Strasbourg, eastern France, where 107 graves were found vandalised with swastikas and antisemitic inscriptions. (Photo by Patrick HERTZOG / AFP) (Photo by PATRICK HERTZOG/AFP via Getty Images) Image by Getty Images

It’s undeniable: Antisemitism is on the rise. We know the numbers; we have the data. It’s been weaponized for partisan gain, it’s been normalized in politics, and it has gone viral.

Talk of conspiracy theories, foreign intervention, dual loyalty, and delegitimization of Israel continue to gain ground in the public conversation, moving from alt right discussion groups and backroom political meetings into the mainstream.

When a city councilman claims that the Jews are controlling the weather; when a member of Congress suggests that other Jewish members have dual loyalties; when students are ostracized on college campuses for supporting the Jewish state, we see the re-emergence of tropes that have historically been used to isolate, intimidate and scapegoat Jews across the expanse of history.

For more than 100 years, the Anti-Defamation League has been at the forefront of calling out these stereotypes whenever they appear, regardless of their source. But it has become increasingly clear that the lack of shared definitions and standards around the world’s oldest hatred has sowed confusion.

In today’s “always-on” media environment, everyone with a smartphone and a Twitter account instantly can be exposed to antisemitism. And yet there’s no clear consensus on what constitutes antisemitism, or clear understanding of why certain tropes are so offensive.

That is why we have created a new resource, “Antisemitism Uncovered: A Guide to Old Myths in a New Era,” that we are launching today and sharing with every member of Congress and national political candidate in the run-up to the 2020 elections.

Sadly, the past few years have been the most challenging in recent memory. Harassment is on the rise, vandalism continues to spread and from Pittsburgh to Poway to Jersey City to Monsey, to Halle, and violent antisemitic incidents have become all-too common.

One way to mitigate this hate is to effectively identify it for what it is. “Antisemitism Uncovered” was designed to do just that. It takes on seven of the most prominent antisemitic tropes that plague our society: power, dual loyalty, greed, deicide, the blood libel, Holocaust denialism, and anti-Zionism or delegitimization of Israel.

The guide provides numerous current and historical examples of how each one of these myths has been weaponized to demonize the Jewish people. It is the product of years of experience of our internal ADL experts. It has been peer-reviewed by some of the leading experts in the field of historical and contemporary antisemitism to ensure that its definitions are clear, concise and accurate.

From the insidious notion that Jews collectively murdered Jesus some 2,000 years ago, to the idea that billionaire businessman and philanthropist Mike Bloomberg is a “puppet master” for Democratic presidential candidate Joe Biden, to the comparison made by a television pundit that supporters of Sen. Bernie Sanders’ presidential campaign are akin to “brownshirts” from Hitler’s Nazi party, antisemitism abides by no logical parameters, defies neat political lines and stubbornly persists from ancient times to the present day.

Disturbing that @RaymondArroyo on “The Ingraham Angle” called @MikeBloomberg a “Biden Puppet Master.” This antisemitic trope on Jewish power/money, echoing rhetoric from white supremacists & other antisemites, should never get airtime. I wrote to @FoxNews: https://t.co/Har4Uc9BQo

The results can be deadly. We saw the hateful myth of Jewish “power” radicalize Pittsburgh synagogue shooter Robert Bowers, who believed it was the Jews that were behind the influx of migrants along our southern border in an attempt to “replace” white Americans.

And just in the past few weeks, our team has documented an increase in chatter among some extremists on the far-fringes of the internet that Jews somehow are responsible for creating and spreading the novel coronavirus. It is a baseless accusation but one with historical resonance: it echoes the medieval trope that Jews “poisoned the well” during the 14th century Bubonic Plague in Europe.

It’s all-important that we debunk these myths and educate people from all walks of life about what is and what is not antisemitism. By doing so, we hope to stem the greater normalization of antisemitism and prevent extremists and those with violence in their hearts from seeing a green light to act on such hatred.

We will circulate “Antisemitism Uncovered” broadly but specifically will engage the people who disproportionately shape public opinion, especially in this heated political season.

This might include the legislative staff of a member of Congress, the editorial board of a broadcast network, the standards team at a social media company, or the speechwriting staff of a presidential candidate. It also might include members of a local city council or the administrative staff at a major university where such tropes have been circulated.

It is our hope that “Antisemitism Uncovered” will help Americans and political leaders of all stripes to better understand what constitutes anti-Jewish hate. By calling it out but illustrating its historical precedents, I believe we can reduce the likelihood of antisemitism appearing in the first place.

In the end, this is ADL’s mission. In order to stop the defamation of the Jewish people and secure justice and fair treatment to all, we need all available tools at our disposal. “Antisemitism Uncovered” is an important new component of our broad, overarching strategy to combat the world’s oldest hatred.

It begins with education but it will not end until we have defeated this scourge once and for all.

Jonathan A. Greenblatt is CEO of the Anti-Defamation League.

There’s no consensus on what constitutes antisemitism. So we at the ADL created one.