Arab-Israelis are saving Israel’s democracy, one election at a time 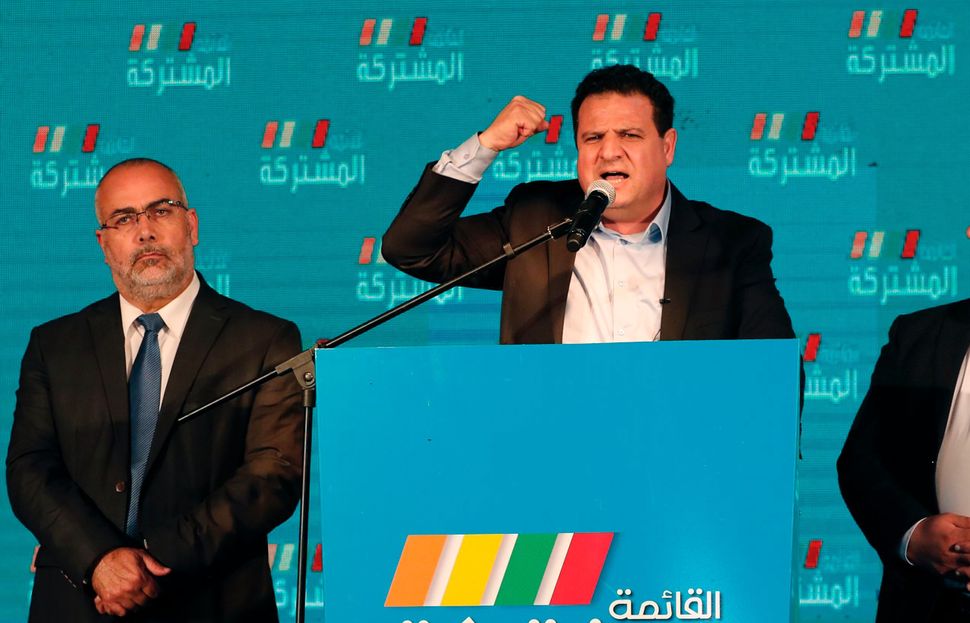 Ayman Odeh (C), leader of the Hadash party that is part of the Joint List alliance, gives an address with other alliance leaders at their electoral headquarters in Israel’s northern city of Shefa-Amr on March 2, 2020, after polls officially closed. - Israeli Prime Minister Benjamin Netanyahu appeared to lead his main challenger following elections with multiple exit polls putting his right-wing Likud several seats ahead of the centrist Blue and White party. Exit polls by three Israeli television networks, released after polls closed, gave Likud between 36 and 37 seats in Israel’s 120-member parliament against Blue and White’s estimated 32 or 33. (Photo by Ahmad GHARABLI / AFP) (Photo by AHMAD GHARABLI/AFP via Getty Images) Image by Getty Images

This Sunday, for only the second time in Israel’s history, Arab-Israeli parliamentarians played a decisive role in providing a majority for the designated candidate for prime minister, which for now is former IDF Chief of Staff Benny Gantz.

The gambit was historic for the very same reason its success appears so unlikely: A broad coalition of Israelis, who in normal times can’t stand the mere sight of each other, have united to resist Prime Minister Benjamin Netanyahu’s quest to hold onto power at all costs. Regardless of the outcome, the old game of Israeli politics, in which Arab-Israelis were treated as a fifth column when it came to deciding the country’s leadership, is forever changed.

The remarkable rise of the Arab vote was the common thread connecting the two repeat elections Israel held in September 2019 and March 2020, after the country failed to form a government following the original April 2019. Prior to the April vote, the Joint List collapsed, and two blocs of parties geared toward the Arab public, Hadash-Ta’al and Ra’am-Balad, won a combined 10 seats on miserable turnout in the sector.

In response to the April result, significant pressure was put on Arab political leaders to set trivial differences aside and once again unite into a Joint List, which they did, and in the September repeat election they won 13 seats with Arab turnout surging by 20%.

This not only increased Arab representation in the Knesset; it opened a path for real influence in government. In March’s election, the Joint List won 15 seats on another boost in Arab turnout as well as increased support from Jewish voters. And in September, for the first time since Yitzhak Rabin was given a mandate to form a governing coalition in 1992, parties representing the Arab public strutted into the residence of Israel’s president and recommended that Gantz, and not Netanyahu, lead the government.

While historic, this move was ultimately insufficient: Three MKs from the Joint List representing the Palestinian nationalist Balad party refused to support Gantz, who led the Israeli military during Operation Protective Edge in the summer of 2014. The result was that despite what was widely seen as a disappointing defeat, Netanyahu was given the mandate first.

But that dynamic changed yesterday, when Balad’s leader, Mtanes Shehadeh, joined the other faction heads of the Joint List in giving Gantz their support.

Analysts chalked this up to Balad’s newfound willingness to accede to the majority decision of the Joint List after its other constituent parties defended a controversial Balad candidate whom mainstream Zionist parties, including Gantz’s Blue and White, tried to disqualify. But the Joint List was not the only party that made a historic move yesterday. Yisrael Beteinu, the ultra-nationalist party led by former defense minister Avigdor Liberman, supported the very same candidate backed by the Joint List, whose members of parliament Liberman has referred to as terrorists and worse.

Evidently, Liberman is both determined to avoid a fourth election and committed to doing what he can to prevent another government led by Netanyahu, whom he no longer regards as even a potential political ally.

Few predicted this outcome after the exit polls from the election were released two weeks ago. Even after official results depicted a much less rosy reality for Netanyahu and his Likud Party, the possibility of the entire “Anyone But Bibi” bloc coming together for even a single occasion seemed remote. Netanyahu had improved on his September performance and the outbreak of coronavirus made it risky for the opposition to launch a political maneuver.

Yet the previously unthinkable has indeed come to pass. Yesterday, a majority of the Knesset defied the “majority of the majority,” in effect the Jewish majority, in selecting a candidate for prime minister. A “Jewish majority” was the standard to which Netanyahu appealed in the days after the election. It has now been rejected by a diverse coalition of political parties, in a time of crisis no less.

No outcome is preordained and it is unlikely that the taboo of Arab-Israeli parties actually sitting in government will be broken anytime soon. Netanyahu may still come out on top, and President Reuven Rivlin is encouraging the formation of an “emergency unity government” to deal with the coronavirus.

Nevertheless, the improbable combination of courage and pragmatism have upended conventional wisdom. In the clash between a Jewish majority and a democratic majority that includes all sectors in society, it is the latter, against all odds, that is on the ascendant. As Ayman Odeh, chairman of the Joint List, wrote last year following his initial decision to support Gantz’s candidacy, “Arab Palestinian citizens cannot change the course of Israel alone, but change is impossible without us.” Indeed.

Arab-Israelis are saving Israel’s democracy, one election at a time