Israel must act now to prevent a coronavirus disaster in Gaza 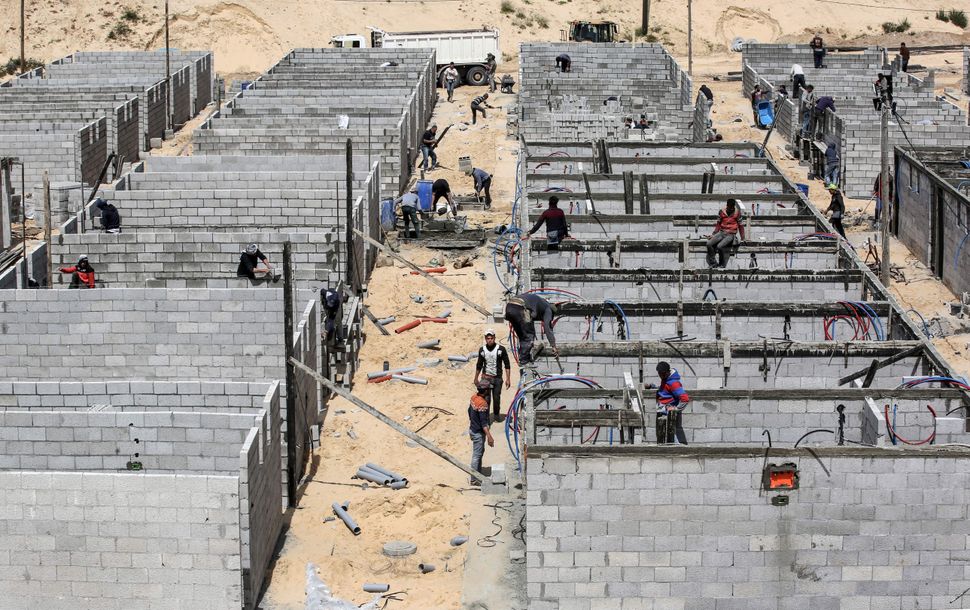 A picture shows the construction site of a field hospital to house coronavirus patients in Rafah in the southern Gaza Strip on March 23, 2020. – Authorities in Gaza confirmed the first two cases of novel coronavirus, identifying the individuals as Palestinians who had travelled to Pakistan and were held in quarantine on their return. The United Nations has warned that a COVID-19 outbreak in Gaza could be disastrous, given the high poverty rates and weak health system in the coastal strip under Israeli blockade since 2007. Authorities in Gaza have said that more than 2,700 Palestinians are in home-isolation, mostly people who had returned from Egypt. (Photo by SAID KHATIB / AFP) (Photo by SAID KHATIB/AFP via Getty Images) Image by Getty Images

Gazans used to joke that Israel’s blockade, which keeps out the world, will keep out the coronavirus — wishful thinking, it turned out; the coronavirus has finally come to Gaza. The results may be catastrophic, and Israel has a unique role in assisting current and future patients in Gaza.

After 13 years of blockade imposed by Israel, Gaza’s healthcare system is in a permanent state of crisis. The ongoing separation between East Jerusalem, the West Bank and Gaza by the Israeli authorities prevents healthcare workers, medical goods and patients from freely moving from one area to another. And many essential kinds of medical equipment and drugs are simply unavailable. Certain types of radioiodine treatment are not available in Gaza, nor can cancer patients always leave. These freedom of movement restrictions together with other barriers to health, including lack of drinking water and infrequent supplies of electricity, significantly impact hospitals’ abilities to operate.

The needs of Gaza’s healthcare system are so great that the last time Physicians for Human Rights — the NGO where both of us authors volunteer — went to Gaza, it brought the most basic disposable medical equipment, such as endoscopic stents, coronary stents and orthopedic prosthetics, so that we could help the local teams carry out regular surgical operations.

The World Health Organization is now rapidly trying to gather funding for the most basic materials needed to deal with a potential outbreak of the epidemic — from antiseptics to IV fluids. Healthcare workers, meanwhile, have raised the alarm about missing masks and protective suits.

At this time, it is unclear how many testing kits for the virus are available, a crucial part of the strategy in identifying those who are infected. This means that the virus may already have widely spread in the population undetected. There are only around 70 intensive care unit beds, which will become the ground zero of the corona outbreak, as compared to Israel’s roughly 300. A field hospital has been built with on-site labs and intensive care units, but only around 40 beds have been added, which will only be able to assist roughly 100 patients.

Coronavirus is coming. There are already two patients in Gaza. In addition, there are over 2,700 Gazans in home isolation and more than 1,270 quarantined in 20 specially-prepared isolation units, which were converted from local schools and hotels. Those returning to Gaza through Erez and Rafah are checked by medical staff and then sent to these units for a 14-day period, while those who arrived in Gaza before the 15th of March are in home isolation.

But Gaza’s high population density, with nearly two million people in 360 square meters, combined with the fact that nearly 40% of the population lives in poverty, means that it is unclear how strictly people will be able to abide by isolation regulations. A vendor on a subsistence salary is now put in an impossible situation and must choose between potentially infecting tens of people or ensuring that his family has enough to eat for the next few days.

And then there are Gaza’s patients, those who do not have COVID-19, but have cancer, or cardiac problems or are orthopedic patients. These patients can find no treatment in the Strip under normal conditions and must leave to get medical care. In 2018, according to the WHO, 9,644 requested to leave the Strip via Israel to hospitals in East Jerusalem, Israel and elsewhere. Only 61% received a medical exit permit from the Israeli authorities.

Those who did not receive a medical exit permit were left to either reapply with the hope that the authorities’ decisions would be reversed, or accept their fate in Gaza. COVID-19 has tightened these restrictions, with both the Israeli authorities, the PA and Hamas preferring that patients do not leave, except for in urgent cases — a feeling held by the patients as well.

The Israeli authorities, who are largely responsible for the current medical crisis in Gaza, should, together with Hamas and the Palestinian Authority, come up with alternative solutions for Gazan patients at such a time. It seems that all three parties are currently in dialogue about the threat of coronavirus, but it is unclear what will actually happen once there is an outbreak in the Strip.

To ensure that Gaza’s so called “regular” patients, including cancer and cardiac patients, are able to receive any treatment at all, Israel must immediately reverse its current position and allow in the medical materials, equipment and medication it has until now prevented from entering the Strip. Israel must also step up and provide assistance for Gaza’s health needs, just as it has, until now, presided over the deterioration of the healthcare system. Indeed, the Geneva Convention clearly states that an occupier — which Israel effectively is — must take “prophylactic and preventive measures necessary to combat the spread of contagious diseases and epidemics.”

Meanwhile, the Israeli medical community, people like us, must be loud and clear about the value of Palestinian lives and the need for all of us to pitch in. Just as coronavirus works independent of one’s ideology and political grounds, so should we.

Dr. Mohammad Awawde is a Palestinian-Israeli and the head of the nephrology department at the Holy Family Hospital of Nazareth. He has been to Gaza several times on medical delegations to train local doctors.

Professor Zvi Bentwich is an Israeli Jew who heads Ben-Gurion University of the Negev’s Center for Emerging Diseases, Tropical Diseases and AIDS.

Israel must act now to prevent a coronavirus disaster in Gaza