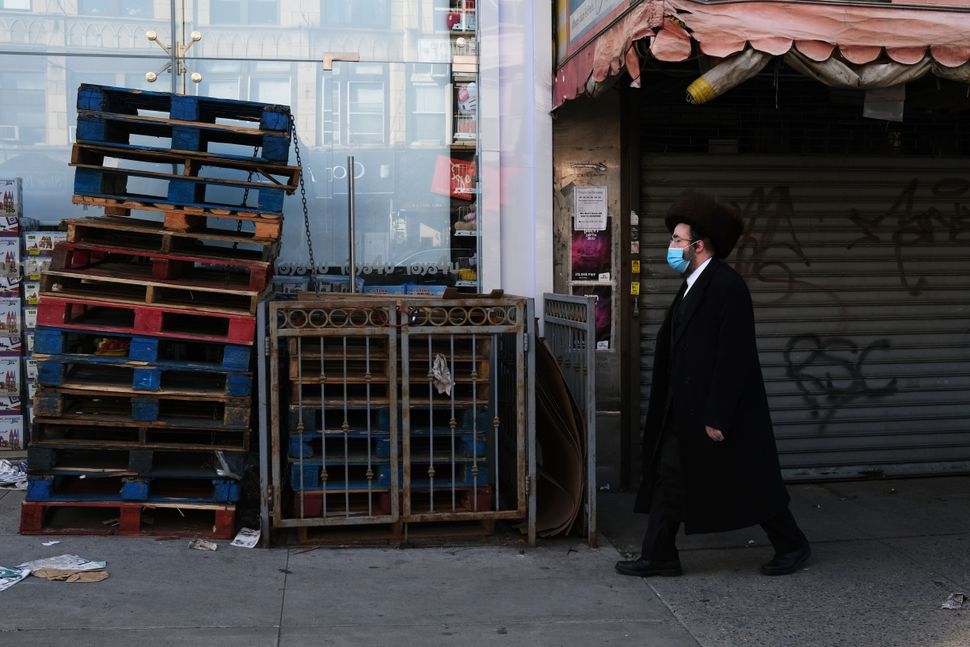 An Orthodox jewish man walks through the Borough Park neighborhood on the eve of the Passover holiday on April 08, 2020 in New York City. Borough Park, a historically Hasidic neighborhood, has been hit particularly hard by the coronavirus. Many of the traditional Passover traditions and events have been canceled or scaled back so as to spreed the virus. (Photo by Spencer Platt/Getty Images) Image by Getty Images

Orthodox Jews don’t use technology on the Sabbath or holidays. When two-day holidays fall on Thursday and Friday, as Passover did last week, it means three days off the grid. But when the peaceful three-day holidays drew to a close on Saturday night, I was filled with a sense of dread. I knew my inbox would be full of people alerting me to unfair media coverage about the haredi Jewish community.

I was not wrong. In a piece titled “Fear and Frustration Rise as Virus Spikes in Jewish Enclaves,” The New York Times went all in on its ignorance about our community and its contempt for our way of life. The article began by noting that Rockland County has the highest per capita rate of infection in New York State, and that “local authorities have been waging a losing battle to curb the coronavirus outbreak.” “The source of the problem lies in small pockets of the county that are home to a large number of Orthodox Jewish residents, some of whom, according to authorities, have refused to adhere to social distancing requirements,” the article goes on.

The piece was fraught with the kind of anti-haredi content we’ve sadly grown used to. Based on little but hearsay, The New York Times concluded that because there are a lot of cases, this must mean that haredi Jews are flouting the rules en masse, when the truth is that in a community like ours, just a few rule breakers can have an outsized impact.

Orthodox Jews live in more densely populated areas, and therefore have higher infection rates — like other more densely populated neighborhoods. But you wouldn’t know this from the coverage, which prefers to blame the fact that we are Orthodox Jews, rather than the factors that have resulted in high infection rates across New York. It’s something The New York Times has figured out when covering people who aren’t Orthodox, like in another piece about the outbreak in Queens. But somehow, factors like overcrowding and low incomes don’t make it into pieces about the Orthodox.

Instead, we’re told that this is like the measles outbreak, which The Times tells us “was partially ascribed to low rates of vaccination in some Jewish enclaves.” More hearsay, it turns out: While certainly some resist vaccination, overall vaccination rates for Orthodox Jews are in line with the general population.

And of course, you never hear about the family sizes in our community, which contribute to the higher infection rate. The average American family is 3.14 people per household, while the average Orthodox household has more than six people. The likelihood of getting and spreading infections increases substantially with larger families — not that the media will mention this in their reports.

Neither will they ever discuss the heroic Hatzalah members — emergency response medic volunteers who put themselves in harm’s way every day during this crisis, many of whom have been infected and even succumbed to the virus. Nor has there been any mention of the various organizations that provide material support to families affected by this pandemic.

Over and over again, the media’s bias against haredi Jews has been coming through in its coverage of the coronavirus spread, erasing factors like density and a language barrier in favor of just blaming our Orthodoxy.

Take the coverage of Bnei Brak, a majority ultra-Orthodox Israeli city adjacent to Tel Aviv. The Israeli government locked down the city due to the high rate of infections. But you would have to find out on your own that Bnei Brak is Israel’s most densely populated city. Instead, the New York Post tells readers of Bnei Brak’s haredi Jews, “Some have heeded rabbis who, out of distrust for the state, spurned anti-virus measures.” This despite the fact that Rav Chaim Kanievsky, universally regarded as the senior rabbinic sage in all of Judaism, issued a strongly worded edict prohibiting all public prayers, and urging people to comply with the health ministry’s guidelines — several days before The Post ran their story.

These are only the most recent examples of this type of coverage. Whenever a negative news story about an Orthodox Jew breaks, the whole community is painted with the same brush. When Jews are covered in such a distorted way, is it any wonder that many locals foster hate against them? If Orthodox Jews keep being portrayed as not complying with CDC guidelines over and over, people will start acting out against them.

In fact, it’s started: A part-time police officer joked about bombing Kiryas Joel, a small Hasidic town in upstate New York. And haredi Jews have already been refused service by some businesses.

Here’s a visibly Jewish man trying to get his car serviced at @Toyota World in Goshen NY, which was open for business.

The employee tells him they won’t serve him because “you’re spreading the virus.” pic.twitter.com/flgjxoO9Vn

The media needs to start reconsidering the way they cover us. By continuing to cover Orthodox Jews with reporters whose entire knowledge of our community consists of what they can gather from google, they are not only misinforming the public, but actively aiding in the rise of hate crimes against Jews.