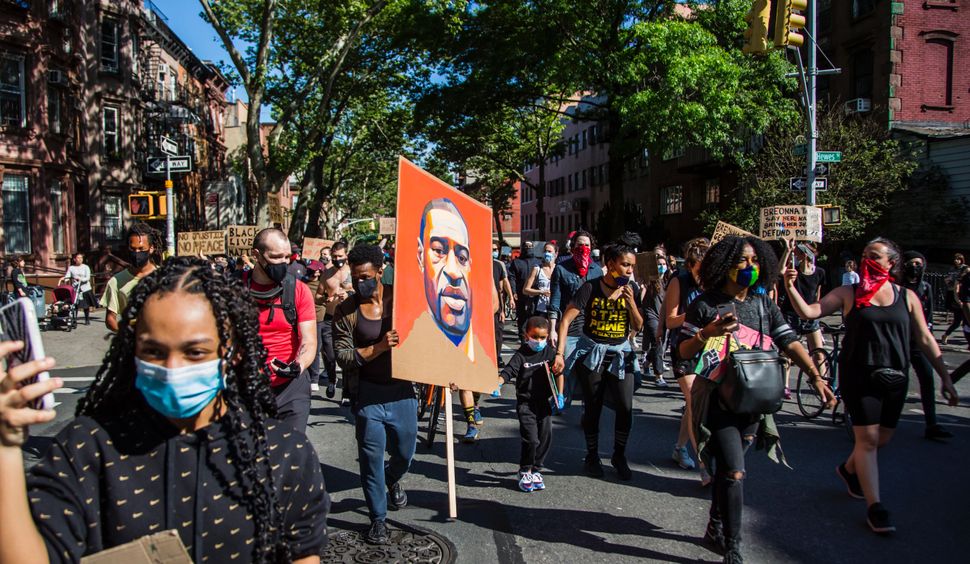 NEW YORK, NEW YORK – JUNE 03: People take part during a protest against the death of George Floyd on June 3, 2020 in Brooklyn, New York. The white police officer, Derek Chauvin, has been charged with second-degree murder and further charges are pending for the three other officers who participated in the arrest. Floyd’s death, the most recent in a series of deaths of black Americans at the hands of the police, has set off days and nights of protests across the country. (Photo by Pablo Monsalve / VIEWpress via Getty Images) Image by Getty Images

All of last week and into this one, Americans grieved and demonstrated and were beaten in the streets by police as we protested George Floyd’s murder. It is an emotional time, with the wins of the Black Lives Matter movement making change seem, finally, possible. Yet existing communal tensions remained.

All week, I’ve been asked the same question: Can I financially support the fight for racial justice while refusing to compromise on my stance on Israel?

The answer is an unequivocal yes.

First, some context: In August of 2016, the Movement for Black Lives put out its policy platform. Among a list of social justice initiatives, it included an inflammatory, deeply anti-Zionist policy brief which put forth an ahistorical and lopsided version of the Israeli-Palestinian conflict. The platform was immediately met with widespread condemnation from the Jewish community. Even those who are deeply critical of the Israeli government felt the platform had gone far too far, and that when they spoke up about it, the movement’s leaders completely dismissed their concerns in a way that left lasting pain and anger.

Ever since, the conversation on the relationship between supporting racial justice, Black Lives Matter, and support for Israel has remained explosive. I have heard from countless people this week that they feel they are in an impossible moral quandary, forced to choose between their love of Israel and the fight for justice for black Americans — including their neighbors, friends, and family. Others expressed rage at the idea that any Jew or any person for that matter could have any doubts at this moment that they must open their wallets, put on their sneakers, and fight for justice. And many felt caught between these positions, torn in two.

I am here to tell you that you can absolutely support racial justice while supporting Israel.

For starters, Black Lives Matter has no campaign goals around Israel in 2020. Israel policy does not appear on its website.

Certainly, there are people in the racial-justice movement who hold views that are anti-Zionist and inflammatory on Israel. Black Lives Matter is a diffuse and decentralized movement. There are debates and disagreements. There are substantive tensions and disagreements within Black Lives Matter about whether the movement should be pushing policy at all, and what exactly the movement is.

The guiding principle behind the movement is the fight for a world free of anti-blackness, an umbrella which includes many. There are anti-Zionists and proponents of Boycott, Divest, Sanctions who are part of this movement. There are also champions of Israel, like civil rights hero Representative John Lewis and Mayor Muriel Bowser, who lead a trip with JCRC from D.C. to Israel promoting trade and partnership just last year.

This bottom-up, raucous, debate-infused structure may be confusing to many in the organized Jewish community, as most of our influential communal organizations are well-known for being hierarchical and centralized, especially on an issue as flammable as Israel. But those organizations that declare Black Lives Matter often include diverse views and many viewpoints on achieving black liberation and don’t always agree even within themselves, whether the issue is Israel, defunding the police, or what police reform and criminal-justice reform will lead to real change.

And it’s worth noting that Back Lives Matter doesn’t lobby, and therefore has never lobbied on Israel. If you donate to Black Lives Matter, you are donating to a protest movement that is not pushing anti-Israel policy on the Hill or in any of its 2020 campaigns (you can read about their 2020 plans here).

Crucially, choosing to take yourself out of the racial justice movement, Black Lives Matter or otherwise, because you are pro-Israel actually hurts Israel. It’s often said in politics that if you aren’t at the table, you’re on the menu. If people who love Israel decide they are going to stay home, close their wallets and take off their shoes, refusing to participate in the entire racial justice movement because some people within it support BDS or are anti-Zionists then the only people fighting for the lives of black Americans will be those who support BDS and those who are anti-Zionists._ This will make the pro-Israel movement less powerful, to say nothing of what it will do to our own Jewish communities to abandon a struggle so important to us. It would mean turning our backs on the black Jews among us, and abandoning our own values for equality.

The truth is, we should stand for racial justice because of our morals, because we believe everyone was created Btzelem Elohim, because no one’s child deserves to be choked for eight minutes and 46 seconds by a police officer in the street until they die while other officers watch.

This moment simply isn’t about Israel. People are still grieving George Floyd, Breonna Taylor, and Ahmaud Arbery. That’s what this moment is about. Their lives. They deserved to live. They were innately worthy of life and it was taken from them.

Lastly, I recognize that many American Jews still feel deeply uncomfortable donating to the Black Lives Matter movement. Many people I deeply respect want to give their money to organizations that are pro-Israel or fully neutral on Israel. The good news is, most racial justice organizations fit those criteria, including the two oldest and largest civil rights organizations in America, the NAACP and the National Urban League. You can also choose to support the Innocence Project, Leadership Conference on Civil and Human Rights, the National Black Justice Coalition, the Jews of Color Field Building Initiative, Campaign Zero, or the Bailout Project.

It is a fallacy that you must choose between standing up for racial justice and supporting Israel. Don’t fall for it.