Editorial | After months of silence, a scream 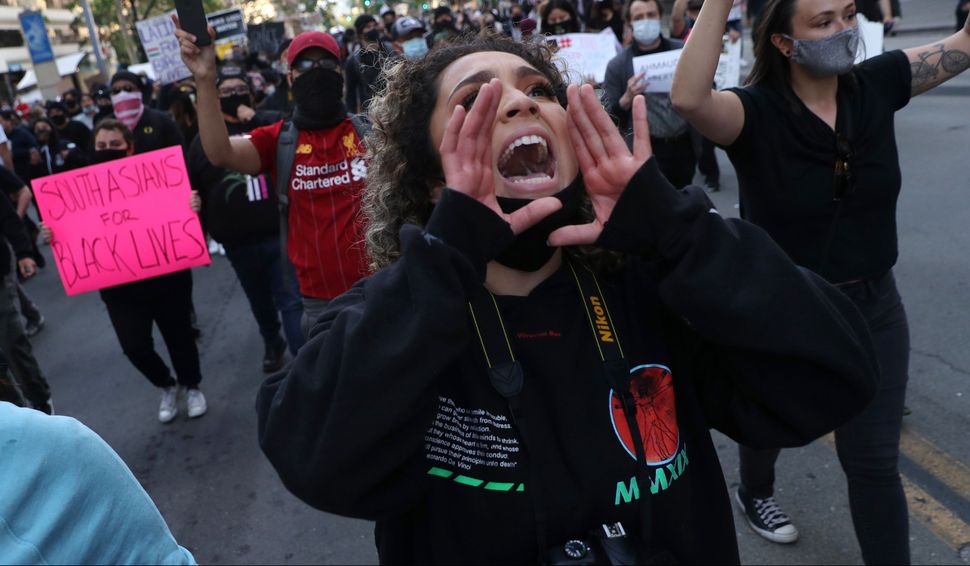 Last April my daughter joined a “Day of Silence” to protest the discrimination LGBTQ students face in schools. It’s a national thing, organized at her middle school by the Gender-Sexuality Alliance whose meetings she goes to most Fridays. The kids wore special black T-shirts and tried not to talk all day. Then — and this is the really powerful part — they all came together in a concrete courtyard of sorts and screamed.

One loud, long, collective scream. In that scream was all the middle-school pain, all the pent-up peer pressure, all the agony of LGBTQ silencing, invisibility and not fitting in — and all the power of people coming together for a cause.

She reminded me of this scream as we were talking about the protests now entering their 11th day. She is politically engaged and astute for 12, and found herself thinking both that posting black squares on Instagram pages was too passive, and that masses of people in the streets during a pandemic, problematic. She is an artist, and said this moment calls for “a creative kind of protest.”

What if, my daughter said, we all went on our porches or balconies, onto the sidewalks and streets, at the same time, and screamed. Just as we went out to clap for health-care workers, just as people in Italy sang opera from their verandas, and Israeli Jews recited the Four Questions alone together from their mirpesets, now everyone in the country who wants to could come together in one loud, long, collective scream.

I am only watching from a distance, but to some extent, that’s actually what this movement feels like. A giant scream from a country convulsed in anger and grief and fear — over George Floyd’s senseless death at the hands of the police, yes; and deep-seated systemic racism and inequality, definitely; and political polarization and powerlessness, too.

A scream that comes, also, from months of being cooped up in our corners, of feeling vulnerable and impotent to a deadly virus also unfairly seeming to target black people, of truly not knowing what comes next. A scream heard — and echoed — around the deeply divided and scary world. A scream with no end in sight.

You can see it in the photographs of the day’s demonstrations. Over and over again, there is a protester, an open mouth only scant distance from the plastic face shield of a police officer holding a line, rage and agony pouring out.

Thinking about this primal scream reminded me, also, of something my nephew introduced at our Passover Seder several years ago. He had learned it from an Israeli shaliach who stayed with his family for a few months. When you get to the part of the Haggadah that says, “VaNitzak” — “and we cried out to God” — everyone lets out the longest, loudest scream they can muster.

Amid the turmoil of this terrible week, I went to a baby naming on Thursday morning. It was the perfect antidote to the horrible headlines: a tiny newborn, free of racism, innocent of violence, open to all possibilities, celebrated by a community of 100-plus little Zoom boxes of love.

My rabbi and his wife called their new daughter Amalia — Hebrew for “God’s labor,” a nod to the Talmudic notion that there are three partners to creation: mom, dad and Hashem. “God’s labor,” of course, is also our labor — the work we all have to do, to repair our broken world. Little Amalia did not scream, not even once.

A few hours later, at a memorial service in Minneapolis, the Rev. Al Sharpton spoke of George Floyd’s death as a metaphor for the black experience in America — “ever since 401 years ago, the reason we could never be who we wanted and dreamed of being is you kept your knee on our neck.”

To close the service, there was a “moment of silence” — for the interminable eight minutes and 46 seconds that Officer Derek Chauvin held his knee on George Floyd’s neck. It felt impossibly long; many mourners wept behind their masks.

The silence. And the scream.

Jodi Rudoren is the editori-in-chief of the Forward.

Editorial | After months of silence, a scream