What does Jewish tradition say about ‘Defund the Police’? It’s complicated. 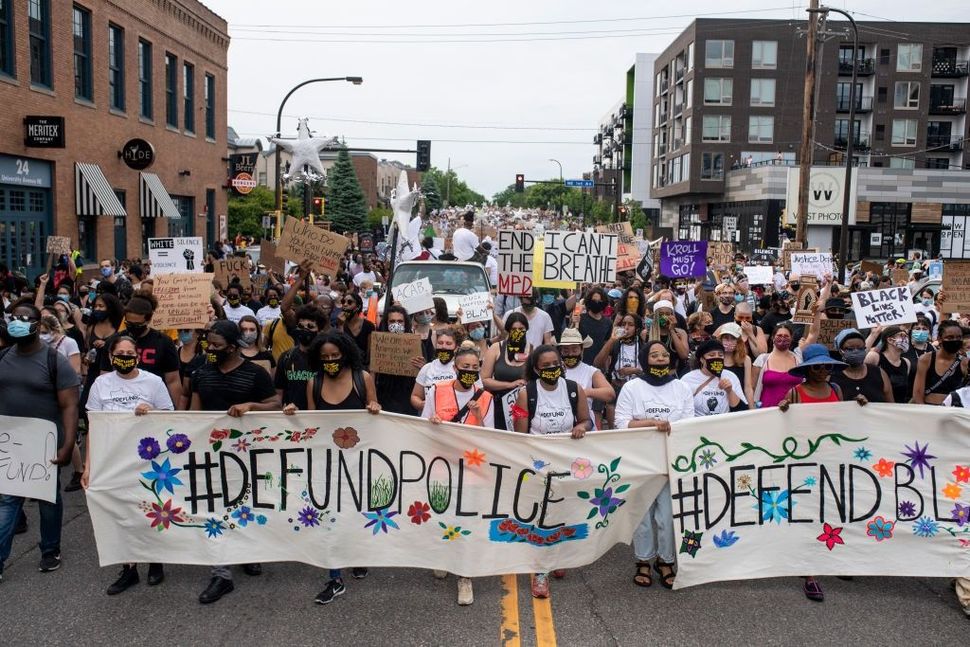 In the wake of George Floyd’s death at the hands of police officer Derick Chauvin, a new cry has emerged from amidst the protests against racism and police brutality shaking the nation: Defund the Police. The cry means different things to different people, but in addition to addressing the fraught tensions between black communities and the police, the idea of defunding the police or minimizing their presence in American cities suggests a future in which people police themselves more than they do now.

So the call to defund the police resurrects an ancient question: Are people essentially good and in minimal need of law enforcement, or is the idea of our “better angels” a fantasy? It’s a question that was of great interest to our Jewish Sages.

The Talmud (Avodah Zarah 4a) cites a verse in Habakuk (1.14) that compares people to fish. “Just as among the fishes of the sea, the larger fish [naturally] swallows the smaller one, so, among people, were it not for the fear of the kingdom [i.e. governmental authority, utilizing police] the stronger would [naturally] swallow the weaker.”

Along similar lines, the Mishnaic sage Rabbi Chanina S’gan haKohanim counseled that Jews should pray for the welfare of the government and offered the maxim (Avot 3:2) that, “Without the fear of the kingdom a man would swallow his neighbor alive.”

An aquarist like me can well relate to the metaphor; mixing large fish and those small enough to fit in their mouths together in the same tank is a recipe for disaster, at least for the smaller ones. And, of course, countless corpses around the world once held the souls of people who simply hadn’t the strength to resist others’ hatreds and violence.

So it’s reasonable to assume that Jewish tradition would counsel as strong a government, and law enforcement authority, as possible. But Jewish tradition actually counsels a more subtle eventuality. It was not lost on our sages that there have been times when governments have been evil, and when officers of the law have acted immorally. It’s something we have repeatedly seen, most recently in Minneapolis.

The current pandemic of political polarization leads many people to assume that one is either for police or against them; for defunding departments or strengthening them. That is, though, a false dichotomy. What most proponents of “defunding” police forces mean to suggest is that we shift some of the money currently spent on overtime or unnecessary, expensive equipment for police to better police training, and to more accessible mental health, housing and education programs for citizens in depressed neighborhoods.

Those latter efforts aren’t intended to supplant policing, but to make shows of force less necessary, and the possibility of police misconduct less likely.

Carried by the current anti-authoritarian winds, the conviction that authority isn’t necessary for society to function is dangerous; it could well yield a breakdown of the essential law enforcement curb that prevents people from “swallowing each other alive.”

But at the same time, while there will always be a need for laws and their enforcers, there are ways, other than aggressive policing, that can help prevent us humans from descending to our default of beastliness in the first place. Providing services and opportunities to urban communities and their residents are likely more effective deterrents to crime than providing military weaponry to police departments.

The Midrash (Sifra, parshat Behar) offers a parable: If a donkey is carrying a heavy burden, even a single person can easily keep it from falling off. But if it has already fallen to the ground, even five men will be unable to lift it up and put it back on the animal.

Human nature, which, as per Rabbi Chanina, can be dark, is a burden. If it fully expresses itself, then, like the physical burden fallen from the donkey’s back, dealing with it will take inordinate effort.

But if the burden can be prevented from falling in the first place, if the worst potentials of human nature can be undermined with carefully considered interventions and opportunities, there will be less for the heavy lifters, the necessary agents of law enforcement, to lift.

What does Jewish tradition say about ‘Defund the Police’? It’s complicated.