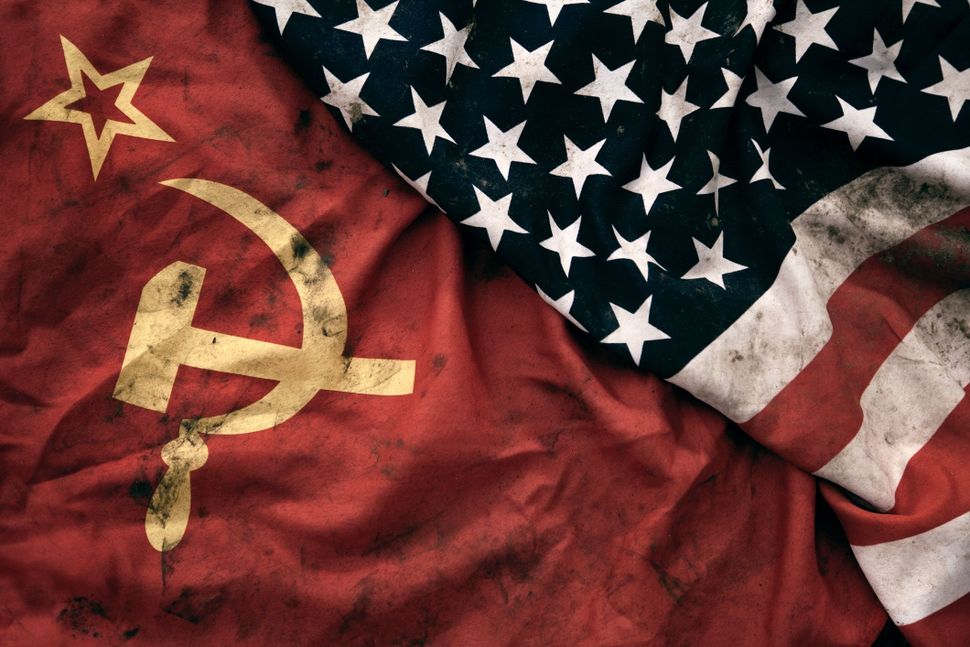 Forty years ago next month, I came to the United States from what was then the Soviet Union. Less than four years ago, I wrote about my worry that certain elements of both the old USSR and Vladimir Putin’s new authoritarian Russia were on the rise in the country I now call home: on the right, Putin-style aggrieved populism and love for strongman rule; on the left, Soviet-style ideological zealotry and thought policing.

In 2020, these trends seem to have become America’s new normal.

Some of the police actions we have witnessed during the protests in response to the killing of George Floyd have been disturbingly reminiscent of the treatment of protesters in Putin’s Russia: peaceful demonstrators clubbed, pepper-sprayed, roughed up, and arrested for dubious reasons. The degree to which the authoritarian mindset has taken hold in Donald Trump’s Republican Party was evident in the infamous New York Times OpEd by Sen. Tom Cotton urging a show of military force to stop unrest in American cities, even without request for help from city or state governments.

But at least so far, this Putinesque/Trumpian authoritarianism has been largely a bust. The protests only grew stronger, and arguably prevailed insofar as we’re seeing real progress on police reform. Military leaders including former Trump administration officials have pushed back strongly against the use of troops to disperse non-violent protesters.

Trumpism is dangerous. But at the moment, I’m more worried about Soviet-style zealotry and witch-hunting on the left.

Izabella Tabarovsky, a fellow ex-Soviet Jew, has published a trenchant piece in Tablet about the “Soviet mentality in America,” drawing parallels between Soviet collective “hounding” of heretics like Boris Pasternak after the publication of his novel “Doctor Zhivago” in the West in 1958, and modern Twitter mobs, such as the one that went after New York Times op-ed writer/editor Bari Weiss after the Times published Cotton’s column.

The Old Guard lives by a set of principles we can broadly call civil libertarianism. They assumed they shared that worldview with the young people they hired who called themselves liberals and progressives. But it was an incorrect assumption.

Today’s mobs, Tabarkovsky concedes, “do not follow orders from above” — but they still have power: “Those of us who came out of the collectivist Soviet culture understand these dynamics instinctively.”

Another Russian-born Jewish American journalist, Julia Ioffe, strongly disagreed. On Twitter, Ioffe called Tabarkovsky’s article “dumb,” pointing out that “criticism is not censorship” and “is not analogous to being arrested, shot or sent to the Gulag.”

As a fellow student of Soviet history, I say:
1. Criticism is not censorship
2. Criticism is not analogous to being arrested, shot or sent to the Gulag
3. Do you want free speech or not?
4. Bari Weiss still has her jobhttps://t.co/xde6YyJJog

Of course not. But there is a big difference between criticism and denunciation.

Ioffe noted that “Bari Weiss still has her job.” However, New York Times op-ed page editor James Bennett does not. Neither does former Philadelphia Inquirer editor Stan Wischnowski, forced out over a “Buildings Matter Too” headline on an article exploring the damage to the community from property destruction. (Not the smartest headline, but was it a firing offense?)

Neither does data scientist David Shor, sacked after accusations of “anti-blackness” for tweeting out a paper — by a biracial scholar, Omar Wasow — showing that violent protests tend to backfire against progressives. Neither does sports broadcaster Grant Napear, fired for tweeting “ALL LIVES MATTER… EVERY SINGLE ONE!” in response to a question about his view of the Black Lives Matter movement. (Napear says he didn’t realize the phrase was perceived as a disparagement of BLM.)

Hey!!!! How are you? Thought you forgot about me. Haven’t heard from you in years. ALL LIVES MATTER…EVERY SINGLE ONE!!! https://t.co/DfzKl3w0jm

Neither does Sue Schafer, an obscure government contractor fired after the pointless exposure of a two-year-old incident in which she wore blackface to a Halloween party to mock television host Megyn Kelly’s defense of blackface costumes.

University of California-Los Angeles accounting professor Gordon Klein still has his job despite being denounced for a caustic email refusing a request to alter final exams or give grading accommodations to black students because of current events, but he has been placed on leave because of the backlash. Lee Fang, a reporter for The Intercept assailed as racist for his interview with an African-American BLM supporter who felt that the movement should pay more attention to lives lost to violence within the black community, has likely kept his job only because he posted an apology for being insensitive and causing “harm” to his colleagues and others.

I wanted to share this statement. I owe it to those who follow my work and to my colleagues. There’s a lot to express that won’t fit in a tweet so please read this. https://t.co/7JdnA4NFm2

And often, the accusers are explicit about their intent to get their target fired: Shor’s main “critic,” Democratic activist Ari Trujillo Wesler, tagged his employer with the comment, “Come get your boy.”

It’s true that getting fired is not the same as getting shot or imprisoned. But that didn’t happen to Pasternak, either, who was never arrested or sent to the Gulag. He was “only” denounced in angry articles and pages of letters expressing righteous outrage at his supposed anti-Soviet “libel” and calling him a traitor, an enemy, and a “White Guard” counterrevolutionary. He was then expelled from the Soviet Writers’ Union and lost all his publishing contracts. As another Soviet Jewish poet, Alexander Galich, put it in his 1968 ballad in memory of Pasternak, in a blistering reference to writers who shrugged off his persecution as no big deal: “Well, it’s not prison or the camps, or execution.”

In fact, after the end of the Stalin era, relatively few dissenters in the Soviet Union went to prison, except for chronic troublemakers and those involved in organized activism. Mostly, the punishment for “thoughtcrime” was social ostracism and loss of access to respectable work or education — in other words, a pattern very similar to our current “cancel culture.” More common than being shipped off to a Gulag was the fate of a former journalist my parents knew in the late 1970s, who was hauling heavy loads for a living because he spoke against the 1968 Soviet invasion of Czechoslovakia at an office meeting. In the milder, post-Stalin phases of the Soviet regime, you had to be an actual dissenter to be punished by either prison or ostracism — in contrast to the Stalin era, when you could end up in the Gulag for unintentional missteps (like the father of one of my mother’s co-workers, arrested because he was overheard saying that Stalin sounded tired in a radio address).

It’s also true that Soviet “cancellations” were always instigated by the regime and backed by the threat of state-sponsored violence: You could get kicked out of college or lose your job today, go to prison tomorrow. And yes, that makes a huge difference. Yet the similarities in mindset remain, from the Soviet-style calls for shunning ideologically deviant family members to the abject apologies for wrongthink to the repercussions for insufficiently vocal or genuine support for the cause, for instance, when the leadership of the Poetry Foundation is forced to resign after their statement expressing “solidarity with the Black community” and condemning “injustice and systemic racism” is blasted as inadequate and met with threats of boycott; or when a widely circulated Google document slams theaters for not speaking out on racial injustice, and then for posting messages of solidarity that feel “slapped together and hollow.”

The current anti-racist moment demands that we politicize all personal life, and all art. The ubiquitous corporate messages of solidarity with Black Lives Matter — from Netflix to my bank’s website to Whole Foods — makes me think of the way slogans like “Forward to the victory of Communism!” and “The Party and the people are one” were woven into Soviet life at every step. It feels like a fake, forced demonstration of conformity — no matter how much I agree that we must do more to ensure that the inalienable rights to life and liberty are equally accessible to black Americans.

I know all too well that anti-racist rhetoric can be weaponized in the most cynical ways: I grew up under a regime that weaponized such rhetoric as a propaganda tool while condoning actual rampant bigotry (including toward African students at Soviet universities). My own repugnance for racism certainly didn’t come from this propaganda; it it came from my parents, from my awareness of anti-Semitism, and from reading American literature (“The Adventures of Huckleberry Finn” and “To Kill a Mockingbird” were among my favorites).

Many of today’s anti-racists are motivated by genuine and commendable concern about bigotry and inequity. But animating this anti-racist moment and the cadre of activists seeking to build a utopia of absolute equality, cleansed of all broadly defined oppression or “harm” to any member of a traditionally disadvantaged group, I see the same passion that drove communism, whose anthem, “The Internationale,” famously promised “A brand-new world we will create;/We who are nothing shall be all.” It has the same conviction that — to quote yet another Soviet slogan — “whoever is not with us is against us.” In today’s version, you are either actively anti-racist as defined by the activists, or racist, with nothing in between.

This story does not end well.