Woodrow Wilson was a hero to Jews. What should we do with his racism? 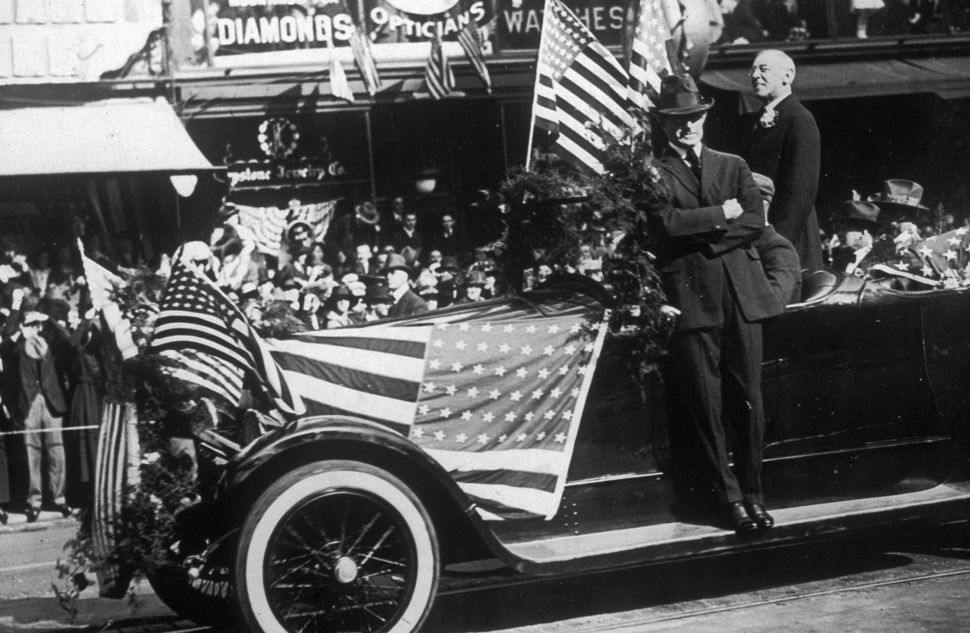 Princeton University’s decision to remove Woodrow Wilson’s name from its public policy school because of the former president’s “racist thinking and policies” points to the complexity of Black-Jewish relations in the United States, and to problems in our definition of greatness. The man whom African Americans revile as a villain turns out to have been a hero to the Jewish people.

Jews long admired Wilson for his intellect and political liberalism, as well as for the warm appreciation he displayed toward Jews at a time when so many other Americans were overtly anti-Semitic. When Wilson first ran for president, in 1912, a remarkable political ad in Boston’s Jewish Advocate urged readers to join with “practically all the great Jewish leaders throughout the country” in supporting him, citing his progressive views on immigration and his willingness to abrogate a trade treaty with Russia as punishment for its violations of Jews’ human rights. In large black letters, the ad listed famous Jews who supported Wilson, including financier Jacob H. Schiff, philanthropist Nathan Straus, and ambassador Henry Morgenthau. It urged all “thinking Jews” to join them.

As president, Wilson, frequently consulted with attorney Louis Brandeis, and in 1916, courageously nominated him as the first Jew ever to serve on the U.S. Supreme Court. He continued to back him in the face of widespread opposition from prominent businessmen and lawyers, and succeeded in pushing the nomination through the Senate. The appointment marked a turning point in American Jewish history.

When it came to his policies, Jews applauded when Wilson vetoed legislation that sought to reduce immigration by means of a literacy test. Wilson, along with pro-immigration activists and liberals of his day, argued that such a test would discriminate against those denied the opportunity to be educated in their countries of origin. He continued to oppose restrictionist legislation during his second term, sticking to his principles in the face of a rising anti-immigrant tide. Restrictions imposed in 1917 passed over his veto.

Wilson also pledged support for the aims of the Zionist movement. In 1917, he endorsed the Balfour Declaration that viewed with favor “the establishment in Palestine of a national home for the Jewish people.” As the son of a Presbyterian minister, he intimated, he considered it “a privilege to restore the Holy Land to its rightful owners.”

Wilson’s championing of both Louis Brandeis and Zionism elevated him to the status of a hero in Jewish history books. Alfred J. Kolatch and David G. Dalin, for example, conclude in their book, “The Presidents of the United States and the Jews,” published in 2000, that “perhaps more than any other president, Woodrow Wilson had the utmost respect and admiration for the Jewish people.” They recount that Jews of his day considered him “a hero and a savior, a man of principle and ethical uprightness.” The twenty-eighth president’s legacy, they predicted, “will loom large in the annals of Jewish history.”

Students of African American history, of course, learn a totally different narrative concerning Woodrow Wilson. He was a child of the Deep South, raised in Georgia and South Carolina, and he absorbed the prejudices of his surroundings. He staunchly defended segregation. He espoused racism, characterizing Blacks as “an ignorant and inferior race.” He sought to disenfranchise Black Americans, calling them “unfitted by education for the most usual and constant duties of citizenship.” As President, he dismissed as many Blacks as he could from government service.

Many find it discomforting to learn that Wilson was, at one and the same time, so bad for American Blacks and so good for American Jews. Social activists understandably prefer figures like Abraham Lincoln, Martin Luther King and Abraham Joshua Heschel whom Blacks and Jews can join together to celebrate. They seek “perfect” heroes and role models, not those sullied by great sin. They fear that complex figures like Woodrow Wilson, so easy to valorize and to demonize, promote discord and confusion.

Realistically, though, flawed heroes like Wilson, or for that matter Thomas Jefferson, have much more to teach us than impossibly perfect ones. The flawed heroes are human beings we can relate to: complex figures who combined good and bad elements. They are visionaries with blind spots. Many a flawed hero accomplished great deeds and changed the institutions and nations they led for the better, even as they also (like Wilson and Jefferson) sinned grievously against individuals and groups. They remind us that good people can do very bad things — and vice versa.

Jewish history and Black history are actually replete with flawed heroes, dating all the way back, in Jewish history, to the biblical patriarch Jacob, who deceived his father, stole his brother’s birthright, and played favorites among his children. In America, there have been Black leaders like W. E. B. Du Bois who reviled Jews, and Jewish leaders, like Mordecai Noah, who reviled Blacks. Perfect heroes, for obvious reasons, have been few and far between. Indeed, the more closely we probe, the more flaws even the greatest of our heroes inevitably display.

It is easy, as we have learned these past weeks, to kick flawed heroes off their pedestals and deface their images. But perhaps, keeping in mind the example of Woodrow Wilson, it would be better to learn from their disappointing shortcomings. Probing more deeply into their flaws may invite us to think harder about our own.

Woodrow Wilson was a hero to Jews. What should we do with his racism?