What the world can learn from the Orthodox response to COVID 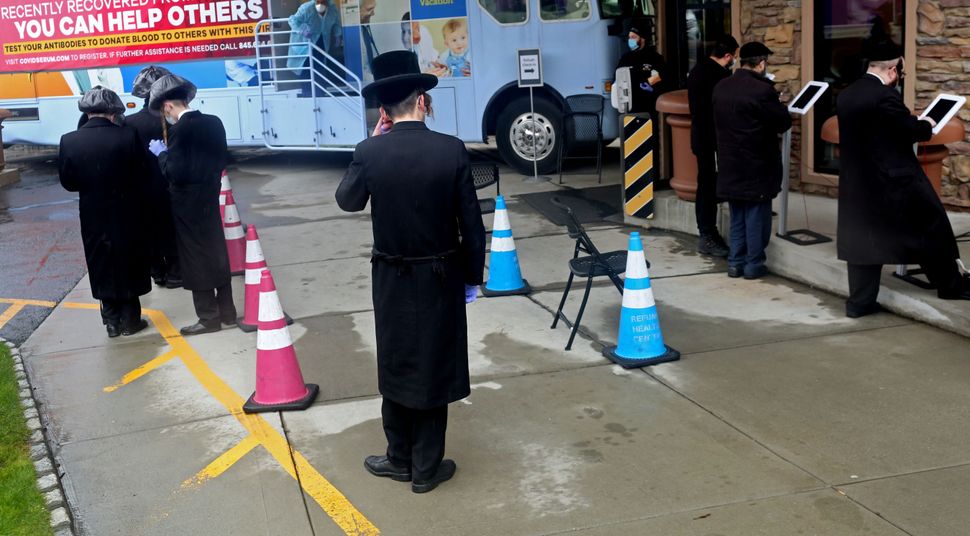 In what we now know as the “early days” of the COVID-19 pandemic, as the waves of the virus washed over New York and New Jersey, the Haredi communities in the area seemed to get hit disproportionately hard. While no hard data exists to either validate or disprove this perception, it continues to persist both within and without Haredi communities.

I came down with COVID-19 in the latter part of March and early April. Still, I count for none of the official tallies, since testing was so hard to come by at that point that I could not find anyone who would administer one for me. The only way I know for sure that I had the disease was because of an antibody test I took, which came back positive.

That test was one of over 1,000 vials drawn at a massive testing drive coordinated by Bikur Cholim of Lakewood, N.J., trying to harness what we all believed was an opportunity to fill the area blood banks with convalescent plasma. Rabbi Yehudah Kaszirer, who runs the organization, told NBC that they tested over 600 people at the drive who showed antibodies. At the time, Lakewood only had about 1,200 confirmed cases of COVID.

Coronavirus is still here despite a somewhat return to normalcy in New York. Just got an email urging to donate plasma to help prepare for a second wave. pic.twitter.com/2EybtPLO85

I can confirm that they’re lining up in Flatbush to donate/get tested to donate! (Sent from the line outside Chaim Berlin High School.) https://t.co/GUsp9A2X1S pic.twitter.com/nLZhx0cxeO

But plasma drives were only one way the Haredi communities responded to the COVID pandemic. What we did should serve as the basis for a national strategy for controlling the pandemic: identify, test, isolate, and trace.

In Lakewood, for example, CHEMED health center has added a supplementary layer to the County Health Department’s track and trace efforts. They built a common platform for all the community’s practitioners, including private practices and urgent care centers. There, doctors input every active COVID-19 result they get, allowing everyone to see the cases in real-time should an outbreak develop.

Dr. Jeffrey Kaminetzky, CHEMED’s Chief Medical Officer, tells me that they also assist the Health Department with contact tracing. Despite low response rates nationwide to contact tracers, in his experience, people in our community have been helpful, forthcoming, and responsible.

In one case, a couple developed symptoms and tested positive for COVID-19 soon after returning from Florida. “They did nothing wrong,” he says. “They came back before the mandatory quarantine was in place, and they tested as soon as they developed symptoms. When I called them, they provided a complete list of their contacts. I can tell you that they and all their other contacts cooperated with all quarantine requirements as recommended by CHEMED doctors and state law.”

For tracking cases across Lakewood, there are also have community-specific identifiers and potential spreading sites like neighborhood and house of worship/Shul. This allows for quick identification of potential hotspots and clusters should any begin to form.

So far, none have. And while Dr. Kaminetzky is still concerned about what the increasing rate of infection across the country might mean for people in Lakewood who are both high risk and without protective antibodies, he believes the community’s combination of testing, tracking, and tracing, is helping prevent community spread.

It isn’t just in Lakewood, either. “The first people who signed up for the contact tracing training in Rockland county were Frum Jews,” Rabbi Yisroel Kahan, executive director of the Oizrim Jewish Council in Rockland County, tells me.

Is it working? It seems so. As Rabbi Kahan says, the Haredi community has “only seen isolated cases or suspected cases with no hospital transports since late April.” Members of Brooklyn Hatzalah I spoke to told have had a similar experience. During the peak of the pandemic, “the radio literally didn’t stop.” But for over two months, it has been back to pre-COVID volume. Throughout the city — including in Williamsburg, the site of a rabbi’s funeral which Mayor DeBlasio and Commissioner Shea singled out as “dangerous” — it’s been months since they have had to transport a single patient to a hospital for Covid.

Crown Heights, according to a community COVID blog, has been exceptionally quiet as well. Yosef Hershkop of Kāmin Health Crown Heights Urgent Care, a Crown Heights urgent care center which serves both the Jewish and non-Jewish communities, says that despite doing well over 1,000 Covid tests over the last month or so, none of the positive results his center has gotten back were from members of the Jewish community.

The very same aspect which made Haredi Jews seemingly more susceptible to this infectious disease seems to position them perfectly to contain it: The sense of community and communal responsibility not only allow for this kind of community-wide tracking of the virus; it makes it both easier and more effective.

While some people have been chalking this low incidence of illness to “herd immunity” — an idea epidemiologists find highly unlikely — perhaps it tells us something much simpler than that. And while it is certainly difficult to replicate the sorts of things smaller populations with unique circumstances find success with, there is still something we can learn.

Haredi communities, by virtue of their large families, dense neighborhoods, and interconnected communities which bring together people of all ages, were considered especially at risk for the spread of the novel coronavirus and the death counts that come with it. If, despite that, they’ve figured out how to apply the basic principles of pandemic management in a way that works, we should think about applying those lessons elsewhere as well.

We don’t have to mandate complete lockdowns and spend energy wondering why everyone doesn’t always wear a mask. Maybe if we were to embrace the more minimally invasive aspects of social distancing in places where people live with a healthy dose of personal accountability and communal responsibility the way the Haredim do, we might extend these successes to more places around the country, and help everyone get back to life as close to normal as possible.

What the world can learn from the Orthodox response to COVID