Young Black Voters are alienated from the Democratic Party. Can Biden fix it in time? 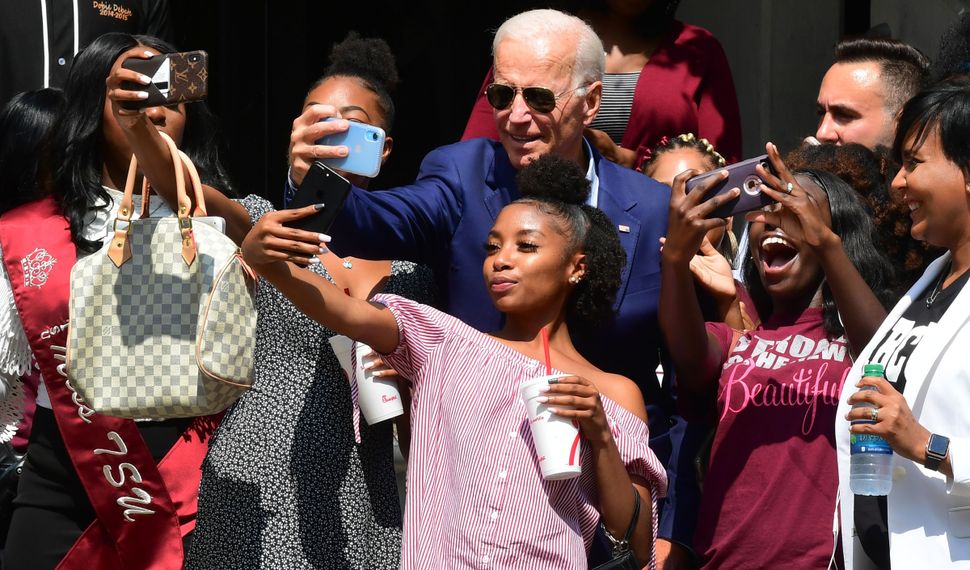 The Republican National Convention has in its first two days been a repudiation of the things Black voters care about: police reform, Black Lives Matter protests, and expanding housing access. Speakers touted keeping low income housing out of the suburbs, they defended the police, and they praised President Trump as the “bodyguard of western civilization.”

You would think given this messaging that Trump’s rival, Joe Biden, would have a lock on the Black vote. So you might be shocked to learn that a recent survey from earlier in the summer found that almost half of young Black voters have no intention of voting for Biden.

This summer, I had the opportunity to work on the American University Black Swing Voter Project alongside Professors David Barker, Leonard Steinhorn, and Center for Congressional and Presidential Studies fellow Sam Fulwood III. We conducted a survey of Black Americans’ political attitudes, with a particular focus on young Black voters under the age of 30.

We found that these young voters have less trust in the Democratic Party than their older counterparts, and were much more likely to feel as if their vote didn’t make a difference.

Only 47% of survey respondents aged 18-29 said they planned to vote for Biden, compared to 86% of respondents over the age 60 who said they would do so. (Support for Biden among those aged 18-29 increased to 73% if Biden was to pick a Black running mate, which he ultimately did, selecting Kamala Harris.)

What accounts for the difference between the attitudes of younger and older Black voters?

I believe it can be explained by proximity to the Civil Rights Act of 1964 and the Voting Rights Act of 1965. That kind of large, institutional change made Black voters into loyal Democrats for generations. Today’s younger Black people are temporally further away from those events, so they have less of an effect on how they view politics.

Which brings me to something Biden can do to reverse the alienation of young Black voters from politics: If Biden is elected President, the Democratic Party will have the opportunity to pass legislation that can directly impact the lives of young Black people and change how they feel about the party over the long term.

It’s one of a number of measures he should pursue to this end. Here are a few others.

Millions of Americans protested after the death of George Floyd at the hands of a Minnesota police officer. This moment has changed political attitudes across the spectrum and brought the Black Lives Matter movement into the mainstream. 80% of young Black voters fear the police will harm them or someone that they care about, which shows how deeply this demographic has been impacted by police violence.

Democrats could achieve this through a legislative package which dramatically increases federal oversight over local police departments and establishes a public national database for police shootings, killings, and other types of misconduct. The federal government could levy legal and financial penalties against police departments with excessive rates of misconduct. Biden already supports the decriminalization of marijuana, and has said he will push to expunge prior convictions.

If Democrats can use the power of the federal government to punish police misconduct, they can improve trust with young Black Americans during a critical time.

Biden has released a $2 trillion infrastructure plan, which the Democratic nominee has said would “create millions of union jobs.” The unprecedented economic havoc wreaked by the COVID-19 crisis means that such a plan is likely to generate much more public support than it would have otherwise. The plan would repair and rebuild roads, bridges, and other U.S. infrastructure, but it is important to recognize that the government likely wouldn’t be directly employing people here. Instead, the federal government is likely to contract these projects out to private corporations.

A Biden Administration could mandate that in order to be awarded a government infrastructure contract, companies must prioritize hiring people of color. This would help to ensure that Black people share in the economic recovery, especially when the finances of Black families have been hit hard by the crisis.

Monthly Stimulus Payments For Those In The Greatest Need

In May, Kamala Harris called for $2,000 a month payments to Americans making less than $120,000 for the duration of the COVID-19 crisis. This could be a bigger price tag than Congress is willing to pass. But a smaller, more targeted form of monthly stimulus payments may be politically feasible during the crisis.

Democrats could provide a monthly stimulus check of $1,200 to Americans making $40,000 or less. Politically, this could be sold as uplifting those most in need. It would also disproportionately help people of color, who are much more likely to have work in lower paying jobs.

This would probably be considered the most radical proposal, and would face stiff opposition from deficit hawks. The Administration can defend itself by saying that Trump set the precedent, and that the program would only last for the duration of the crisis. The Democratic Party would be able to contrast themselves with the Trump Administration (monthly checks for those in need vs. a single check) and highlight the differences between having a Democratic and a Republican President.

In the context of young Black voters and their relative lack of trust in the Democratic Party, D.C. statehood is actually more important than you might think. According to our survey, it’s clear that young Black people have higher levels of trust in Black politicians and value Black representation.

D.C. statehood would instantly create the Blackest state in the country. There is a good chance it would send two Black Senators to Congress, and they would probably be among the most liberal Democrats in the chamber. This would be a meaningful expansion of Black autonomy and representation.

This could be the most difficult thing on this list for Democrats to actually achieve, but giving D.C. statehood should be a real goal of Democrats going forward.

With the selection of Kamala Harris as his Vice Presidential nominee, it’s clear that Biden cares about responding to Black voters. Biden is also on record pledging to name a Black woman to the Supreme Court, another potential first which could give Black people greater representation at the highest levels of government for years to come. If the Democrats can prioritize issues like police reform and D.C. statehood, their party can go a long way to increasing trust with young Black voters and bringing them into the Democratic fold for the long term.

Some of these proposals may require eliminating the legislative filibuster. There are downside risks, but Democrats may have to seriously consider doing so under a Biden Administration. But just passing effective legislation isn’t enough. More young people than ever are getting their news from social media. After passing legislation, Democrats need to claim credit in the mediums where these voters frequent, and do it with politicians that they trust.

This is how Democrats can build a stronger relationship with young Black voters and turn this demographic into a reliable constituency going forward.

Young Black Voters are alienated from the Democratic Party. Can Biden fix it in time?