Is there room in Orthodoxy for satire? 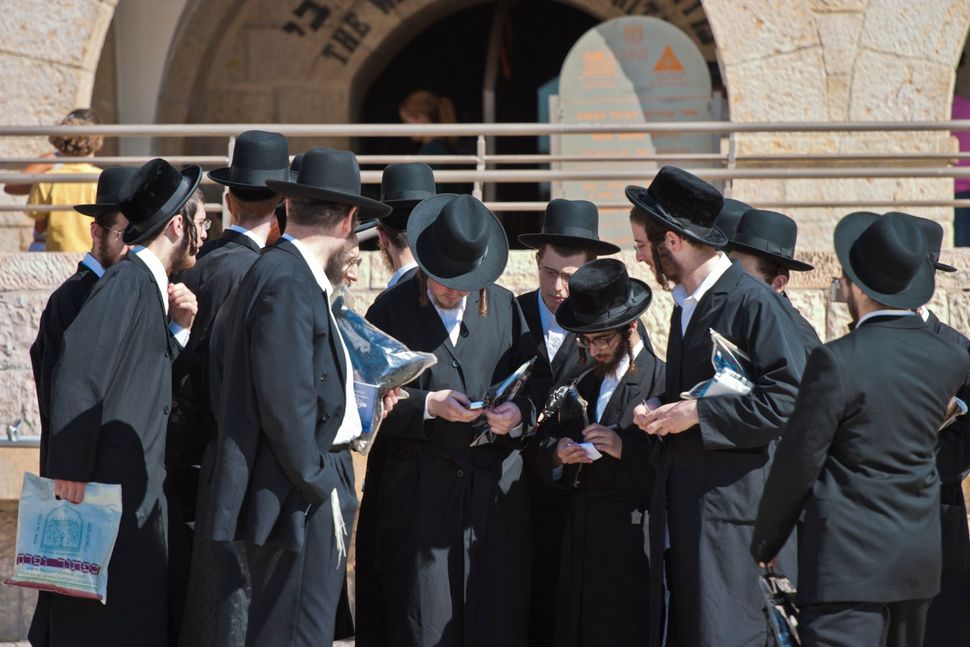 A joke was lately making the Orthodox WhatsApp circuits, via voice-note:

“A guy went to daven mincha in Borough Park,” it said, meaning to say the afternoon prayer in one of Brooklyn’s religious neighborhoods. “And he walked into a shul, but he was embarrassed to put on a mask because no one else was wearing a mask. Finally he saw someone in the back that was wearing a mask, he said: OK, I’ll put on a mask and sit with that guy in the back. He went to the back next to the guy, a Hasidic guy, the guy looked at him and said, ‘Oh, you also have Covid?’”

It was a typical joke of this moment, poking fun at the fact that members of many Orthodox synagogues in New York are indeed gathering without masks, disregarding the social-distancing rules during a pandemic that’s still all too real.

In other words, like all humor, it had an element of truth. After all, humor and satire expose difficult societal realities in a way few things can.

The joke didn’t cause much of a stir, because it was shared in private groups and not on public platforms, where community outsiders would see it. So it was taken in the spirit in which it was created — unlike another piece of satire that I recently shared, which came in for quite the backlash.

That video was a satire of the trend of erasing women in Orthodox forums like magazine covers, ads for lectures and children’s picture books. I had to share it.

Best WhatsApp-forwarded-video of the month — on erasing women. Watch this. pic.twitter.com/E22ryV9Piz

The video shows a young Orthodox man urging viewers to take modesty more seriously; he then begins to read the Rosh Hashanah Torah portion, bleeping out the name of Sarah the matriarch the way so many Orthodox publications erase women from their pages. Of course, Jewish law would forbid such an omission; carefully and properly chanting and enunciating each word is a central part of the rules for Torah reading.

It’s how most Jewish viewers would know the video was satire, reality amped up to a surreal level. The video was more than surreal — it was shocking, and — yes — even offensive. And therein lay its power.

In a culture spiraling into ever-new stringencies, where images of women and in some cases even women’s names are being totally erased, the video asks: Is the Haredi world truly that far off from this? What is next in the obsessive campaigns around women’s modesty? Are segments of the modern Orthodox community also going down that path?

And of course, there is the deeper theological question posed: If God’s Divine words do not shy away from portraying women — some of them quite radical for their times — why are we so uncomfortable with that same model today?

But a social-media firestorm was ignited this week when the photographer who filmed the satire, Laura Ben-David, identified herself in a tweet. When it turned out she was from the wrong corner of the community — modern Orthodox, not Haredi — the backlash was so severe she ended up deleting it.

Reactions threw around terms about “our community;” involved discussions of who “we” are, and who are “others,” as well as outcries about “mocking” the community. Others questioned tactics of achieving change.

Together, they were in effect asking: Are you sufficiently an insider to have the right to make such a satire? May we please see your membership ID? Are you married, who is your husband, how do you cover your hair, and where do you live?

The truth is, I get it. As an Orthodox person, I, too, sometimes experience this classic tribal reaction when someone from the outside disparages my community in a way that I think is unfair.

Membership in a certain imagined “community” with a capital “C,” and the question of who is allowed to speak for a group, or who is allowed to question the social norms in that group, is a constant discussion among Orthodox writers and bloggers, like it is among all groups. We have our own, and rather amusing, version of “cancel culture,” which dictates that one must be a full-fledged member, a real stakeholder, to make a legitimate social critique.

At a surface level, this is a fair request, especially from a community that sees itself as embattled — and is, on some levels. The problem is it is too often the case that one can only prove one’s membership by refusing to criticize, while criticism itself is used to disparage one’s very membership in the community.

It’s an effective way to silence critics, othering them at any cost, often by denigrating their observance levels and personal lives.

Even worse, policing the boundaries of who is allowed to criticize provides an easy deflection from the actual questions that satire asks of us.

When I write about frum satire, I don’t mean humor that mocks actual halakha or religious theology; I mean material that pokes at social phenomena. And these questions must be asked. Last year, when a friend sent me a flyer advertising an event featuring two men giving a lecture to young Jewish women about “the greatness of a Jewish princess,” I couldn’t help but create my own parody, advertising a lecture by myself and Shoshanna Keats-Jaskoll, an activist, entitled “The Secrets of Jewish Masculinity.”

You’ve seen the Greatness of a Jewish Princess, now get ready for

The Secrets of Jewish Masculinity!

The reactions were overwhelming: Hundreds of religious women and men alike responded, laughing in private messages and sharing it in their networks.

Of course, not everyone enjoyed it. It is to be expected that those who imagine themselves the vanguards of tradition will find parodies threatening. And satire is, perhaps, more threatening than a critical Op-Ed or a monologue video because it exposes reality with a humorous twist.

Meanwhile, other community members find it therapeutic. It’s certainly a boon for the community; a conversation is provoked, questions are asked, heads shake. Luckily, today, satire about frum social norms is more accessible than ever before. It’s easier to create and disseminate satire, thanks to the internet (and therefore all the more troubling to those who cannot stomach it).

It is satire that probes deeply, boldly and shockingly, that may be the thing that future generations will study about our moment in time. It captures the tensions within which we live, the new societal norms that we have invented for ourselves and that some members of a new generation may be chafing at. It may even give voice to those who feel voiceless, powerless, secretly frustrated but unable to articulate it.

Satire, like all fiction, exposes societal realities in a way that even journalism may not succeed. It takes us by surprise, makes us laugh (at times, uncomfortably), and empowers us to do the hard work within our communities.

We shouldn’t be asking if there’s room in the Orthodox community for satire. There has to be. If not, we are admitting that our community is not only humorless, but hopelessly, tragically, unwilling to improve.

Is there room in Orthodoxy for satire?