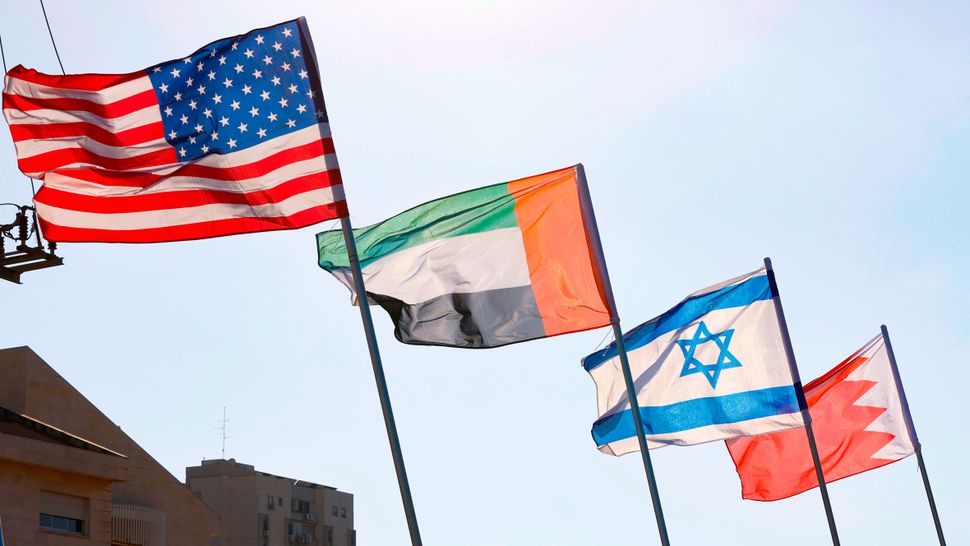 The truth is this opposition has been wildly overstated. In fact, the Arab League and the Organization of Islamic Cooperation have both issued a logical and a moderate road map for normal relations with Israel. Back in February of 2002, Saudi Arabia, a moderate Arab and Islamic country, suggested a plan known as the Arab Peace Initiative. The plan was considered reasonable and doable by no less august a person than Thomas Friedman at The New York Times, who called it “intriguing” and pushed Arabs to support it.

They did three months later in the Beirut Summit that same year, and it was later approved by the OIC and has been voted on unanimously at every Arab summit since, including the latest Arab foreign ministers meeting held on September 9th.

The Arab Peace Initiative proposes that Arab nations normalize relations with Israel so long as Israel withdraws to within its UN-recognized borders. The U.N. considers all areas Israel took in the 1967 war to be occupied territories.

In other words, the leaders of 422 million Arabs and 1.8 billion Muslims have sent Israel a very simple message: End that internationally declared illegal occupation and all 57 Arab and majority Muslim countries will have normal relations with you. Even more astonishing was the fact that the Arab Peace Initiative does not mention the right of return for Palestinian refugees and their descendants, using instead the ambiguous language to give Israel a veto on how the right of return would actually be implemented.

Instead of embracing this eminently reasonable compromise, Israel has ignored the Arab and Muslim olive branch. It has not only continued its occupation but has expanded it, transferring its citizens to occupied areas in contravention of international law; the settlement enterprise has been repeatedly deemed illegal by the International Court of Justice and the U.N. Security Council, as recently as January 2017.

There is an apt term for a country that refuses reasonable terms to end a half-century of civil rights abuses, and which continues to violate international law: a pariah state. And yet, while the Trump Administration used this term to justify not having normal relations with countries like Cuba, Iran, Venezuela, and North Korea, it refuses to use it when it comes to Israel.

It’s true that Israel is a democracy for the 80% of its citizens who are Jewish and living within the 1967 borders. But it is a total authoritarian military regime to the 4 million Palestinians living under its military occupation rule in the West Bank and Gaza. Life is controlled by the Israeli military who decides who travels and who can use water resources and controls all incoming goods and services on the borders. Meanwhile, when it comes to the settlers, an apartheid system has been established giving Jewish Israelis civilian legal treatment while the majority Palestinians are forced to live under military rule.

For a time, there was at least the pretense that this was temporary. Previous Israeli governments gave the appearance of wanting to make peace with the Palestinians, Syrians, and Lebanese, all of who have land occupied by Israel. But Israeli Prime Minister Benjamin Netanyahu’s government doesn’t even make superficial efforts. In fact, the very day that the United Arab Emirates broke ranks with fellow Arabs and Muslim countries to normalize relations with the Netanyahu regime, the Israeli prime minister politically threw the Emirates under the bus, announcing that the annexation of nearly one third of the occupied Palestinian territories was still on the table, though the Emirates only made peace on the condition of annexation no longer being a threat. It is unlikely that Bahrain will fare any better. Netanyahu has now on more than one occasion crowed about how easy it has proven to abandon the concept of land for peace.

While normalization is usually a good and decent act, leaders like Netanyahu see it only as an opportunity push opportunities for peace even further away. Such free political gifts from President Trump to Netanyahu are nothing more than enabling acts, which fail to deter the Israelis from continuing their occupation and rejecting peace overtures from the Arabs.

Stop calling the normalization of relations between Arab countries and Israel “historic.” It’s not just wrong; it falsely implies that Arab nations are the recalcitrant opposition of peace.

Arabs and Muslim countries as well as the Palestinian people want to have normal relations with the state of Israel as it is recognized by every country in the world – on the 1967 borders. The problem is Israel’s refusal to accept the international standards for sovereignty.

It is the Arabs who are waiting.

Daoud Kuttab is an award-winning Palestinian journalist and former Ferris Professor of Journalism at Princeton University. Follow him on Twitter @daoudkuttab.