Why Mike Pence, a proud Christian, represents me, an Orthodox Jew 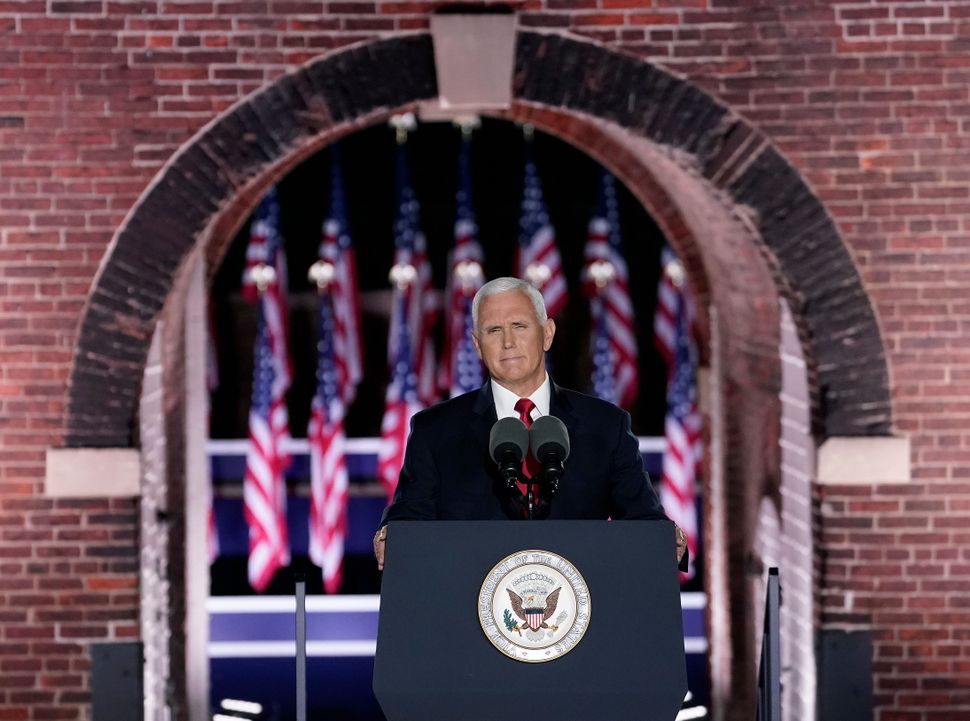 On Wednesday night, Vice President Mike Pence will face off against Sen. Kamala Harris, Joe Biden’s running mate, in the 2020 vice presidential debate. And I for one am looking forward to it.

It’s not that I’m an undecided voter. I’ve already made up my mind that I will vote for the Trump-Pence 2020 ticket, and I don’t expect to hear anything that will change my mind. But I am looking forward to seeing Pence.

I’m excited to see the Vice President not because I agree with all his policy positions or think he’s a great orator and enjoy hearing him speak. It’s because he has been a great leader for religious people in general and for Orthodox Jews in particular.

That Pence is a friend to Israel, a cause many Orthodox Jews hold dear, is no secret. Even before he became vice president, Pence was a staunch supporter of the Jewish state. “My support for Israel stems largely from my personal faith,” he told Congressional Quarterly in 2002. “God promises Abraham, ‘those who bless you, I will bless, and those who curse you, I will curse.’”

Of course, since joining Trump on the ticket, Pence has supported the administration in moving the U.S. embassy to Jerusalem, withdrawing aid from the Palestinians, some of which goes to terrorists, and recognizing the Golan Heights. Most recently, the Trump Administration oversaw absolutely historic peace agreements between Israel and neighboring Arab countries.

Detractors will rightly argue that pro-Israel is not the same thing is pro-Jews. But it’s not just Pence’s foreign policy that has gained him support in our community. It’s his larger view of life — specifically, how deeply and unapologetically impacted it is by his religious beliefs.

Early in the Trump presidency, the Washington Post reported that Pence never eats alone with a woman other than his wife Karen, and that he won’t attend events that serve alcohol without her by his side.

This became known as the Pence Rule and was widely misunderstood, mocked, misrepresented as something sinister and outright ridiculed. Even Kamala Harris, now his opponent, jumped at the chance to attack his faith. “I disagree with him when he suggests it’s not possible to have meetings with women alone by himself,” she told Politico. “I think that’s ridiculous — the idea that you would deny a professional woman the opportunity to have a meeting with the vice president of the United States is outrageous.”

But Pence’s rule is not about denying women opportunities; it’s about making sure you are living by your values every minute of the day.

It’s something we Orthodox and Haredi Jews are well versed in. We, too, have a rule about not being alone with a woman who isn’t your wife or a man who isn’t your husband. It’s one of a few things that unites us with evangelicals, many of whom adhere to the practice known as the Modesto Manifesto, which Pastor Billy Graham created. It was meant as a display of integrity, a means of avoiding sexual temptation, just like our rules of yichud — not being alone with members of the opposite sex.

This isn’t something we choose to believe in; it’s a tenet of our larger belief system that is not optional. And yet, it’s not something we can discuss openly without facing the mockery, derision, and blowback Pence faced.

And though I was dismayed at the media reaction to Pence’s adherence to his religion, I was also happy that it did garner attention. To have this in the national news helped bring this issue to the forefront and normalized it somewhat. It made us Orthodox Jews feel less alien to the culture at large.

There’s another front on which Pence is a friend to religious Jews. He has since his days as Governor of Indiana has been a champion of religious liberty, and not just for evangelicals.

I signed SEA 101 today to ensure religious liberty is fully protected under IN law http://t.co/vCOASZBZnH pic.twitter.com/CMFJh6aLDx

He has been a strong supporter of Indiana’s private-school voucher program, a meaningful position for Orthodox Jews who largely send their kids to private school. And in 2015, Pence signed a state bill protecting religious liberty, hailed by local Orthodox Jewish leaders as positive.

Now, together with President Trump, he is backing another proudly religious person for the Supreme Court — Judge Amy Coney Barrett.

Listening to Pence talk, I feel that he represents my interests and my fears as a Haredi Jew. He is a friend to the faithful, and, like me and my community, he does not compromise on his religious beliefs, even when they are unpopular, even when they come in for mockery.

In this sense, he is something of an avatar for Orthodox Jews in public life, despite being an evangelical Christian.

So although I am a decided voter and know that this debate will not reveal anything I don’t already know nor will it change my mind about anything, I am looking forward to seeing Pence represent me on a national stage.

Why Mike Pence, a proud Christian, represents me, an Orthodox Jew