What the current crisis shows about Haredi leadership and politics 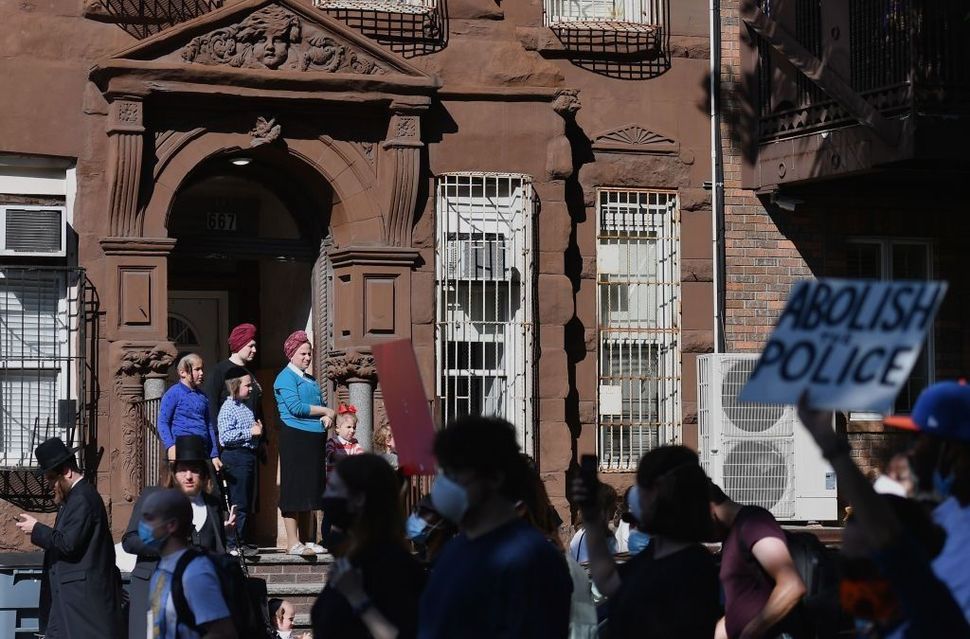 Members of the Orthodox Jewish community watch as protesters walk through the Brooklyn borough on June 3, 2020, during a “Breonna Taylor and Black Lives Matter” protest in New York City, after the recent death in Minneapolis police custody of George Floyd. – Derek Chauvin, the white Minneapolis police officer who kneeled on the neck of George Floyd, a black man who later died, will now be charged with second-degree murder, and his three colleagues will also face charges, court documents revealed on June 3. The May 25 death of George Floyd — who had been accused of trying to buy cigarettes with a counterfeit bill — has ignited protests across the United States over systemic racism and police brutality. (Photo by Angela Weiss / AFP) Image by ANGELA WEISS/AFP via Getty Images

The protests against COVID-19 restrictions by Haredi Jews in Brooklyn last week, which included burning masks and an attack on a Haredi journalist, were shocking.

They seemed to represent a blatant defiance of public-health norms and plain old common sense. And they mark a new stage in the evolution of the Haredi community in the United States, one at odds with an earlier period characterized not only by insularity and separatism, but an essentially submissive orientation toward the state.

What do the events of last week tell us about Haredim and the current moment?

First, the long-standing political alliances that Haredim have built with local and state political officials are failing in the midst of the coronavirus crisis.

Since the late 19th century, Haredim have been willing to engage with secular political leaders in order to advance the interests of the community. This stems from an even longer tradition in Jewish history of the figure of the shtadlan, or designated intercessor on behalf of the kehilah (community) with non-Jewish political or religious authorities.

This tradition has been updated and refined by Haredim. For decades, Haredi leaders have boasted of their ability to make a single call to reach the governor or mayor. Conversely, secular political leaders boast of their fine relationships with Hasidic rebbes in New York, who have the ability to mobilize followers to deliver a bloc vote in support of a particular candidate.

Both parties to the alliance understand that its benefits are mutual. But the carefully built network of political engagement that has arisen since the Second World War appears to be unraveling in the coronavirus crisis. Mistrust in the Haredi community has reached the almost unimaginable point that Gov. Andrew Cuomo — a Democrat who, like his father, Gov. Mario Cuomo, was long regarded as a friend — is seen as hostile and even antisemitic because of his crackdown on social-distancing in Orthodox and other New York neighborhoods seeing coronavirus rates spike.

Second, the hierarchical leadership structure in the community, especially among Hasidim, has broken down. In Hasidic Judaism, the authority of the grand rabbi, or Rebbe, has traditionally been deemed absolute. The Rebbe is revered and venerated — to the point that in traditional Hasidic lore, a Rebbe is deemed capable of intervening on behalf of his community with God.

Hasidic Rebbes and other revered rabbinic leaders could have played a constructive and proactive role in recent months consistent with the paramount principle of pikuah nefesh, saving a life. But they have failed. Most have been reactive at best, and none have used the hierarchical and organized structure of their communities to their advantage by, for example, insisting that their followers divide into small pods of families or neighbors for the purposes of constituting a minyan or celebrating holidays.

**Missing Broadway? Learn about the stars of the Yiddish stage with pics from the Forward on Urban Archive. **

Such measures could have prevented much infection within the community, and been a model for others of how a tight-knit and disciplined community can deal with and overcome COVID-19.

Instead, Haredi communities have joined with Christian groups to assert their “religious liberties,” an ever-expanding term that confuses discrimination with the state’s right to preserve the health of its citizens. Agudath Israel of America, the mainstream Haredi organization, has filed suit in federal court arguing that Governor Cuomo’s order restricting large gatherings “singles out and discriminates against all houses of worship — and synagogues in particular — by imposing occupancy and gathering restrictions that make it impossible for Orthodox Jews to comply with both their religious obligations and the Order.”

This closely resembles the language of Christian groups across the country who have argued in court recently that their right to the free exercise of religion trumps the state’s right to guarantee public safety and well-being.

The current contretemps reveals a surprising third take-away: that Haredim, like other Americans, are subject to a process of assimilation to the norms of the host society. This includes the hyper-litigiousness — and accompanying legal sophistication — of Haredi groups such as the Satmar Hasidim, who often eschew the longstanding taboo on not seeking recourse in secular courts. We can see in the recent claims regarding r “religious liberties” that they know how to pick lawyers, shop for the most suitable legal forum, and craft legal arguments in American courts as well as anyone around.

And what we have witnessed recently in the Brooklyn demonstrations is yet another sign of assimilation. The emergence of an anti-establishment, libertarian, right-wing element within the Haredi world parallels exactly what we notice in disaffected white, working-class groups across the country.

It wasn’t just the signs carried by the Haredi protesters in Brooklyn saying “We Will Not Comply” — a version of the right-wing mantra “Don’t Tread on Me.” It was the many banners waved on behalf of President Donald Trump, whose philandering and race-baiting were conveniently forgotten.

Haredi supporters favor Trump the tax-cutter, Israel-supporter (yet another irony given the traditional hostility of Haredim to Zionism), and defender of the working man (and not so much woman). This points to a shift in Haredi political behavior, at least among some, from an older transactional model, whereby success was measured by the capacity of the politician to deliver tangible benefits, to a more ideological and personality-driven model for which Donald Trump is the model. Herein lies another step in the Americanization of the Haredim, one effect of which may be a loss of the clear-headed capacity to pick a political winner.

David N. Myers teaches Jewish history at UCLA; he is the co-author, with Nomi Stolzenberg, of a forthcoming book, “American Shtetl,” on Kiryas Joel, a village of Haredi Jews in upstate New York.

What the current crisis shows about Haredi leadership and politics