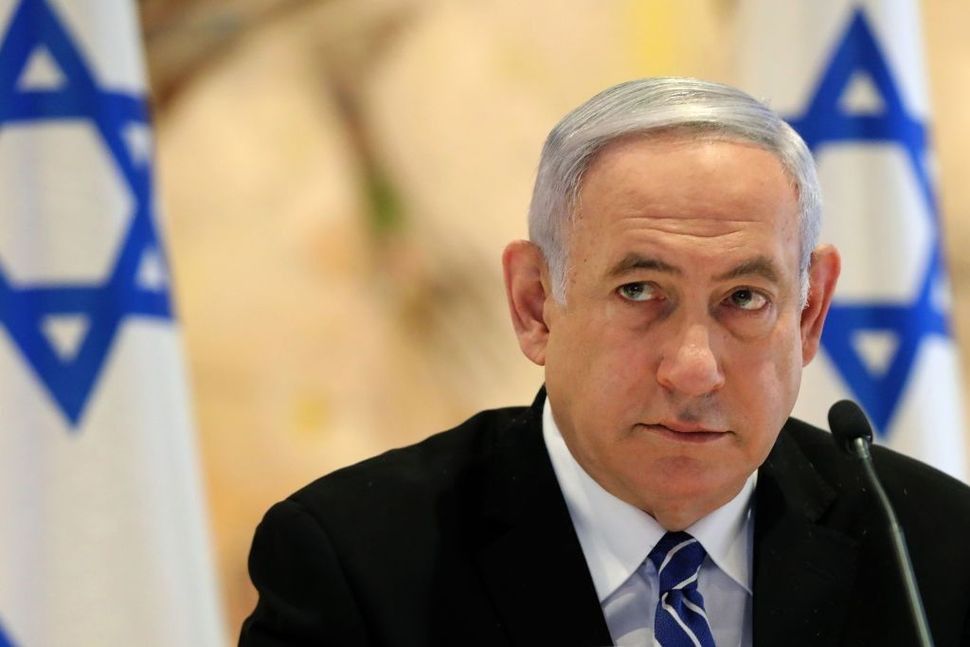 Israeli Prime Minister Benjamin Netanyahu attends a cabinet meeting of the new government at Chagall State Hall in the Knesset (Israeli parliament) in Jerusalem on May 24, 2020. (Photo by ABIR SULTAN / POOL / AFP) Image by ABIR SULTAN/POOL/AFP via Getty Images

As New York targets neighborhoods, including those with many Haredi Jews, where COVID-19 outbreaks have spiked, Israelis can only look on with envy. For the past three weeks, the country has been in a nationwide lockdown to contain a world-high infection rate, that is primarily concentrated in Haredi areas.

But rather than focus on those hotspots, Prime Minister Benjamin Netanyahu has cowered to the demands of the religious parties in his coalition, who hold the key to his political survival and possibly protection from the criminal-justice system.

It is comparable to Gov. Andrew Cuomo shutting down all of New York State because of the outbreaks in Queens and Brooklyn.

For much of the last two months, Israel has either had the world’s worst rate of coronavirus or close to it. By late summer, the infection rate (positive tests) hovered near 15%, compared to about the current 5.8 % in neigborhoods in New York under new pandemic restrictions.

In early September, Israel had the highest daily rate in the world in new infections, with its death rate exceeding the U.S. Critics have called this the worst debacle since the Yom Kippur War, when Israel was caught off-guard.

How did a country so renowned for pivoting quickly to confront national emergencies, the vaunted “start-up nation,” become the poster child for mismanaging this crisis? The answer is Netanyahu’s acquiescence to the religious parties, his most reliable coalition partner whose Haredi communities account for 40% of the infections, and a prime minister who lost interest and subsequently control of the pandemic.

During the first wave of the virus, Israel managed to largely contain the danger by closing borders and much of the economy while enlisting a public’s largely disciplined adhesion to restrictions. Netanyahu, then in the midst of coalition negotiations for a new government, appeared regularly on television to warn about the dangers of the pandemic.

The seeds of mismanagement and distrust were planted with the formation of a new coalition government in April, established with the pretext to contain the pandemic. While the country was in lockdown, forcing massive unemployment and economic hardships, the largest government in Israel’s history was created, with perks and budgets for all. The message was business as usual for petty coalition politics.

Netanyahu boasted that other countries saw Israel as an example on how to contain the crisis — and then removed restrictions too fast, a full and uncontrolled opening of schools and the economy, resulting in packed synagogues, wedding halls, bars and restaurants. Netanyahu himself told the public, “Go out and have a beer.”

It was testimony to his arrogance, summed up by the Israeli expression “yehiye b’seder,” (it will be O.K.).

This shortsightedness was compounded by a failure to implement rapid contact-tracing, recommended by a team of experts but ignored by the government caught up in bureaucratic infighting as to which ministry would be in charge.

Had leaders looked to the example of other small countries like Korea, Taiwan and Singapore, they would have found more effective responses: aggressive testing, rapid contact-tracing and strict quarantine. Israel could have done the same. But Netanyahu again allowed political considerations to prevent that response, not wanting his defense minister, a political rival, to gain credit for any success.

Trying to learn Yiddish but getting stiff trying to study at your desk? Stretch it out with yoga in Yiddish with Reyna. Watch here.

During the summer, COVID cases climbed from the double digits into the hundreds of cases per day. That should have set off alarms. Yet Netanyahu was rarely seen in public or working on the health crisis. Instead, his attention seemed focused on his upcoming corruption trials, the possibility of annexation in the West Bank, and a peace accord with the United Arab Emirates.

As daily cases ticked up to thousands, there were public calls for a coronavirus czar, but Netanyahu was reluctant to turn over the spotlight. And when the virus reached more than 8,000 new infections per day — comparable to over 200,000 in the United States — and public pressure demanded an expert be put in charge, the prime candidate for the position turned it down, concerned he would not be given authority to do what was needed.

That same night, July 23, Netanyahu called Prof. Ron Gamzu, head of Tel Aviv’s Ichilov hospital, who — much to his regret later — agreed to take the position without being given the necessary authority to act.

By this time, protests erupted around the country and particularly outside the Prime Minister’s residence in Jerusalem, where thousands gathered weekly, calling for Netanyahu’s resignation after 11 consecutive years in office.

The vast majority of coronavirus hotspots were in Haredi communities and the Arab towns in the Galilee. Both sectors have large families living in congested quarters, and both were flouting the restrictions of large gatherings.

Gamzu had called for a ‘traffic light’ system, putting severe restrictions on the cities and neighborhoods where the virus proliferated, looser rules in the rest of the country. The Arab leaders agreed. But the religious parties, who hold the balance in the coalition and thus the key to Netanyahu staying in office (and possibly out of jail) objected.

They pointed to the allowing of protests as a double standard, though there is no evidence that the protestors, mostly masked, outdoors and keeping distance, spread the virus. That argument also appealed to Netanyahu, who had become obsessed about the demonstrations against him.

Disregarding the advice of Professor Gamzu, Netanyahu led the government to impose another national lockdown in September that continues into this month. The economy is again taking a huge hit. Thousands are out of work, children are out of school.

For the Haredim it is life as usual. Many of their rabbis ignored or called for disobeying the government restrictions. Synagogues and yeshivas are crowded. Mass gatherings, without masks, continue largely without interference from law enforcement.

Anti-Haredi fury has reached a boiling point, even among the right, their traditional allies. As for the center and left, it has crystalized the costs of extortion by the religious parties as never before.

While coddling the ultra-religious, Netanyahu and his government have moved to curb demonstrations, specifically outside the Prime Minister’s home in Jerusalem, adding to the public outrage and the erosion of democratic standards.

Even if the draconian methods succeed — there is evidence of a drop in the infection rate — lasting damage has been done. The fissures between secular and religious Israeli Jews have widened to the breaking point. The healthcare system has come under enormous strain. And the use of the pandemic by Netanyahu and his supporters to stifle protest and criticism has undermined Israeli democracy.

More Israelis have died from COVID-19 than in all of the terrorist attacks in the country’s history. There is a uniquely Israeli expression for such failure, “mechdal,” a Hebrew word, loosely meaning breakdown or huge blunder. In the past, this has led to the resignation of governments, with leaders taking responsibility. For Netanyahu, the only prime minister to remain in office despite criminal indictments, there is no expectation that he would hold himself accountable and leave.

Perhaps when the pandemic has subsided, there will be a political and historical reckoning over Israel’s dramatic failure to handle it. But the damage to Israel’s social and democratic fabric, and particularly the rupture of the religious-secular divide, will remain for a long time.

Harry D. Wall is a writer and video producer who lives in Tel-Aviv.