Jewish law should guide us in November: Choose life (not Trump) 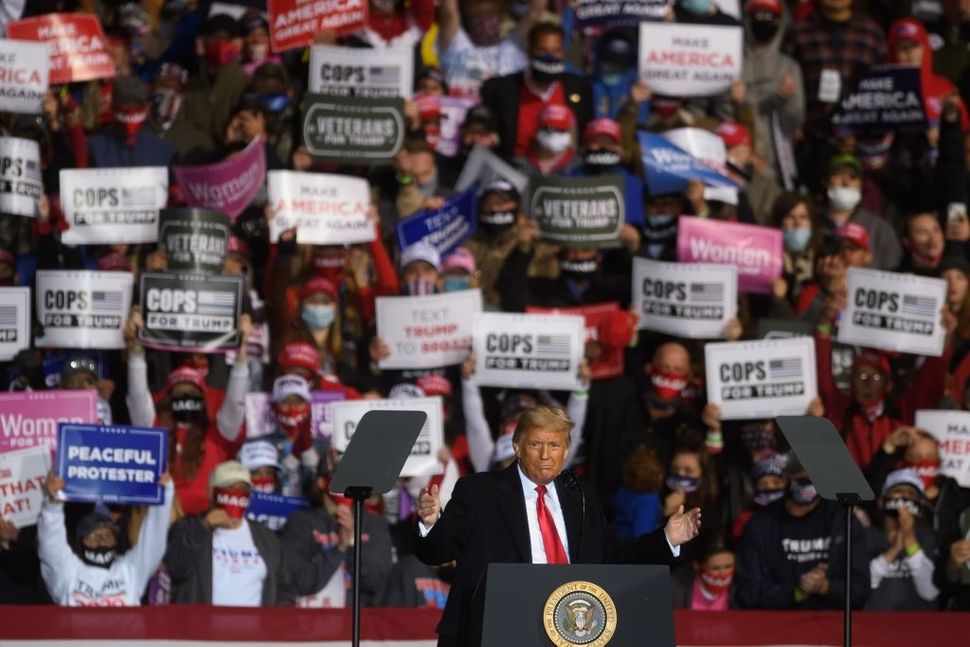 JOHNSTOWN, PA - OCTOBER 13: U.S. President Donald Trump speaks to supporters at a rally at the John Murtha Johnstown-Cambria County Airport on October 13, 2020 in Johnstown, Pennsylvania. White House physician Dr. Sean Conley declared on Saturday that the president is “no longer considered a transmission risk to others,” while those in attendance had their temperature checked and masks were said to be required. (Photo by Jeff Swensen/Getty Images) Image by Jeff Swensen/Getty Images

Rabbi Joseph Soloveitchik famously said that when someone comes to him for a decision on a matter of Jewish law, he can easily give them a ruling. But when someone seeks advice in choosing between two options that do not violate Jewish law, he said, individuals must make a personal decision.

Though a democracy defines voting as the ultimate in personal decisions, I believe the 2020 election belongs in the first category. When one choice is a candidate who wants to listen to science that aims at protecting lives, while the other can only mock his opponent for wearing a big mask, the choice is not neutral as a matter of Jewish law.

There is no value more primary to Jews than that of human life, as Deuteronomy 4:15 teaches: “You should guard your souls carefully.” Our incumbent president has a vicious disregard for human life, taking no steps to ensure that his citizens will be as safe from disease as possible.

Instead he asks supporters to take risks to come to crowded rallies without masks. He refuses to disavow white supremacy or urge supporters to refrain from violence if they are unhappy with the election’s outcome. He doesn’t care about the established law of the land, refusing to promise a peaceful transition of power and saying that we should just throw out all ballots.

We Jews have a ladder of values that helps determine how to make decisions. One thing is clear from a multiplicity of situations — choose life (Deuteronomy 30:19). For us, it means existing lives take priority over unborn ones, and that we are against the modern uses of the death penalty. It also means that although Shabbat observance is of primary significance, we are obligated to violate that observance when a life can be saved.

As Rabbi Asher Lopatin wrote on MyJewishLearning.com, “Built into every mitzvah — with some exceptions — is the precedence of human life.”

So it could not be any clearer to me that when there is a political leader who is actively promoting behaviors that have led — and will continue to lead — to the death of many of his citizens, anyone who professes Jewish values should not support such an individual.

We now know from his taped interviews with Bob Woodward that President Trump understood how dangerous the coronavirus was back in February, but kept saying publicly he believed it would blow over by Easter Sunday. That is tantamount to murder, since those who listened to him may have put themselves at deadly risk because of his supposed desire to prevent panic.

The examples multiply: he tried to get federal agencies to discount their own research about safety in order to get schools to open; and when he himself became infected, Trump was cavalier about exposing Secret Service agents, White House colleagues, and their families to this deadly disease.

There are many Jews who, reviewing this record, feel “yes, but” — noting that this same President Trump moved the American embassy in Israel to Jerusalem from Tel Aviv and otherwise supported the Jewish state and other causes they care about. There are rabbis who support Trump, believing that he is a force against secularism. There are rabbis who support Trump because they fear anti-Semitism on the left.

To both of those I would say: Jews need to be guided by our primary values and prioritize a candidate concerned with the health of all humans. We are all equally created in the image of God, according to Genesis 1:26, which will be read across the Jewish world this week as part of the beginning of the annual Torah cycle.

There are many ways to learn about a candidate; the Talmud in Eruvin 65b teaches that a person is known by his cup (how he behaves when drinking), his pocket (how he behaves in financial dealings with others) and his anger. President Trump does not drink, but the other two criteria are telling. The New York Times’ investigations have revealed his failure to pay millions of dollars in taxes. His anger was on display at the presidential debate to such an extent that commentators could only resort to profanity to describe the spectacle.

I am not a rabbi, but I have taught Jewish studies at a number of universities and written articles and books on the Hebrew Bible. My years of studying Jewish texts lead me to this conclusion: Jewish values point to a particular choice this time.

To be religious means that you believe every human is equally made in the image of God and every life has equal value because it was given by God. That entails doing all you can to create means by which as many people as possible can remain healthy; human life has to be the ultimate bottom line in any religious view of the world.

Jewish law makes clear that choosing life, and keeping ourselves healthy, takes priority over almost anything else. A leader who disregards the value of human life does not deserve power of any kind.

Beth Kissileff is the co-editor of “Bound in the Bond of Life: Pittsburgh Writers Reflect on the Tree of Life Tragedy,” and editor of “Reading Genesis: Beginnings” and the forthcoming Reading Exodus: Journeys.

Jewish law should guide us in November: Choose life (not Trump)