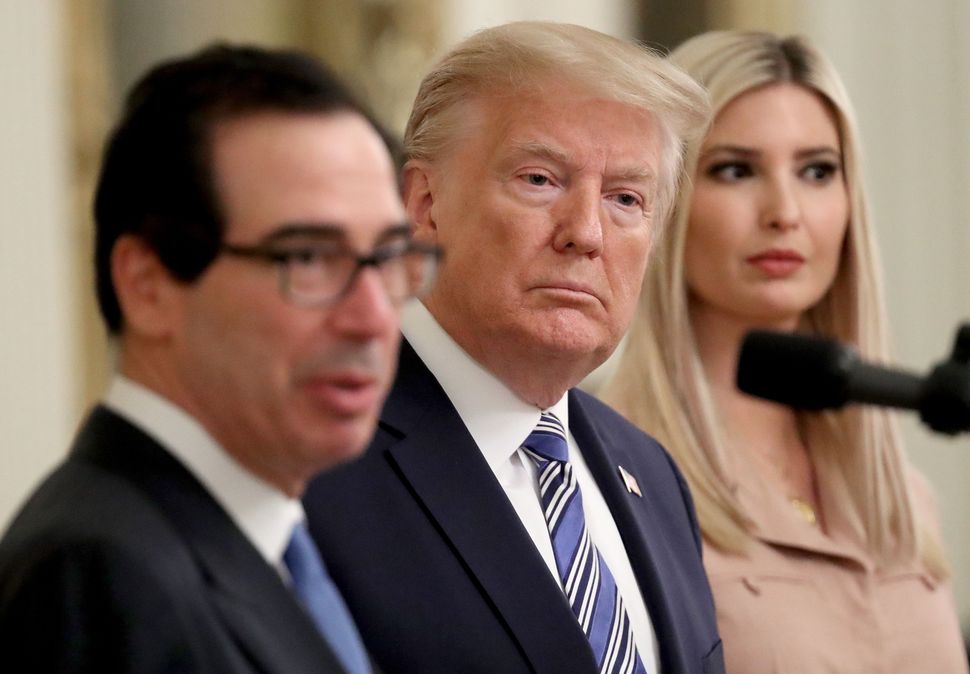 WASHINGTON, DC - APRIL 28: U.S. President Donald Trump and his daughter Ivanka listen as U.S .Treasury Secretary Steven Mnuchin speaks during an event on supporting small businesses through the Paycheck Protection Program in the East Room of the White House April 28, 2020 in Washington, DC. An total of $659 billion has been allocated for small business loans in coronavirus relief bills passed by Congress. (Photo by Win McNamee/Getty Images) Image by Win McNamee/Getty Images

Toward the end of the 2016 campaign, when it appeared certain that Hillary Clinton would make history as the nation’s first woman president, a running joke on Twitter depicted the dilemma of Trump campaign officials seeking work after November: An imagined job interviewer, seeing a peculiar resume gap that covered the presidential campaign season, inquired if the applicant had worked for the Trump campaign.

I was reminded of this last week when The Washington Post published an article about the struggle awaiting Trump officials seeking work in Washington if the president loses. It highlighted the embarrassing trajectory of Sean Spicer, the former White House Press Secretary, who found himself appearing on Dancing with The Stars and hosting a talk-show on Newsmax, a tertiary conservative news organization, rather than the comfortable corporate landings of his predecessors at that podium.

From the moment after the 2016 results were in, Trump’s opponents have been obsessed with ensuring he would not become “normalized.” For people of a certain social and professional status, this meant no return to polite political society for those who would debase themselves by serving this particular president

If Trump loses, the question of social exclusion will no longer be a mere fantasy. In deciding which political appointees from this corrupt, bigoted, and inhumane administration to shun, a rough division between those who served the country and those who enabled the president is helpful.

It is difficult, but not impossible, to establish this dichotomy in reviewing the Trump administration’s members. After all, there were always exceptions to the “no normalization” maxim, and even some fierce Trump critics urged those with foreign and defense policy experience to join the administration in hopes of keeping it grounded in reality,

Many of us were relieved, for example, when Jim Mattis was named Secretary of Defense, and few complained when the cerebral Lt. Gen. H.R. McMaster replaced Michael Flynn as National Security Advisor. Surely neither of these men, or others who quietly prevented Trump from doing even more damage to the country, should be shamed for what they did.

Similarly, it does not take a Trump fan to acknowledge the professionalism and hard work of someone like David Schenker, a scholar of the Arab world who serves as Assistant Secretary of State for Near Eastern Affairs. Robert Lighthizer, the U.S. Trade Representative, is a former Reagan administration official who is untainted by the daily scandals of the Trump White House. The impeachment hearings featured honorable professionals like Fiona Hill who took a chance on the administration, and there are probably dozens if not hundreds of such individuals toiling anonymously across the federal government’s agencies.

In an administration staffed with unqualified hacks and nepotism cases, these experts and specialists deserve our thanks and appreciation. Those who may not still don’t necessarily deserve to be treated as outcasts.

But then there are those hacks and nepotism cases who should never have been allowed to serve in the positions they held and often abused. In a just world, they would never find political or policy work outside the Trumpian cesspool without a sincere public repudiation of their “service.”

Some, like Attorney General William Barr, are former Washington grandees who disgraced themselves in office. Others like Ric Grenell, Dr. Scott Atlas, and Mike Pompeo were never particularly respected in policy circles but now carry titles like “Ambassador,” “Advisor to the President,” and “Secretary” that think tanks, universities, nonprofits, and corporations often find irresistible.

On top of the unqualified toadies, there are the untouchable evildoers. It shouldn’t be controversial to say that any institution that treats Stephen Miller as an “immigration expert” or fetes Michael Caputo will have discredited itself, perhaps beyond repair.

The problem is not limited to Washington: Jewish communal organizations will face this conundrum as well. Even those nonprofits whose finances have been wrecked by the pandemic should resist the temptation to view Jared Kushner and Ivanka Trump as donor prospects. On the expertise front, while Arutz Sheva contributor David Friedman would’ve been considered too uncouth for mainstream Jewish organizations, former Ambassador David Friedman will probably be received well — unfortunately.

It will be tougher to assess the figures who fall into a gray area: individuals who did not serve in essential national security and foreign policy positions, and were not necessarily complicit in President Trump’s abuses of power. I’m thinking of economic policy officials like Secretary Steven Mnuchin, former economic advisor Gary Cohn, and his successor, Larry Kudlow.

This is an unpleasant conversation, but I believe it’s a required one. With Trump’s election and subsequent presidency, we know our country can be brought to its nadir by a single thoroughly immoral man.

In case Trump is reelected or a future Trump-like figure rises to power — from the right or the left — we must incentivize responsible professionals to serve responsibly and deter venal people from taking a joy ride on the backs of the American people.