We can’t give up on Trump voters. They’re family – in my case, literally. 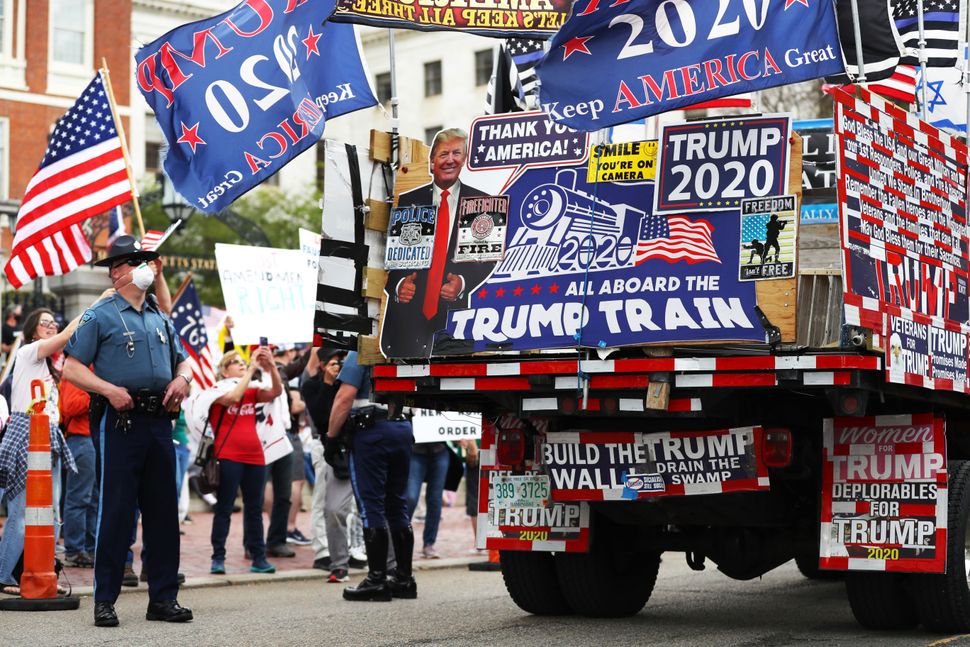 I recently shared a (socially distanced) meal on a Jewish holiday with an Orthodox rabbi I know and his family. The subject of President Trump came up, and I shared the perspective of an Israeli diplomat who felt that for all the hype, the Trump administration has been bad for Israel. The rabbi, a brilliant, sensible and compassionate man, was surprised. “I’ve never heard that perspective before,” he told me.

His surprise would certainly surprise a lot of American Jews, most of whom view Trump’s record on Israel and antisemitism the way the Israeli diplomat does — as an abysmal failure. But these Jews, too, have a blind spot: They simply cannot comprehend how their fellow Jews could support Trump.

I can. I was raised with these Jews. They are my closest family and friends. And we have to understand that when this is all over, we can’t just throw them away.

I was educated in Modern Orthodox institutions and involved in traditional synagogues. I view myself within these communities, not on the outside. But it’s not just through my Orthodox connections that I know people who support the president.

Along with being mainly Orthodox, the community I was raised in is — like me — 50% Mizrahi, though Mizrahi observance doesn’t always fit neatly into denominational boxes. And it should not come as a surprise that the experience of Mizrahim, often first-generation Americans, is vastly different from Ashkenazi Americans, many of whose ancestors arrived in the United States 150 years ago. This colors their politics, as everyone’s experiences do.

My grandparents were raised in Tehran, and they were thrilled when Trump killed Qassem Soleimani, a notorious Iranian terrorist in charge of the Quds Force and its clandestine operations. They are open about the fact that what they are looking for in a leader is someone who rules with an iron fist and bullies the world into respecting our country. The world as they see it is a cruel place full of others waiting for a sign of weakness to take advantage of innocents. In Trump, they see a protector.

On my other side, my relatives from Uzbekistan are also drawn to Trump. They shudder at the thought of anything resembling socialism, and vividly recall the USSR providing welfare for everyone — except the Jews. They see in Trump a bulwark against the Left.

Meanwhile, my Iraqi cousins are over the moon at the seeming integration of Israel into the Arab world in the Abraham Accords, overseen by Trump, which normalized relations between Israel and the United Arab Emirates. They remember the long history of being tolerated at best and slaughtered at worst in Iraq, and believe they have witnessed something historic. They see in Trump a bringer of peace.

As for my Orthodox community, the thing you have to realize is that over the past 50 years, secular Ashkenazi Jews have seen their political values and cultural identities represented across this country in areas like government and the entertainment industry. Not so the Orthodox community. There are few actors, politicians and tech CEOs who are Shabbat observant or keep kosher. Jared Kushner and Ivanka Trump are probably the first Orthodox Jews that the average American has even heard of since Joe Lieberman. And they’re not the only ones in Trump’s sphere: From David Friedman to Avi Berkowitz, the Trump administration is not shy about placing Orthodox, visibly observant Jews in high levels of government, especially in positions overseeing its Middle East policy.

The Orthodox community feels pride towards Trump’s embrace of these representatives, and though Trump’s reputation as a womanizer and a narcissist does privately bother many religious Jews, it’s insignificant to them compared to his perceived contributions to the Jewish community. Despite Trump’s words and actions, from the perspective of the religious Zionist community, he has been more friendly to the version of Israel they revere than all U.S. presidents prior.

This does not mean he protects Israel’s national security interests per se, but that he has legitimized the Jewish presence in religiously and historically significant areas, sites the Orthodox community connects to far more than it does to Tel Aviv and Eilat.

Of course, many American Jews will point to Trump’s rhetoric empowering white supremacists as reason enough to vote him out. But the vast majority of Orthodox Jews live in major urban centers or insular communities and have never encountered the right-wing racist agitators who assembled in Charlottesville and Kenosha. What they have experienced is antisemitism in the left-wing bastions where they live. From the Orthodox perspective, what is far more threatening is a progressive left that they see as anti-religious and anti-Israel.

I don’t agree with these people who are my friends and family. I’ve spent countless hours trying to persuade my relatives to train a more critical eye on Trump’s policies, even those that seemingly favor us. I’ve pleaded with my grandmother, desperately pointing out that Biden really does represent our family’s values. I’ve raised my voice far too often in discussions with my uncle about Israel’s security needs. Staying in these relationships requires emotional energy, and time, and frustration.

But as Jews, we have no choice — especially if we want to make the world reflect our values.

Sharing the part of ourselves that cares deeply about political issues is important, and we cannot expect people we never speak with to understand us.

It pains and shocks me that there are Jewish families being torn apart by this divide. There is no political issue that should threaten the strength of our families and the Jewish community in America. The key to avoiding this divide is to accept that the “quintessential Jewish American experience” tends to not apply to Orthodox or Mizrahi Jews, and to be cognizant of their varied life experiences.

Stop insisting that Jewish values are always progressive, that American Jews are always assimilated, and that a minority community is bigoted for wanting to protect its communal interests.

A real family does not allow itself to be broken by one leader. How the Jewish community reacts to this diversity of political opinions and the passions evoked by them will be a reflection of our strength, or lack thereof. If we cannot overcome this divisive moment, it says little about Trump and a whole lot about our intolerance of one another. We will have failed at the commandment to love our fellow Jew, and just as the Jews of the second Temple period were severely punished for this failure, so too will we see a decline of American Jewry should we go down this path.

It is my belief that Trump makes all Jews less safe. I hope that my community will be able to see this by November 4, but if they can’t, I promise to love them anyway.

Shanie Reichman is IPF Atid Deputy Director at Israel Policy Forum, based in NYC. Previously, Shanie interned for the human rights team at the Permanent Mission of Israel to the UN and at Hillel International’s Office of Innovation. She also serves on the board of the Center for Ethnic, Racial, and Religious Understanding and is a proud member of the Nash Didan community. The views reflected here are her own.

We can’t give up on Trump voters. They’re family – in my case, literally.