Why is this one different? Four (Jewish) Questions for this election 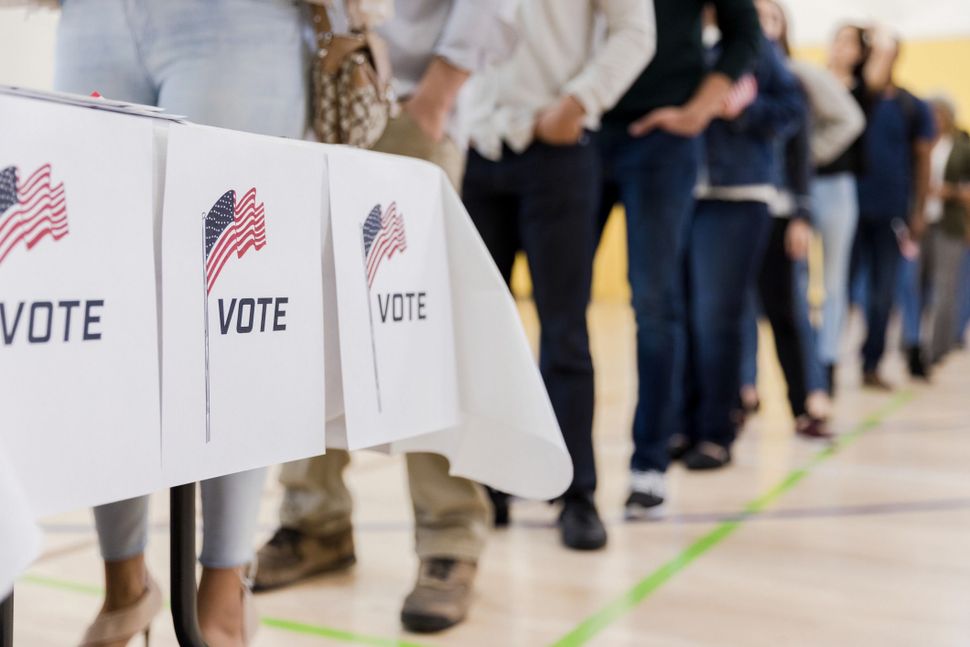 Why is this day-after Election Day different from all others? Because we truly don’t know yet who won.

Actually, it’s not different from all others. We’ve been here once before: Wednesday, Nov. 8, 2000. I was in East Lansing, Mich. I’d been sent there by the New York Times national desk because it was a swingy swath of a swingy state, with fiercely fought races up and down the ballot. My assignment was to do a feature story every day for two weeks on what life was really like in the battleground, and boy was I out of ideas by the time the final one published on Election Day. And then I had to write another.

Let’s hope 2020 is different from that chaotic recount 20 years ago. It looks like we should have a reliable result in less than five days this time, not five weeks, and hopefully it will be decided by voters and not by the Supreme Court.

But right now we have few answers, so I’m focused on questions. I’m much more of a question-asker than answerer anyhow, and I’m also the youngest child in my family. So, in the spirit of the Passover Seder, here are Four Questions for Jews to consider right now:

What did all that Jewish money buy? Michael R. Bloomberg, the former New York mayor and Democratic presidential aspirant, devoted $100 million to back former Vice President Joe Biden in Florida, where it looks like President Trump will beat him by a solid 3 percentage points.

And Bloomberg was hardly the only Jewish donor or group to target the Sunshine State, perhaps the only one where Jewish voters — there are about 650,000 of them — had a chance of swaying the outcome. The Republican Jewish Coalition spent at least $3.5 million to run ads on South Florida television, and the progressive group Bend the Arc said it was devoting “six figures” to digital videos, phone- and text-banking. IfNotNow had its members calling their Jewish grandparents in the state to make personal appeals.

Perhaps the biggest shift in Florida’s vote between 2016 and 2020 came in Miami-Dade County, the state’s most populous, with 2.7 million people — 1.9 million of them Hispanic, 123,000 of them Jewish. Biden won there, as Democrats always do, but only by 6 points — Hillary Clinton’s margin over Trump in the county was 30 points. It seems this was largely because Miami’s diverse Latino communities shifted to the president.

So I’m wondering: Did the Democrats spend too much effort targeting the Jewish community, while the Republicans focused on Latinos (or won Latinos by blanketing the general population)? It reminds me of the shift that Prime Minister Benjamin Netanyahu of Israel has made in his strategy towards United States public opinion — toward evangelical Christians, and increasingly Latinos, as the most reliable Zionists rather than American Jews. It was a view Trump seemed to share when he admitted at a Wisconsin rally that his recognition of Jerusalem as Israel’s capital was “for the evangelicals.”

What did young people do? There were a lot of predictions before Election Day for record turnout among millennials and Gen Z. In Texas, more than 1.3 million people under 30 voted early, surpassing the total of ballots cast by that age group four years ago.

The high turnout, overall, is perhaps the brightest light in this dark and divisive campaign. But it’s going to take a bit more time and a lot more analysis to understand what really drove the numbers up.

Given the generational gulfs among American Jews over Israel and other issues — which was on stark display during this year’s Democratic primaries — we should dig deep into the numbers to understand whether, where and how millennial and Gen Z Jews participated in this election.

Did the campus progressives that were all-in for Bernie show up for Biden? Were young adults focused more on climate change or the economy, the coronavirus or human rights abroad? What about the young Orthodox population, perhaps the fastest growing demographic segment of our community?

How can we bridge the deep divides in our community? One of the most pressing questions about the Trump era, one that political scientists will undoubtedly parse for decades, is whether he created the stark, ugly divisions playing out now in our society over immigration, race and other issues — or whether he just tapped into a vein ready to burst.

There’s a similar question for our community, where the divide is far more lopsided — more like 75-25 or 70-30 than 50-50, according to surveys of Jewish voters — but just as deep, just as vitriolic, and maybe even more painful, as inter-tribal conflicts tend to be.

A voter poll sponsored by the liberal Zionist organization J Street and conducted by GBAO Strategies breaks out Jewish voters by denomination (including no denomination) and party. Orthodox voters made up 10% of its sample — about the same as it is in the general population, according to the Pew Research Forum.

These Orthodox voters named the economy as the top issue determining their vote, and Israel (a distant) No. 2. Reform, Conservative and “no-denomination” Jews all put the coronavirus at the top of their list of concerns, and Israel way at the bottom — below climate change, health care, the Supreme Court, police reform, Social Security and Medicare.

We don’t need a poll to tell us about the deep divides in our community. We are split over Israel, certainly — not over whether it has the right to exist as a Jewish state, which more than 90% support, but over how to balance Palestinian rights to self determination with Israeli security, about the ongoing occupation of the West Bank and restrictions on travel and trade to the Gaza Strip, about what kind of democracy we can support.

We are also still divided on intermarriage — and even whether to call it “intermarriage.” We are divided on questions of religious liberty: Liberal and secular Jews tend to think of the separation of church and state as a way to protect our freedoms in a Christian country, while the Orthodox often align with Catholics and evangelicals in support of things like vouchers for private schools.

We are even divided on antisemitism, the thing that should unite us all, with too much focus on whether it’s more pernicious from the far-left or far-right.

Amid this profound uncertainty, we should remind ourselves of the Jewish values we share. Our tradition is founded on open, respectful debate. We believe in science, in facts, in truth-telling.

We care about democracy, and know that every vote must be counted — and that majority rules.

What would Rabin do? It’s easy to forget as we obsess about the margins in Wayne County, Mich., or absentees in Kenosha, Wisc., but today is also the 25th anniversary of the assassination of Israeli Prime Minister Yitzhak Rabin.

This horrific murder of a leader trying to make peace, by a religious Jew basing his action on a bastardization of Talmudic mandate, was perhaps the nadir of the modern Israeli experiment. In a special collection of essays we published this week in partnership with the Israeli social-justice organization BINA, writers from across all spectrums reflect on the assassination. Many of them imagine what might have happened if Rabin had lived.

Would there be a Palestinian state today? Might Israel’s political left be stronger, perhaps still in power? How might Rabin, a warmonger turned peacemaker, engage with Trump and Biden regarding the Arab world, or Iran?

What would he say about our hopelessly divided nation?

A lot to ponder. But I’ve got one more thing. It came Tuesday morning from a reader named Dick Goldsmith, who shared the email his son, Rabbi Howard J. Goldsmith, had just sent to his Cong. Emanu-El in Westchester County, N.Y. Rabbi Goldsmith said he and his wife were headed out to vote in their local school gymnasium, which he called “fitting.”

“In elementary-school gyms kids learn about pushing themselves to run faster and jump higher and exceed their perceived limits,” he wrote. “They learn about competition, how to work hard against classmates with sweat and heavy breathing and even a skinned knee or two. They learn about teamwork, the truth that we are stronger when we work together, when we take responsibility for others, when we sacrifice for the good of the whole. And, most of all, they learn about sportsmanship, about the respect and kindness and camaraderie that comes from recognizing that higher values and truths transcend competition, are more important than winning.”

I grew up going to vote with my mom in our elementary-school gym, and normally vote in a school here. I missed that this year, instead casting my ballot early by having my husband drop it off at a lockbox outside the town hall. I took a drive by the school where I usually vote on Tuesday, though, and thought about Rabbi Goldsmith’s words.

Pushing ourselves to exceed our perceived limits. Competition, but also teamwork and sportsmanship. Truths that are more important than winning.

Jodi Rudoren has been editor-in-chief of the Forward since 2019. Before that, she spent 21 years as a reporter, editor and digital innovator at The New York Times, including a stint as Jerusalem bureau chief and pioneering a masthead role on audience strategy. Twitter: @rudoren. Email: rudo[email protected]

Why is this one different? Four (Jewish) Questions for this election