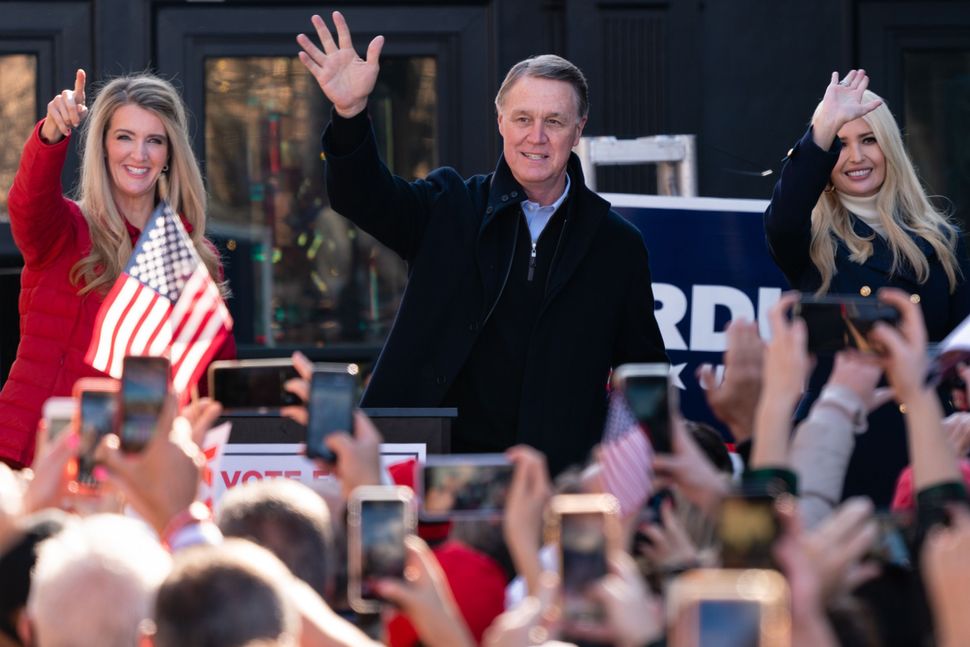 It’s rare to vote for U.S. Senate races knowing who holds the other 98 seats, but that’s where Georgians find themselves facing down a run-off election. And fellow Jews, if you’re still undecided, it’s time to vote strategically.

With Joe Biden heading to the White House and Democrats narrowly controlling the House, a Republican-controlled Senate is the country’s best chance to rein in the Democratic Party’s illiberal fringe. A Republican-leaning Senate would fortify liberals in intra-party debates and push national policies toward the political center.

This tilt away from leftists matters. Getting the country back to the center is important for many reasons. But it is especially important for Jews, for reasons that the Senate runoff has itself made clear.

This year’s Georgia Senate races have been notably ugly from a Jewish point of view. Antisemitism first became an issue in July, when Democratic nominee Jon Ossoff (rightly) called out a Perdue campaign digital ad that enlarged his nose.

This is the oldest, most obvious, least original anti-Semitic trope in history.

Senator, literally no one believes your excuses.https://t.co/PiA7P4O4M2

Meanwhile, Republican incumbent Senator Kelly Loeffler has dealt with her own extremist controversy. A recent photo showing Loeffler with white supremacist Chester Doles went viral, and her campaign was quick to disavow it.

But on the other side of the aisle, there have been problems, too. The Democrats running in the race seem to have lost their way on Israel. Ossoff previously worked for Congressman Hank Johnson, who has repeatedly campaigned with him. Recall that Johnson traveled to West Bank in 2016 on a trip with Miftah, which has been accused in the past of antisemitism and praising Palestinian suicide bombers. After his trip, Johnson described the Israeli settlers in the West Bank as “almost like termites.” And in lieu of an actual apology, Johnson tweeted his “apologies for offense.”

Ossoff appears untroubled by Johnson’s history or that of fellow Democratic Senate candidate Raphael Warnock. Last month, Ossoff stated that “Reverend Warnock is a beloved friend and ally of Georgia’s Jewish community and a friend of Israel.” But Warnock, too, has spoken of Israel in ways that belie claims to friendship.

In 2015, Warnock characterized Israel as “a land of violence and bloodshed and occupation.” Describing clashes between Israelis and Palestinians in 2018, Rev. Warnock sermonized, “We saw the government of Israel shoot down unarmed Palestinian sisters and brothers like birds of prey.” And in 2019, Warnock signed a statement comparing the West Bank to apartheid South Africa.

And it’s not just Israel. In 2013, Warnock called the Nation of Islam “important” to African Americans and central to keeping Black preachers “honest,” though the NOI’s leadership has been described by the Southern Poverty Law Center as “deeply racist, antisemitic and anti-LGBT.” Its leader, Louis Farrakhan, has compared Jews as “termites.”

Still, Warnock did recently write about the importance of resisting calls to condition aid to Israel, emphasizing that he opposes BDS. But we should wonder: Can we trust what he says? Are these statements more sincere than his past comments on Israel?

Recall that in 2018, Congresswoman Rashida Tlaib ran as a supporter of the two-state solution in her Michigan district’s Democratic primary. Only after she won that primary did she pivot to publicly supporting a one state solution to the conflict in the Middle East. Similarly, when Congresswoman Ilhan Omar ran in 2018, she first called the movement to boycott Israel “not helpful,” only to later announce her support for it after the election.

These two women, along with activist Linda Sarsour — also credibly accused of antisemitism — recently spoke at an event in support of Warnock, who did not disavow their efforts.

Jon Ossoff and Rev. Raphael Warnock are their own men. There’s no definitive proof that they’ll be the next Tlaib and Omar. However, their words and deeds also offer no real reassurance they’d be a reliable bulwark against the leftist wing of their party, which has a very real antisemitism problem.

For the sake of overall political moderation in Washington and Jewish safety in 2021 and beyond, undecided Jewish voters should vote Republican on January 5.

Melissa Langsam Braunstein, a former U.S. Department of State speechwriter, is now an independent writer in metro Washington. She can be reached at BraunsteinLetters@gmail.com.