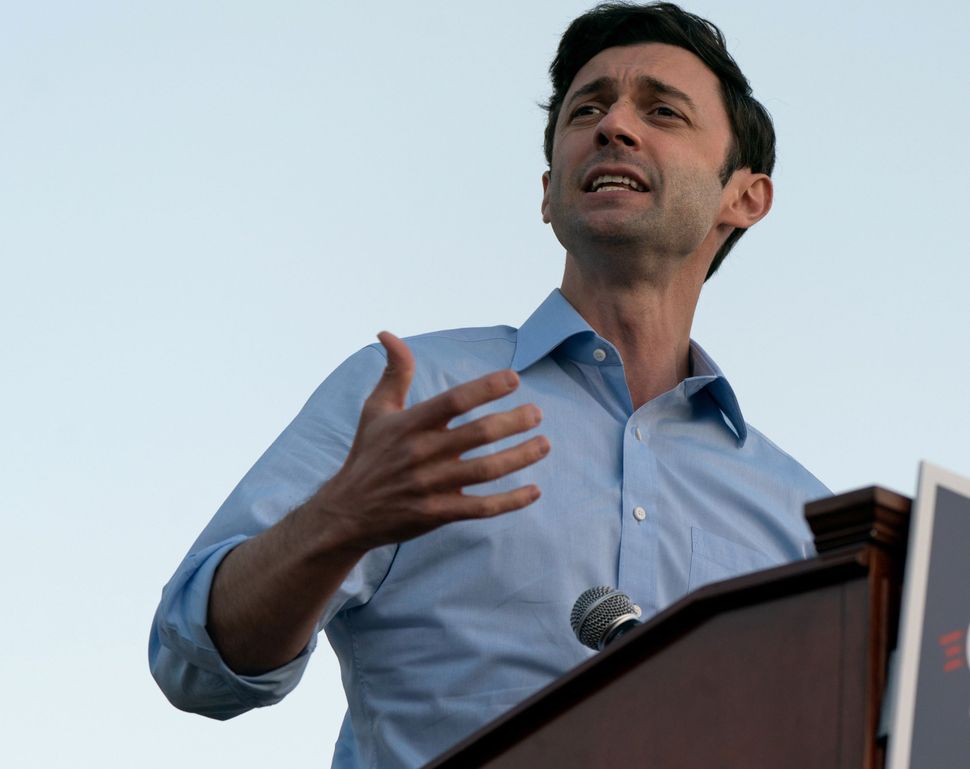 Jon Ossoff speaks at a campaign event on November 19, 2020 in Jonesboro, Georgia. By Elijah Nouvelage/Getty Images

Perdue saw Ossoff’s Jewishness as a liability. Ossoff’s supporters saw it as something to be celebrated. Something no one pointed out: Ossoff isn’t just Jewish, but a patrilineal Jew.

I grew up in rural Georgia. My peers didn’t care that my mother was Catholic when they asked me to accept Jesus Christ as my Lord and savior or told me Holocaust jokes. Ossoff is hated as any other Jew, and he is celebrated as any other Jew. It does not matter that he is Jewish through his father, not his mother.

I voted for Ossoff three times in the 2020 election cycle: in the primaries, the general election and Georgia’s historic twin runoffs. I voted for him because I agree with his politics, he’s pretty dreamy, and I thought Perdue manifested the worst aspects of Trumpism — including the bigotry apparent in his antisemitism-tinged attacks on Ossoff.

But I also voted for Ossoff because I saw myself represented in his Jewishness, and that representation mattered to me.

Jewish life in rural Georgia, as I experienced it, was nonexistent. There was a small Reform synagogue in the nearest city, but my father isn’t very religious, so we didn’t attend. We had no idea there were Jewish summer camps in the mountains north of Atlanta, so I went to a Christian summer camp because that’s where my friends went.

I dealt with antisemitism in middle and high school. And then, when I arrived at my liberal arts college, I was shocked to discover that some of my fellow Hillel members didn’t think I was actually Jewish — because my mother wasn’t.

My apparent non-Jewishness was news to me. Growing up with a Catholic mom and a Jewish dad just meant double the holidays and double the annoying questions from my peers. I had no concept of matriarchal Judaism.

In 2017, I went on the Jewish Federation of Greater Atlanta’s Community Birthright trip. A third of the participants — including my brother and myself — had non-Jewish mothers. I listened to my new friend Max as he talked about being called a “mutt” by other Jews growing up. At the end of the trip, Max and I celebrated our b’nai mitzvot with a dozen other participants.

The same year, Jon Ossoff launched his bid for Congress. His campaign made national headlines, and all anyone could talk about was the nice Jewish boy who might represent Georgia’s sixth district.

Ossoff was upfront about his heritage from the start of his campaign. In an interview with Moment Magazine, he said, “My father is the grandson of Jewish immigrants from Lithuania and Russia who arrived in the U.S. in the early 20th century, with nothing. My mother is an Australian immigrant, who is not Jewish, so prior to my bar mitzvah, I entered the mikvah to make it official. I was raised in a Jewish household, went to the Temple, which is a Reform synagogue here in Atlanta, and was bar mitzvah’d and shortly thereafter made my first trip to Israel.”

No one questioned the fact that Jon Ossoff was a Jew. But during a leadership development series sponsored by the Federation, I still found myself having to defend my place in Judaism. I kept telling the peers in my cohort that I didn’t have to convert to be fully Jewish. In a discussion on keeping kosher, someone asked how I was connected to Judaism if I didn’t follow halacha and my mother wasn’t a Jew.

I responded that my last name was enough for others to identify me as a Jew, so it was sufficient for me, too.

Ossoff will join the Senate not only as a patrilineal Jew, but also as the body’s youngest member and its first millennial. He represents the first generation of Jews born to interfaith marriages recognized by the Union for Reform Judaism.

It’s a prominent public worry of many Jews that children of interfaith marriages will likewise marry outside the religion, and Judaism will die out as more Jews assimilate and marry outside of the tribe.

But the opposite is happening.

Ossoff stands as proof that Jews do not need to inherit Judaism from their mother — or both parents — to choose to live Jewishly, marry Jewishly and serve to advance Jewish values. He is a needed champion for those of us who share his heritage. I’m a patrilineal Jew. I choose to live Jewishly, I want to marry Jewishly and I want to advance our values. My Jewishness is just as legitimate as my newest Senator’s.

Ossoff’s patrilineal Jewish heritage matters. His Jewishness is accepted at face value and is celebrated by Jews around the world. Mine should be, too.

Zoe Katz is a journalist and content creator from Athens, Ga. A recent graduate of Agnes Scott College, she most recently covered Georgia’s elections as an Election SOS fellow. Follow her on Twitter @zoejudithkatz and view her work at zoejudithkatz.com.