Who is Alisha Kramer? Meet the Jewish doctor married to Jon Ossoff 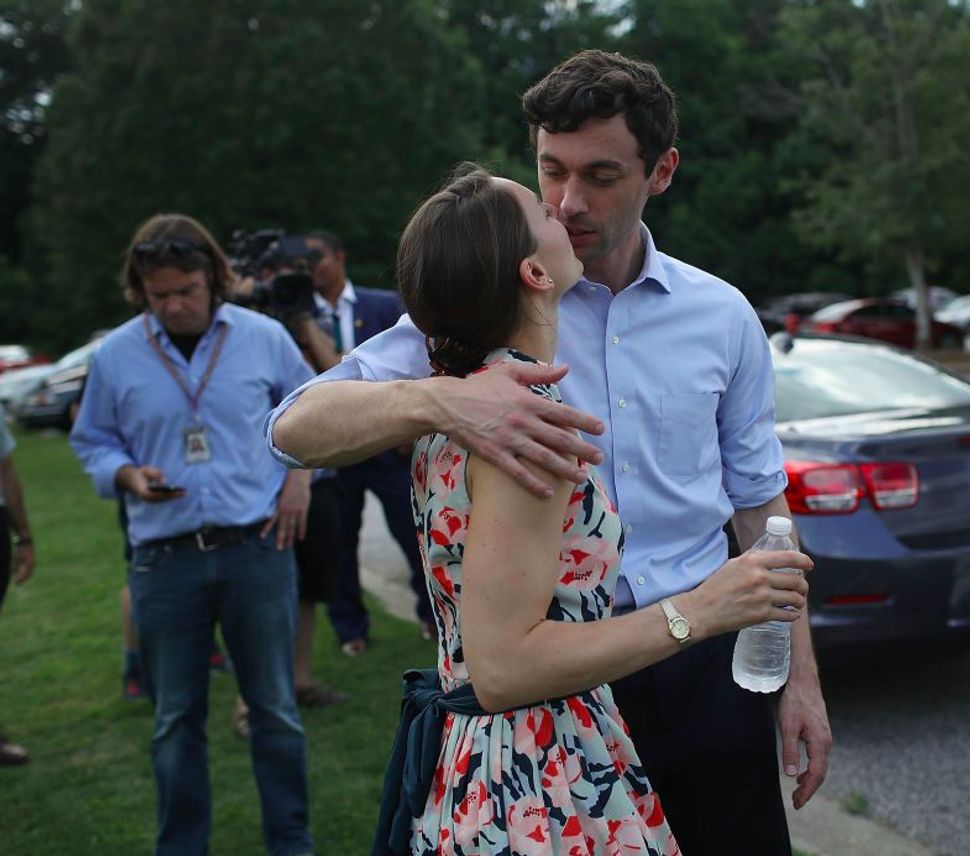 Ossoff and Kramer share a moment during a 2017 campaign event. Image by Getty

Jon Ossoff’s election to the United States Senate has already spawned several joking tweets about drastically raised expectations for Jewish children. After all, if a 33-year-old documentary filmmaker with virtually no political experience can win a paradigm-shifting election, why are the rest of us just sitting around watching “Bridgerton?”

As it turns out, Ossoff’s wife, Alisha Kramer, may be the real parent-pleaser.

She, after all, is the Jewish doctor in the family.

We may never know how Kramer feels about the teenagers relentlessly lusting after her husband on TikTok. But there’s plenty to learn about this newly-minted medical professional. Here’s your need-to-know rundown on Dr. Alisha Kramer:

Their romance is nothing new

It was a match made in high school — specifically, Paideia School in Atlanta, Georgia, which Ossoff and Kramer both attended. Since Kramer is three years younger than Ossoff, they most likely started dating when she was a freshman and he was a senior.

Like Ossoff, Kramer went to Georgetown, starting just a year before her boyfriend graduated and majoring in global health.

Did we mention she’s a doctor?

After two years working at a Washington, D.C. think tank, Kramer returned to her native Atlanta to start medical school at Emory University, where she’s currently an OB-GYN resident.

Even as a practicing doctor, she’s stayed active in the policy world. In 2019, Ossoff posted a picture of Kramer testifying before the Georgia State Senate in opposition to the state’s new restrictions on abortion.

“I think we can all agree that when any one of us go to our doctor we expect the privacy, respect and dignity of a confidential consultation,” Kramer said. “We do not expect politicians to presume to understand our medical needs better than we or our doctors do.”

During the campaign, in which health care and responses to the coronavirus pandemic have been topics of contention, she’s conducted online town halls alongside Ossoff — filming this one after finishing an overnight shift at the hospital.

Her husband loves kvelling over her career.

If, by now, you have failed to absorb the fact that Alisha Kramer is a doctor, Jon Ossoff is more than happy to remind you.

And he frequently talks up her work on the front lines of the coronavirus pandemic. “People always ask me how I’m doing,” he quipped during a Facebook livestream. “I’m like ‘I’m fine. Alisha is on her feet all night delivering babies.’”

They’ve also made significant choices around her career. In 2017, while Ossoff was contending for a seat in the House of Representatives, the couple lived not in Atlanta’s Sixth District, where he grew up and which he was running to represent. Instead, they lived in a different neighborhood from which Kramer could easily walk to medical school. The situation resulted in repeated attacks by Republican groups who used Ossoff’s living situation to portray him as a “carpetbagger.”

“It’s something I’ve been very transparent about,” Ossoff said at the time. “In fact, I’m proud to be supporting her career.”

We can only imagine how he’d respond if an opinion writer advised her to “drop the doc.”

Kramer and Ossoff’s long courtship has spawned some light teasing.

In 2017, when the couple had been dating for 12 years, CNN anchor Alisyn Camerota asked Ossoff a blunt question: “When are you going to marry her?”

Ossoff demurred, replying with (probably feigned) amusement that “I can reasonably say that’s more of a personal question.”

But Camerota might have been on to something: Ossoff ended up popping the question just a month later.

Not to mention online attacks.

In 2019, the National Republican Senatorial Committee created a misspelling-filled parody of Ossoff’s website that claimed he was “shamed into proposing” to Kramer.

They’re not the only ones who felt compelled to weigh in on the astonishing fact that the two dated for a long time. Rush Limbaugh hemmed and hawed over the situation in a 2017 broadcast before reluctantly concluding that “I don’t have a problem with it.”

On election night, she was at work.

While most of us spent Tuesday night basking in the dulcet tones of Steve Kornacki, Kramer was at the hospital, according to a Tweet from reporter Emily Murphy. She likely kept tabs on the results between patients. Because it’s 2021, and that’s what a political spouse does.

I’m told @ossoff is watching returns w/ his campaign team, but not his wife, Dr. Alisha Kramer. She is an OB-GYN and working an overnight shift, so she’ll have to get the news b/w patients. #gasen #gapol

Who is Alisha Kramer? Meet the Jewish doctor married to Jon Ossoff