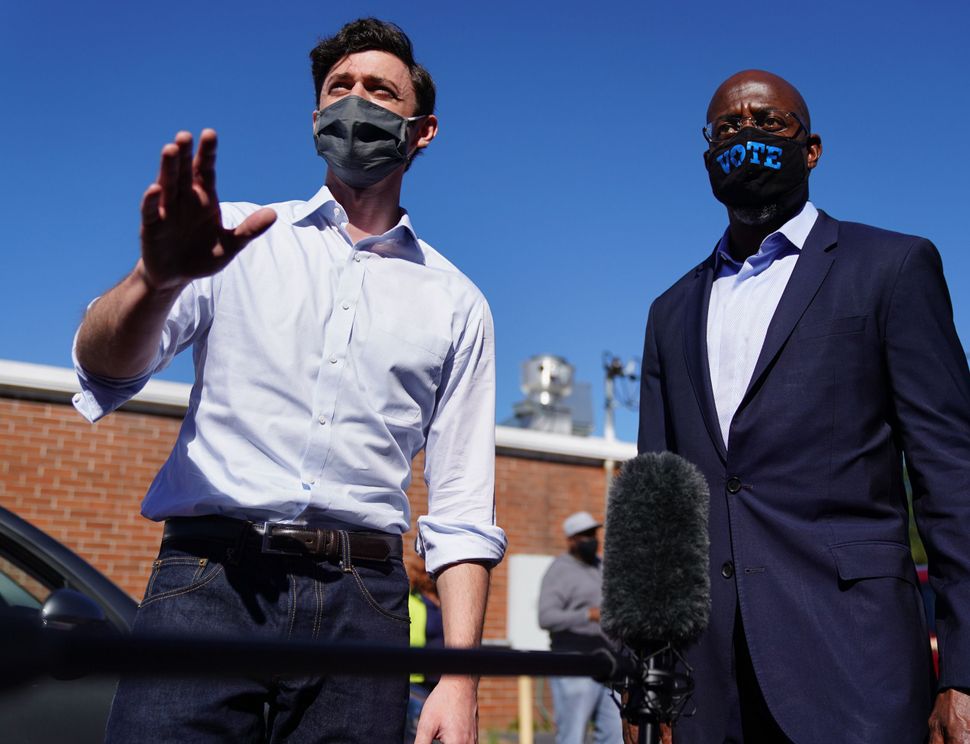 Jon Ossoff and Rev. Raphael Warnock hand out lawn signs at a campaign event on October 3, 2020 in Lithonia, Georgia. By Elijah Nouvelage/Getty Images

“It was good,” I told my mother. “But they threw pennies at my feet?”

I was 7 years old, and she had asked about my first day of school in Atlanta. It was 1987. I didn’t understand what being a Jew had to do with pennies, or why children would throw them at me.

That’s when I first began to hear the stories.

When my mother was 6 years old in late 1950s Savannah, she brought the mail to her mother one afternoon. It included a letter from the KKK, addressed to my grandparents. It listed the names and ages of my mother and her two older brothers.

It was the Klan’s way of letting them know that they knew.

At 12, my mother was chosen by her school principal to be the buddy to a new girl at school. This girl and her brother were the first two Black students brought to the school through the process of court-ordered integration. My mother was friendly, and didn’t think much about why she had been selected for this special role.

She returned to her locker at the end of the day to find it bashed in and vandalized with antisemitic slurs. It was the day she learned the word “kike.” When she was first called a “dirty Jew.” One slur, using the worst pejorative for Black people, accused her of being something like a race traitor.

And so it went, for me and my family, and for so many Jewish and Black people who grew up in the South.

We were banned from the same country clubs, hated by the same groups. But we didn’t bond only through our shared outsider status. Our two communities had a rich history of shared struggle and of partnership, although as time marched on much more of the brunt of that hatred and discrimination continued — and continues — to be shouldered by our Black brothers and sisters. Many Jews have, in recent decades, been given access to levels of privilege that remain closed to Black people. Now, many of us see it as our responsibility to repair an alliance that has become frayed at points, and fully torn at others.

Despite that complexity, the bond between our communities endures. It is in the iconic imagery of Rabbi Abraham Joshua Heschel crossing the Edmund Pettus Bridge in March 1965, arm-in-arm with Rev. Martin Luther King Jr. It is also in the mundane and sacred reality of my own life in the South. I have been to more Black funerals than Jewish ones, and feel as at home in Black churches as I do in my own synagogue.

As I watched Barack Obama eulogize the late Congressman John Lewis with my children in this past summer’s swelter, I remembered sweating in a Black mega church in Atlanta during a 2000 ceremony honoring another a late civil rights leader. I paid my respects as a part of the American Jewish Committee, where I worked for the legendary Sherry Frank as a part of what became the Atlanta Black/Jewish Coalition she founded with Lewis.

We stood shoulder to shoulder in that packed Church in the July heat and swayed as the gospel choir sang. I didn’t know the words, so I said kaddish — the Jewish prayer for mourners. Yitgadal veyitkadash shmay rabba. Magnified and sanctified be God’s name.

This week, as Rev. Raphael Warnock, a Black man, and Jon Ossoff, a Jew, were declared twin victors as Georgia’s next Senators, I felt such joy and triumph. It reminded me again of that day I said kaddish in church. It was a culminating moment in the coming-together of two communities in a shared vision and joint rebuke of hatred and division. The symmetry of these two men winning together at this time could not have touched me more.

Then, the same day their victories were affirmed, we witnessed the convulsive rage of the pro-Trump insurrection at the U.S. Capitol. A noose was erected on Capitol grounds. Rioters stormed the Capitol waving confederate flags. A man wore a sweatshirt that made a mockery of the horrors of Auschwitz.

How very like the history of those who have lived under the heel of oppression to eke out a win, only to be kicked again. But we get up. We reach for shoulders, for hands. For hope. In two weeks, these new Senators will come to this Capitol to lay their own hands on two versions of a Bible. Together, they will help to write the next chapter of our nation’s history.

_Jenna Ben-Yehuda is President and CEO of the Truman National Security Project and the Truman Center. _