Democrats swept Georgia, then a mob attacked the Capitol. Where do our politics turn now? 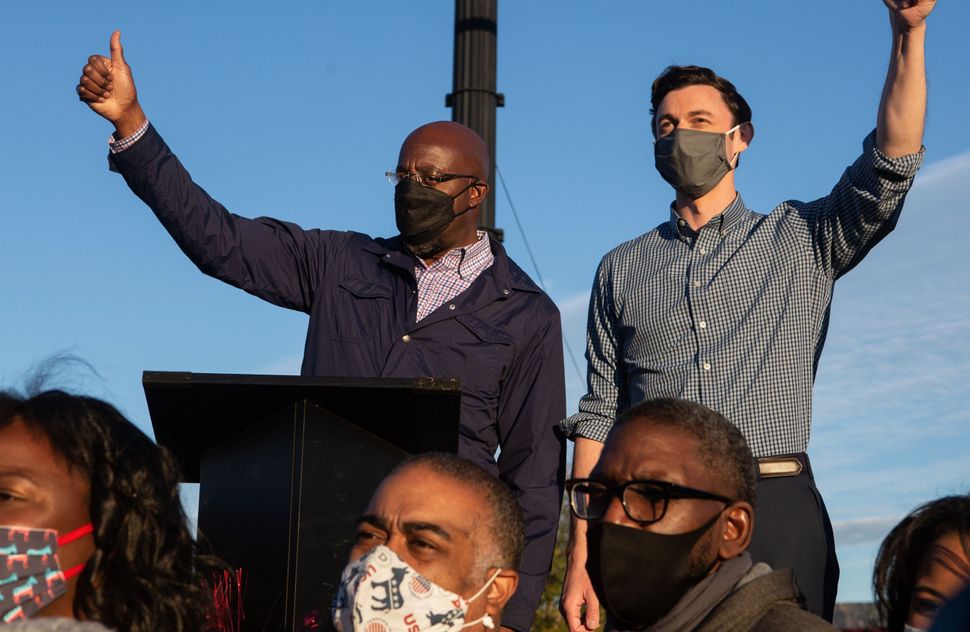 Jon Ossoff (R) and Rev. Raphael Warnock (L) of Georgia wave to supporters during a rally on November 15, 2020 in Marietta, Georgia By Jessica McGowan/Getty Images

If I told you 50 or even five years ago that Georgia’s two Senate seats would be held by a Jew and a Black man, you might have thought I was pitching a science fiction novel.

And if I would have told you at the start of last week that the President would incite a mob to attack the Capitol, you would have thought I was deep down the dystopian rabbit hole.

If President Trump represents our worst demons, the results in Georgia are the signatures of our better angels. The stage is set for a struggle for the future of our democracy.

Rev. Raphael Warnock and Jon Ossoff’s victories, achieved in the shadow of violence, are worth celebrating, regardless of party. They put the lie to the fact that American diversity is a dead letter. They refute the pessimists who insist that our politics is without possibility, and that the status quo will be a forever regime. Warnock will be one of only 11 black Senators ever to be elected to the Senate, and the first one from Georgia. It’s an eloquent and painful development, a reminder of the long history of prejudice and violence faced by Black people in states like Georgia, and a suggestion of hope that the future may be brighter.

Ossoff’s triumph, too, is backlit by a tragic backstory: the lynching of Leo Frank in Atlanta, a permanent stain on the tenure of Jews in America. The notion that a Jewish child of immigrants could represent Georgia and be one of a minyan of Jewish Senators is a testament to the miracle of this democracy. The fact that Warnock and Ossoff campaigned together, explicitly echoing the landmark partnership of Martin Luther King, Jr. and Abraham Joshua Heschel, is a historical echo that lands sweetly at a moment when examples of solidarity are difficult to find. The sordid reality that their opponents ran skin darkening and nose-lengthening campaigns of racist innuendo is all the more cause for celebration: Against the dirtiest tricks in the book, diversity prevailed.

Many have expressed trepidation about the connotations of a Democratic sweep of the Peach State. These objections usually take two forms. The first is concern over Warnock’s positions on Israel, in which he has historically mixed support for a two-state solution and opposition to BDS with strident criticism of Israel’s treatment of the Palestinians.

The second is unease over the prospect of handing Democrats unified control of government: in such a divided country, the thinking goes, gridlock might not be the worst thing.

These worries are not without merit. The drift of certain elements of the Democratic Party toward a strident and doctrinaire hostility to Israel is a matter of real concern, both in an immediate sense and because it reflects broader currents of hostility within the progressive left. A strident new strain of antipathy to Israel has already spilled out beyond the college quad, and efforts to prevent its spread must be priorities for everyone. At the same time, it is important to make distinctions between criticism and implacable opposition, and labeling everyone to the left of David Friedman as anti-Israel is counterproductive. The possibilities of liberal Zionism need to be preserved, even if they sometimes make us squirm.

The argument that a split government might temper our overheated political climate is one I was sympathetic to in the days after the presidential election, when it looked improbable that Democrats would capture the Senate. But Trump-led efforts to overturn the election have necessitated a change in thinking.

The MAGA riot meant to disrupt the Congressional certification of the vote can only be described as a seditious assault. It was the literalization of the attempted coup that has been underway for months.

The willingness of large and visible chunks of the Republican Party to go along with increasingly desperate and bizarre efforts to “find” enough votes for Trump to steal the election was a gut check moment for our democracy before the riot. It indicated that a critical mass of the GOP is too antagonistic to our democracy to be entrusted to govern it even in part. The outrageous efforts of Republicans like Senators Josh Hawley and Ted Cruz and Representative Kevin McCarthy to uphold Trump’s lie that the election was stolen confirmed that impression.

These final shambolic and unhinged days of the Trump Administration should serve as both a verdict on the last four years and a warning to the future: we all have too much to lose from complacently keeping such small men in such big seats of power.

Warnock and Ossoff notching victories in a historically solidly Republican state close on the heels of a Biden victory there suggests that there is a price to be paid for Trump’s madness. A 50-50 Senate will not reprise the legislative agenda of the French Revolution, but it will hopefully repudiate the politics of violence that are infecting our country. It offers the promise of a sorely needed return to the center, and of a comeback of a better kind of politics.

If ever there was a time we needed both, it’s in these early, shocking days of our second calendar year of COVID. The truth of who we are lies somewhere between a broken Capitol and the dawn of a new Georgia day.

Democrats swept Georgia, then a mob attacked the Capitol. Where do our politics turn now?