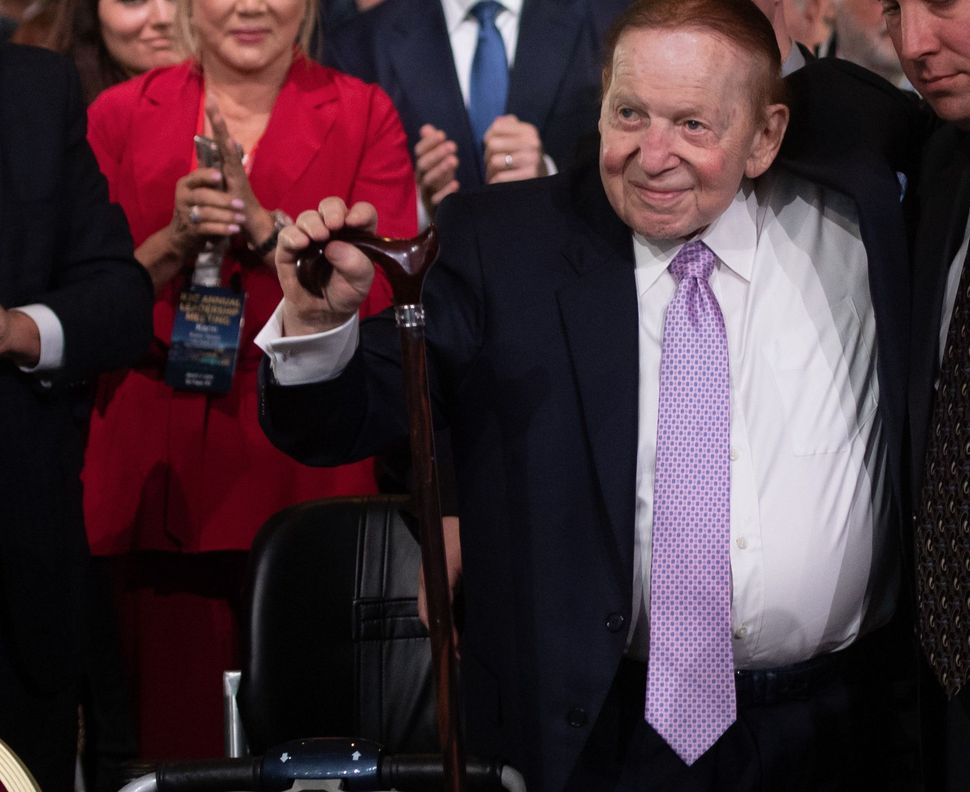 Sheldon Adelson, the self-made casino billionaire and leading political donor to right-wing political causes in both the United States and Israel, passed away this week at the age of 87.

Reactions to the loss of one of the leading Jewish political donors came swiftly, with political allies such as Donald Trump and Benjamin Netanyahu hailing Adelson as “an incredible champion of the Jewish people, the Jewish state and the alliance between Israel and America,” while some opponents on the Jewish left called for Adelson’s legacy to “be erased” or pointed to his “dangerous imprint on Israel’s media” due to his ownership of right-wing Israeli newspaper Israel Hayom.

Other Jewish groups, such as the American Jewish Committee and the Anti-Defamation League, elected to say nothing at all about Adelson, perhaps to avoid wading into potentially dangerous waters on one side or the other. In the wake of Adelson’s death, it seems, the Jewish world remained as divided over this influential Jewish donor as we were during his lifetime.

There is something symbolic about Adelson passing away in January 2021, a time when nearly all of the political causes in which he invested his time and money are increasingly embattled. Looking back, we may come to see his passing, just one week before Joe Biden is set to take office as the next president of the United States, as the end of an era of Jewish politics.

Take Adelson’s strong financial support for Donald Trump and the Republican Party: During the 2020 presidential election, Adelson invested a whopping $75 million into a super PAC to reelect President Trump, making him and his wife the single largest donors to Trump during this past election cycle.

And what did Adelson get for this tremendous investment? Trump lost to Biden by a sizeable margin, and is ending his term as president in ignominy and shame, with even former allies backing away from him in the wake of the mob riots on Capitol Hill. The House of Representatives is voting on his second impeachment as this column goes to press; previously sympathetic Republicans have warned the president not to run again in 2024; corporate America has finally distanced itself from him. Trump, whom Adelson supported more than any other president, may have finally exhausted the billionaire casino mogul’s political capital.

Or take Bibi Netanyahu, whose relationship with Adelson went well beyond political donations, and who referred to Adelson as “a wonderful friend.” Adelson was so close to the Israeli right-wing that he sat in the front row when the Trump administration inaugurated the new U.S. embassy in Jerusalem in May 2018.

And now? Netanyahu may not be departing from the Israeli political scene quite as imminently as Trump in the U.S., but the Israeli Prime Minister is facing his fourth election in the span of two years as his political coalition collapses around him, with political opponents calling for broad-based coalitions to take down his government and even former political allies saying they will no longer agree to be part of a government with him in charge.

Though it’s too soon to say for sure that Netanyahu’s time as Prime Minister is finished — he’s certainly managed to wriggle out of past situations that would have ended the careers of less powerful politicians — he’s facing unprecedented political peril. For the first time, polls show parties opposed to Netanyahu remaining as Prime Minister outperforming parties allied with Netanyahu. Adelson passed away as his big bet on Netanyahu seemed less sure than ever.

But the decline of Adelson’s favored projects that accompanied the decline of the man himself isn’t limited to the politicians to whom he gave his benediction.

Adelson found the Obama administration’s nuclear deal with Iran so objectionable that he actually suggested dropping a nuclear bomb on Iran to threaten the country away from acquiring nuclear weapons. If it were up to him, he said, the U.S. would say, “You want to be wiped out? Go ahead and take a tough position and continue with your nuclear development.” When President Trump withdrew the United States from his predecessor’s nuclear deal, Adelson’s strategy appeared to be vindicated.

But with Biden about to assume office as president, Adelson’s big bet against the Iran deal seems like less of a sure thing.

Biden has pledged to reenter the nuclear deal that his former boss negotiated within months of assuming office, declaring that “if Iran returns to strict compliance with the nuclear deal, the United States would rejoin the agreement as a starting point for follow-on negotiations.” Despite Adelson’s big bet on Trump, supporters of the Iranian nuclear deal — which American Jews actually support by larger margins than do non-Jewish Americans — may wind up getting the last laugh.

Then there’s Adelson’s strong opposition to the statewide legalization of marijuana across the United States, including extensive financial support to campaigns against legalization.

Within the last years of his life, the tide of American culture turned in the opposite direction. A record high of more than two-thirds of Americans support the legalization of marijuana, which is now fully legal in 15 states and the District of Columbia, with more states likely to legalize it in 2022. House Democrats have voted to legalize marijuana, and even as temperamentally moderate a politician as Biden now at least backs decriminalization, if not yet full legalization. In a political landscape such as this, it’s hard to see Adelson’s financial support for continued anti-drug laws as a lastingly effective use of his money.

Finally, in 2018, Sheldon Adelson made the biggest donation to Birthright Israel in the organization’s history, pledging $70 million to ensure that “it is the right from birth of all Jews to go to Israel and I don’t want any young Jewish person in the world say that he is too old or sick to visit Israel.” Yet despite that investment, Birthright is facing unprecedented crises, ranging from protests and walkouts to campaigns to boycott the trips entirely. Despite the Adelson money, the number of young Jews who want to go on Birthright trips has declined by as much as 50%.

Birthright trip providers see this sharp reduction in program participation as a direct result of political alienation between young American Jews and the state of Israel, who increasingly report that they “perceive the country’s policies as antithetical to their values.” No amount of Adelson money can shift this overall trend; his big bet on the Jewish future seems more disconnected than ever from the actual life experiences of young American Jews.

There’s something undeniably striking about Adelson passing when he did. After a single Trump administration term, when Adelson achieved his most substantial influence in the halls of power, he died with his political legacy in something close to tatters, and the causes he supported appearing less relevant than ever before.

Far be it from me, or any of us, to speak ill of the dead. But I will say this: If one believes that political donations alone are enough to shift the political landscape, the political trajectory of Sheldon Adelson appears to argue otherwise. In the end, all of his billions may wind up as just a lot of sound and fury, signifying nothing lasting.