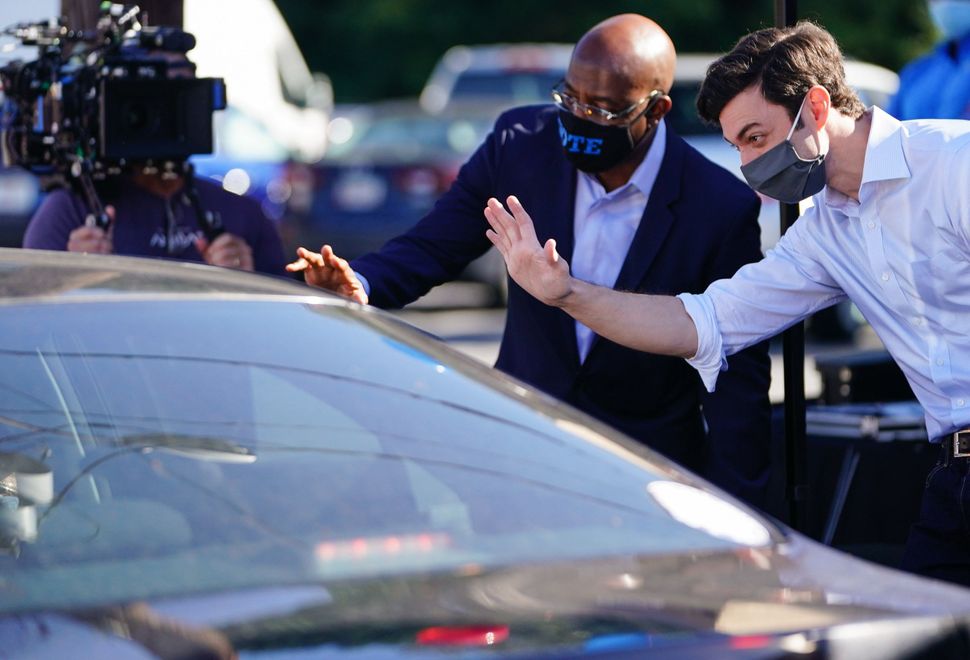 Jon Ossoff and Rev. Raphael Warnock at a campaign event on October 3, 2020 in Lithonia, Georgia. By Elijah Nouvelage/Getty Images

As the country reels from the assault on the Capitol, Georgia’s election of two Democratic senators — one Black, one Jewish — is creating waves of nostalgia for a more hopeful, optimistic time.

“I think Abraham Joshua Heschel, the rabbi who said, when he marched with Dr. King, he felt like his legs were praying, I think he and Dr. King are smiling in this moment,” Rev. Raphael Warnock, who will be Georgia’s first-ever Black senator, said after he and Jon Ossoff won their respective runoffs.

Together, Martin Luther King Jr. and Abraham Joshua Heschel produced a philosophy and poetic rhetoric of justice that brought Georgia’s Black and Jewish communities together in the early 1960s. But it’s the Irish-American politician Tip O’Neill who offers the single best lesson for Georgia, and for reviving the broken Black-Jewish alliance for the 21st century: All politics is local.

The Black-Jewish alliance in Georgia has historically been rooted as much in common interests as in common dreams. Both Black people and Jews faced long histories of discrimination, oppression and violence in Georgia, which informed the close involvement of some Georgia Jews in the Civil Rights Movement. One of Atlanta’s leading synagogues, The Temple, was bombed by white supremacists in 1958 after its rabbi joined King to oppose racist Jim Crow laws in the South.

Even when the alliance crumbled in the late 1960s, due in part to conflicting approaches to affirmative action, Israel, Louis Farrakhan and the presidential campaign of Jesse Jackson, Black people and Jews in Atlanta continued to work together on local causes and for local politicians. Atlanta’s Jews were financial supporters of the King Center, which commemorated King after his 1968 assassination. They voted for and donated to John Lewis as he rose to become one of the country’s leading members of Congress.

That familiarity, show of commitment and trust made a difference. When Warnock was accused during his recent campaign of making anti-Israel statements, Berg came to his defense, and a group of nearly 200 rabbis from Georgia and across the country signed a letter of support. Similarly, when it became clear how crucial Black voters would be in the run-off, Warnock embraced Ossoff, calling him his “brother from another mother.” Ossoff saw his share of Black voters grow from 87 percent in the November general election to a winning 92 percent in the runoff.

Black-Jewish cooperation has always fared best when it is grounded in politics. Even when the communities’ relationship has been at its most tense, Black politicians like Cong. Bill Gray of Philadelphia and Micky Leland of Texas found ways to keep the groups working together. In the late 1970s and 1980s, Gray led a group of minority politicians and Jewish liberals in Philadelphia who helped wrest power away from the racially polarized camp of conservative white mayor Frank Rizzo. He also helped found Operation Understanding, which sent groups of Jewish and Black teenagers on summer trips to Israel, West Africa and to Civil Rights sites in the American South to learn about each other’s histories. As chairman of the Congressional Black Caucus in the 1980s, Leland was an important bridge between Black lawmakers and Jews, a strong supporter of Israel and a pragmatist who welcomed the support of Jews for socially progressive legislation.

More recently, President Barack Obama, mentored by many Jewish advisors and supporters in Chicago, resolidified the Black-Jewish coalition in the Democratic party — and hosted the first Passover seder in the White House.

But it would be a mistake for Jews especially to view the Georgia results as a return to the spirit and political dynamics of the Civil Rights Movement. Nostalgia is too tempting, and it ignores the new American political reality.

Jews, especially those of us who are white, need to acknowledge how much has changed for us in the past 50 years, and how our own success in America and the benefits of race have fueled, intentionally or not, our participation in white privilege and racism. And Black people must consider if, in the pursuit of coalitions, it is possible to disentangle attacks on Israel and inflammatory rhetoric from the broader agenda of Black Lives Matter. Tough conversations lie ahead.

Black people and Jews do not live in a political vacuum. The two groups originally came together, in Georgia and elsewhere, out of a shared fear of racism and antisemitism. But fear has been far from the only force behind the alliance; together, we thrived and even triumphed under the politics advanced by FDR’s New Deal, LBJ’s Great Society and Barack Obama’s unifying message. President-elect Biden similarly promises a new era of healing and compromise.

In order to capitalize on that promise, both Black people and Jews must look to the message of Warnock and Ossoff’s victories in Georgia. Resist hashtag activism. Look instead for local issues — education, policing, housing, voter registration — that can bring Black people and Jews together and move the country forward. Like all of humanity, we “are caught in an inescapable network of mutuality, tied in a single garment of destiny,” Martin Luther King wrote. “Whatever affects one directly, affects all indirectly.”

Embracing that common destiny is easier when Black people and Jews know each other, when they work together on common causes, when they embrace the realities and give-and take of politics. If it can happen in Georgia, it can happen anywhere.

Jonathan Kaufman is the author of “Broken Alliance: The Turbulent Times Between Black people and Jews in America,” which won the National Jewish Book Award. He is the author most recently of “The Last Kings of Shanghai: The Rival Jewish Dynasties That Helped Create Modern China.” He is Professor and Director of the School of Journalism at Northeastern University