Traumatized by Capitol riot and awaiting inauguration, Jews in D.C. are terrified 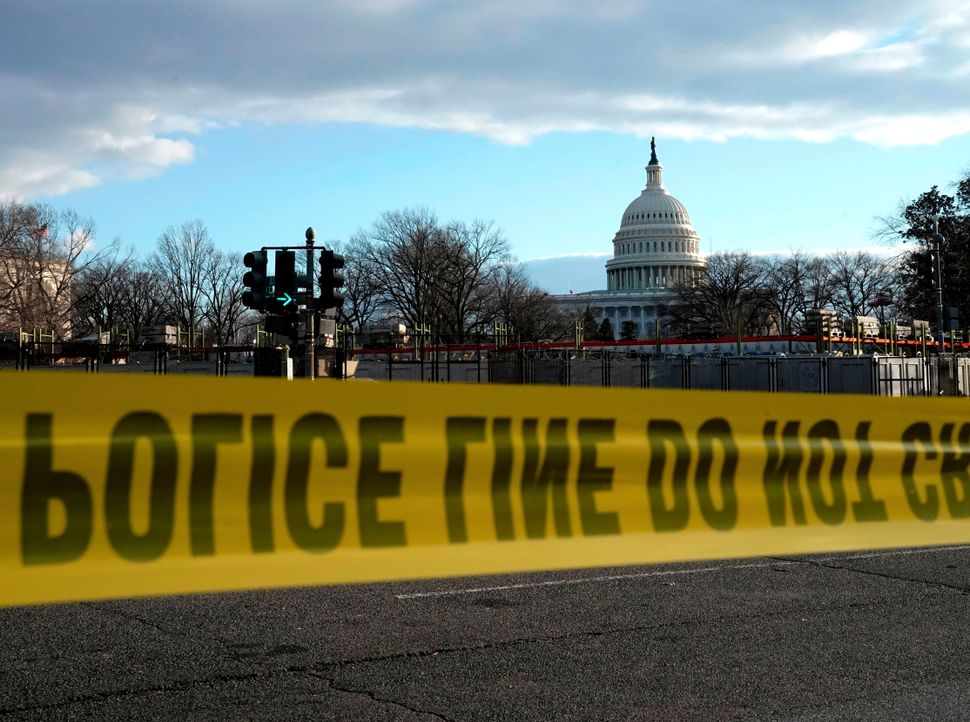 Police tape outside the US Capitol as is prepared for the inauguration ceremonies for President-elect Joe Biden and Vice President-elect Kamala Harris on January 18, 2021. By TIMOTHY A. CLARY/Getty Images

The third-largest Jewish community in America is living in imminent danger of domestic terrorism.

Washington, D.C., the city I call home, is in lockdown: a state of emergency has been declared in advance of President-elect Joe Biden’s Wednesday inauguration, and over 25,000 troops have moved in. Our city has turned into a fortress in order to protect the transition of power from President Trump to Biden from any attack building on the deadly Capitol riot two weeks ago.

I hear helicopters and sirens constantly. For the third time this year, my daughter’s Jewish school has been closed because extremists and neo-Nazis plan to march in support of Trump. My whole family is vulnerable, right now, as Jews; my Black and Jewish husband and daughter doubly so. The psychological toll has been heavy. Sitting at the playground with my dear friend Tara Leystra Ackerman, watching our very young children play, she expressed exactly what I was thinking: “I’ve been feeling overwhelmed, anxious, sad, and TIRED.”

We are not alone. The Washington Jewish community is living with tremendous fear right now. But we are also living with resilience.

I put a simple question to my community: How are you feeling and how are you coping as a Jew in D.C. right now? People answered in their professional capacity, but also as moms, as students, as synagogue members and community leaders. The message: We are scared and angry, and also resolute and full of hope, living through this moment in American history. And this is how some of us are approaching the anxiety caused by this pivotal week, and reflecting on the fallout from the Capitol riot that started this new era of fear.

“I’ve lived in several cities before, in the United States and Europe. This is the first time I’ve felt scared to go outside. With the president’s support, neo-Nazis and white supremacists stormed the Capitol — and they’re coming back this week.

“I’m a white woman, and that identity gives me a great deal of privilege. But I’ve also been told, all my life, that I “look Jewish.” It’s an outdated phrase, given our racial and ethnic diversity — but with insurrectionists obsessed with eugenics and phrenology, “Mein Kampf” and the “Protocols,” it matters. A stranger could glance at my hair and face and guess, correctly, that I’m a Jewish person.

“I’m lucky to have a great support network, a hard-working therapist, and most of all, a safe place to live far from the Capitol. I know that the D.C. government is doing all they can to protect the city. Still, I plan to stay inside Jan. 20, and probably the days before and after as well. I don’t want to test how Jewish I look when the answer could be deadly.”

“I was named after Manya Slutsker, a 12-year-old girl who was buried alive while visiting her grandmother in modern-day Ukraine. She was my great aunt. I live on U Street. When I went to Walgreens on January 5th, there was a man with a Trump flag, wearing a black shirt with yellow letters that said 6MNE.

“I’m a first-generation American Jew on my dad’s side; my dad came here in 1979. He fled persecution. Words cannot express the pain and anxiety I felt seeing a neo-Nazi in my neighborhood. My neighbors and I are not going out alone at night, we are staying in pairs.

“My family didn’t flee persecution in Russia only for me to come face to face with Nazis in my neighborhood.

“It’s just so shocking to see a place that is so holy to our democracy be desecrated like that. Imagine intruders coming into a shul and vandalizing it — going up to the bimah, throwing the Torahs. Watching terrorists siege Pelosi’s lectern felt like watching an intruder siege a bimah with no regard for the holy space we created there.”

“I’m terrified. My Jewish identity means so much to me and it hurts beyond words to see this. To see insurrectionists wearing “Camp Auschwitz” sweatshirts advertising the location and method of my family’s murder is horrifying. It keeps me up at night. My grandmother is a Holocaust survivor and it breaks my heart knowing she has to read about this.

“There is a direct correlation between white supremacists shouting “Jews will not replace us” in Charlottesville in 2017, Proud Boys wearing “6MWE” shirts and the atrocious attacks we saw in Poway and Pittsburgh. (“6MWE” is shorthand for “6 million wasn’t enough,” referencing the death toll of the Holocaust). I hope allies to the Jewish community continue to support our voices. I hope new allies choose to support us.

“I’m trying to focus on school but it feels impossible. Young people and students are particularly impacted by this: events like these are fundamentally impacting how we’re growing up. How am I supposed to do math when there are literal Nazis outside? We’re scared. We need mental health support. We need resources to combat this. We need understanding from our teachers. We need change.

“I’m trying to take care of myself in anticipation of this upcoming week. Journaling, talking it through with friends, unplugging and just feeling my emotions are helping. Organizing against antisemitism, spending time with my Jewish community on campus and getting loud to fight this is getting me through this week. I’m also thinking of the Yiddish saying, ‘Mir veln zey iberlebn’ — ‘we will outlive them.’ We need to take care of our mental health. It’s okay to take time to reflect. We have a long fight ahead of us.”

“Last week, my daughter asked me if we should take down our mezuzah from our door and our Black Lives Matter sign from our window. How am I coping? By making a bigger sign.

“I am proud to be a Jew, and I believe in American potential. We can and will build structures that acknowledge the privilege and abundance that comes from living in a multi-racial and multi-ethnic democracy, systems that fight racism and bigotry as foundational principles. What happened last week has always been part of who we are as a country, and it was disgusting.

“But what happens next week or the week after has the potential to be radically different. We — my daughter, me, you — can make that change happen.”

“Around the country, people are struggling to wrap their heads around the seditious mob they saw last week. In D.C. many, and especially those who work on Capitol Hill, experience a different level of struggle — they continue to physically fear for their lives. I lived in Israel during a war in Gaza and I saw the trauma that some experienced while under attack. I never imagined I’d experience something like that here.

“The lockdown of downtown, constant helicopters overhead, sirens from the streets and a green zone established just a few miles away make the leafy street of my Northwest D.C. apartment building feel closer to a war zone than the vibrant, historic District I’ve come to love. And this won’t just all go away after January 20. The mental health implications and danger of further attack will remain, most prominently for the heroic members of the Congressional community: Members, staff, press, and more. Let us pray for peace and quiet while working to forge a better America for all of us.”

“At this very moment, D.C. is likely one of the safest places in the country — for white people. For people of color, and especially as a Jew of Color, safety is relative. D.C. is full of National Guard troops, with an increased police presence and countless Secret Service agents. Major arteries into the city are being cut off, making it impossible for people, specifically across the river, to access grocery stores and hospitals, creating deeper disparities in a city where life expectancy is directly correlated with your ZIP code. Security and safety for some doesn’t always translate into security and safety for our most marginalized communities; intent versus impact is extremely relevant.”

“As the granddaughter of Holocaust survivors, I grew up hearing that I always had to be ready-to-go — suitcase and cash in hand — in case the world went mad again. A few years ago, this evolved to an actual bar of solid gold given to me with strict instructions — only use in dire necessity. I’ve thought about selling the gold many times, but over the past few months, I’ve found comfort in its possession. Living in the heart of downtown D.C., the tropes of hatred and bigotry are all too familiar to my family.”

Carly Pildis is the director of grassroots organizing at the Jewish Democratic Council of America. She also writes a weekly food column in the Forward, #tweetyourshabbat. Follow her on Twitter @CarlyPilids

Traumatized by Capitol riot and awaiting inauguration, Jews in D.C. are terrified