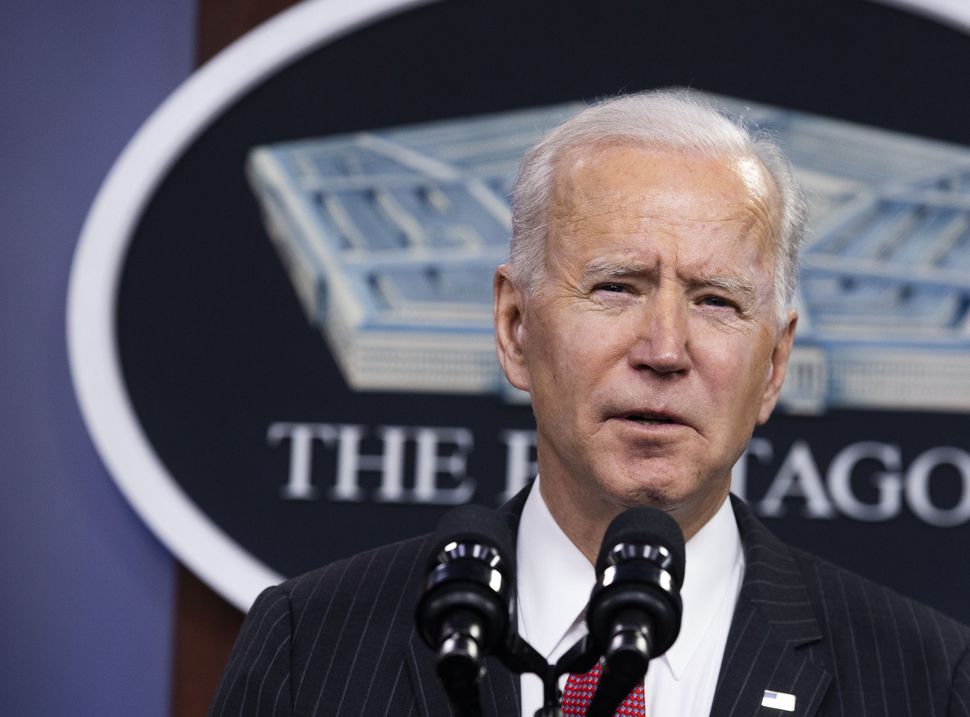 Of the many Democratic candidates who sought their party’s nomination for president in 2020, Joe Biden was perhaps the one who least worried pro-Israel stalwarts.

Aside from his clash with Israeli Prime Minister Menachem Begin, accounts of which are likely embellished, Biden’s long political record is one of friendship and understanding with the Jewish state. Anyone who has heard him speak in front of a Jewish audience more than once can likely recite from memory his oft-told story of meeting Golda Meir when he was a freshman U.S. Senator.

Even his association with the presidency of Barack Obama, hardly a favorite of Israel’s adamant supporters, did not dim his image as pro-Israel. For the eight years of the Obama administration, Biden was seen as a friend to whom Israel and its supporters could appeal when they found themselves at odds with other administration officials. In last year’s race, opponents of Israel’s half-century occupation of Palestinian territory like Peter Beinart warned of “Joe Biden’s alarming record on Israel.” The expectation was that a Biden administration would represent a restoration of the pre-Obama Democratic consensus on Israel.

These people are all highly qualified to serve in their roles. Many of them are not particularly known for their background on Israel and the Israeli-Palestinian conflict. And they are largely not expected to change the general policy direction of the administration, which is moderate and generally attentive to Israel’s concerns.

But by including them in his administration, Biden, an establishment figure par excellence, has sent an important signal to younger and more progressive generations of Democratic policy aides and advisors: Don’t be afraid that good faith advocacy for justice and human rights will be seen as a professional liability down the line.

The appointment that has triggered the most acrimony so far is that of Robert Malley as the administration’s envoy for Iran. Malley, a former official in the Clinton and Obama administrations who recently stepped down as chief executive of the International Crisis Group, is viewed by Iran hawks in the U.S. and Israel as being too willing to compromise with the clerical regime in Tehran.

But a full seven years before the Iran nuclear agreement was signed, when the bombastic tenure of Mahmoud Ahmadenijad seemed to rule out the possibility of any accord, Malley was already a subject of controversy for Barack Obama’s presidential campaign. The proximate cause of that furor: a meeting Malley had held with Hamas, which had recently won a parliamentary election in the Palestinian territories. (Malley held this meeting in his professional capacity as Middle East director at Crisis Group, which he worked for before the Obama Administration as well as after.)

Then as now, the real problem was Malley’s failure to stay within the bounds of stultifying Washington catechisms about the Israeli-Palestinian conflict.

Conservatives and other critics had viewed him with suspicion since he tried to complicate the simplistic black-and-white narrative of Israeli generosity and Palestinian rejectionism that emerged from the failed Camp David negotiations in 2000. Malley’s willingness to co-write an account of the talks with a prominent Palestinian figure, Hussein Agha, particularly irked those wishing to marginalize Palestinian voices in the debate.

Little of this may seem out of the ordinary now. But as the Second Intifada followed the Camp David talks, nuanced understandings of the Palestinian perspective were not much appreciated in Washington at the start of the millennium. Even now, over 20 years later, that episode is cited as some sort of charge against Malley’s integrity.

Though ardently pro-Israel in his worldview and his choice of most senior officials, President Biden has also been keen to include Palestinian voices in his administration and has rejected attempts to have their reported statements on the conflict be used against them.

When he picked the Palestinian-America Reema Dodin, a highly respected former aide to Senator Dick Durbin, to be Deputy White House Legislative Director, she was targeted for her pro-Palestinian activism and alleged statements as a college student at UC Berkeley in 2002, including her reported statement that “suicide bombers were the last resort of a desperate people.” To paint her in a nefarious light, Dodin’s critics intentionally blurred the line between an explanation — which that quote offered — and a justification.

In response, the Biden team issued a statement defending Dodin and citing her early activism as the “driving force” for her career.

Shortly after the inauguration, Biden’s administration announced that Maher Bitar would serve as senior director for intelligence on the National Security Council. While a student at Georgetown University in the mid-2000s, Bitar was an active member of Students for Justice in Palestine, through which he helped organize several Palestinian solidarity events that drew criticism from Jewish organizations for what they deemed harsh anti-Israel rhetoric.

Following his appointment, Bitar immediately became the subject of hyperbolic attacks from the right that focused not only on his time in school but also sought to discredit him for working on behalf of Palestinian refugees at UNRWA. Failing to find any extreme positions Bitar himself took, his detractors have been forced to rely almost entirely on asserting guilt by association. For example, a column by the conservative journalist Daniel Greenfield suggested multiple times that Bitar has sought Israel’s elimination, despite there being no evidence he has ever expressed such a view.

As with Dodin, the new White House dismissed those claims for the prejudiced smears they were. By the time the same kind of ugly attacks came for Hady Amr, a Brookings Institution scholar named to a senior State Department position on Israeli-Palestinian affairs, it was clear that the Biden administration would stand by its appointments.

Still, it appears Biden’s critics will stage at least one more attempt to railroad an aspiring public servant over his alleged anti-Israel history.

Last week, reports surfaced that Matt Duss, a senior advisor to Senator Bernie Sanders, would be named to an unspecified role at the State Department. Duss, a former fellow at the Center for American Progress, has long criticized Israeli policy in the occupied territories. Republicans are now exaggerating and twisting those criticisms, including by falsely accusing Duss of supporting the Boycott, Divestment and Sanctions movement against Israel. While not a supporter of BDS himself, Duss has often defended Palestinians supportive of the movement, rightly insisting that they are engaging in protected free speech.

Not one of these distinguished and qualified individuals are Israel-haters, as their right-wing critics allege. Neither are they likely to push the administration to be much more sympathetic to the Palestinians than the Obama White House was. But their presence in President Biden’s administration is nevertheless significant.

In selecting and defending its staffing choices so far, the administration has demonstrated a laudable commitment to Biden’s promise to serve as a bridge to the next generation of Democrats. It sends a reassuring signal to progressives in the Democratic Party that Biden is looking to integrate to their perspectives on foreign policy. Fears — or hopes — that this administration would marginalize critics of Israeli policy have turned out to be excessively inflated.