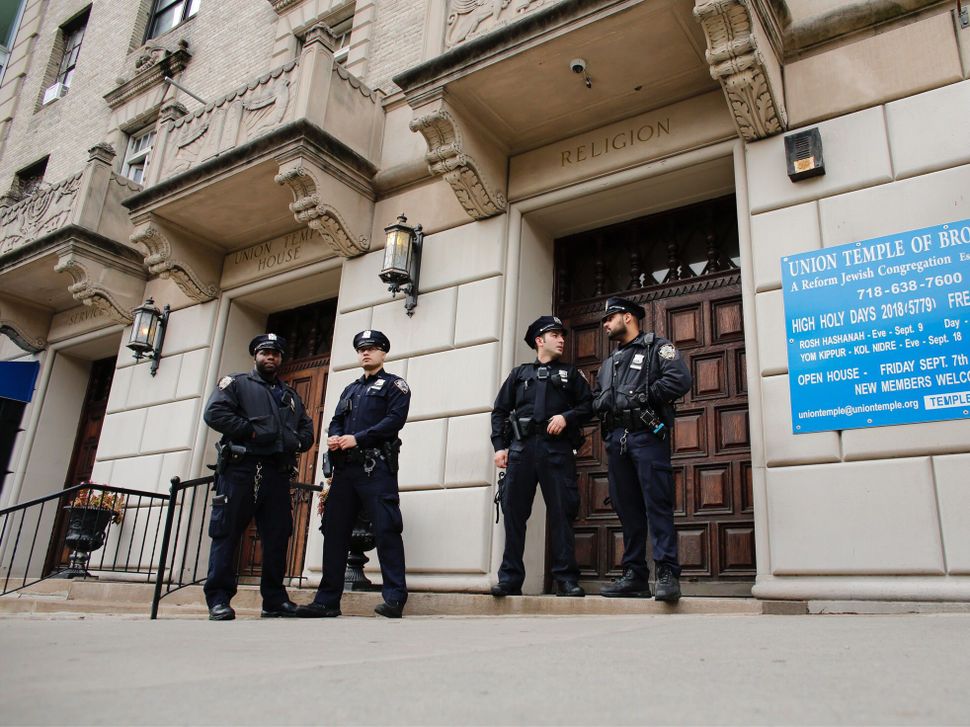 NYPD officers stand guard at the door of the Union Temple of Brooklyn on November 2, 2018 in New York City. By KENA BETANCUR/Getty Images

Over the last several years, we have seen near-historic increases in antisemitic incidents and assaults as we have watched a surge in online hate from more vocal — and violent — extremist groups.

From online hate to cyber-attacks to the Capitol insurrection on Jan. 6, the danger is real. To protect America’s Jewish community, it is critical that organizations committed to addressing hate, extremism, antisemitism, safety and security work together.

Over the last several years ADL, a global leader in fighting antisemitism and hatred in all forms, and the Secure Community Network (SCN), the official safety and security organization of the Jewish community, which works under the auspices of The Jewish Federations of North America and the Conference of Presidents of Major American Jewish Organizations, have worked closely to coordinate with one another, as well as with Jewish communities and law enforcement.

Following the 2017 white supremacist rally in Charlottesville, we began to coordinate even more closely to fight the dangerous rise in threats against the Jewish community.

In the wake of the attack on the U.S. Capitol, which included antisemitic elements — not to mention the violent antisemitic attacks in recent years on Jewish communal institutions in Pittsburgh, Poway, Jersey City and Monsey — we are once again taking our partnership to a new level, and signing a formal partnership agreement for the first time.

The protection of the Jewish community and our democracy requires it.

In September, the Department of Homeland Security (DHS) released a threat assessment noting that white supremacists “remain the most persistent and lethal threat in the homeland.” The assessment made specific reference to attacks on the Jewish community. Only months later, DHS publicly recognized that the U.S. faced a growing threat from “violent domestic extremists” emboldened by the Capitol attack.

Our cooperation will allow our respective strengths to efficiently address the dramatic rise in hate, antisemitism, extremism and violence. Here are some of the key aims that we hope to achieve through the new iteration of our longstanding partnership.

Data, intelligence and information sharing are vital to community security. Last year, the American Jewish community experienced the highest level of antisemitic incidents since ADL began collecting such data in the early 1970s. We are in an age in which criminal elements often move faster than intelligence, and it is critically important to ensure intelligence efforts are as efficient as possible. Our organizations have strengthened our intelligence centers to respond to this rise.

We have begun to collaborate on all three phases of the intelligence cycle: collection, analysis and dissemination. Working together, we can better gather the latest information, parse it to discern trends, identify concerning groups and individuals, determine how serious a threat may be and share information with the community, allowing people to be better empowered and protected.

But we won’t stop with sharing our findings with the Jewish community. ADL and SCN will also work together to ensure that vital information, research and data developed by ADL related to extremist threats are disseminated broadly to security professionals, law enforcement, federal and state legislators, community members and others.

The Jewish community is more secure when our congregants are well-informed about risks and our facilities are secure. It is a core principle of SCN to provide congregations with expert security planning, preparedness, risk assessment and trainings on everything from active security threats to potential acts in the planning phase. The scope of these operational security initiatives will now expand in coordination with ADL, and incorporate training offered by ADL related to antisemitism and hate.

The threats that face the Jewish community today are diverse and expanding. In 2018 alone there were an estimated 4.2 million antisemitic tweets shared on Twitter. 2019 was the deadliest year on record for anti-Jewish hate crimes. In the beginning of this year, we saw a Capitol rioter proudly wearing a shirt that read “Camp Auschwitz”. Our organizations’ close coordination will enhance and improve our community’s efforts to mitigate these many dangers. We must ensure that the Jewish community is appropriately prepared and resourced to combat these threats.