Controversies about Jews and white supremacy are erasing Jews of color 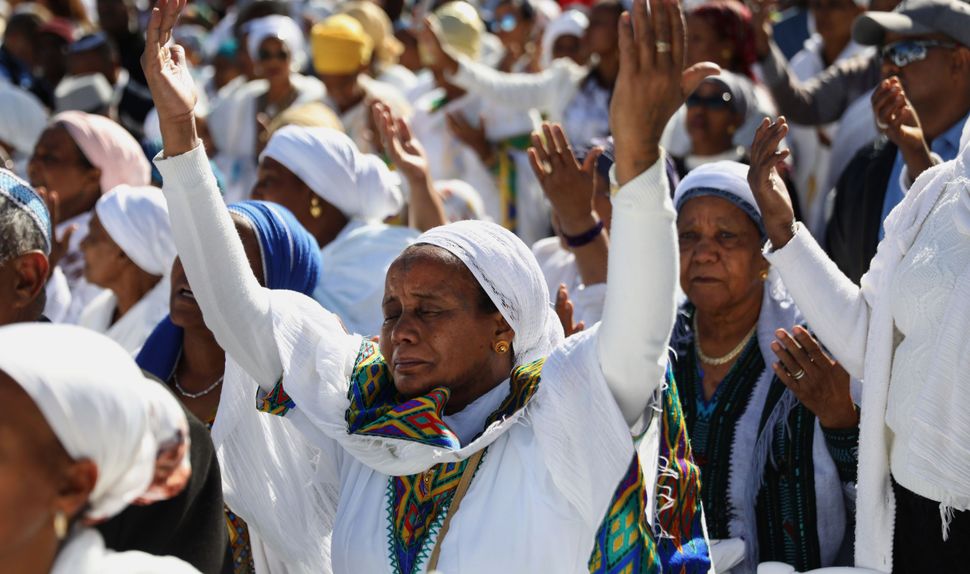 Israeli women from the Ethiopian Jewish community pray during the Sigd holiday marking the desire to ‘return to Jerusalem’, as they celebrate from a hilltop in the holy city overlooking the Temple Mount, on November 27, 2019. By GALI TIBBON/Getty Images

In December, the Forward published an article about my most recent book, “Black Power, Jewish Politics,” with a headline that mentioned Jews in connection with white supremacy.

With those two words — “white supremacy” — the internet lit up. The article received over 100 critical comments. The Forward published an op-ed pushing back on the idea that Jews might have anything to do with white supremacy. In open letters, readers with a multitude of viewpoints debated the appropriateness of applying the term to Jews and to American Jewish history.

The response was instructive, not least because, in my mind, the bulk of it was focused on the wrong term.

The better one? “Erasure.”

That term refers to the broad exclusion, in the American Jewish narrative, of Jews of color. It’s something I’m guilty of in my book, which did not mention Black Jews, a mistake common in many public Jewish conversations. I was struck by the two very different conversations unfolding in response to the article: The dominant one, about the anguish many Jews feel about being associated with white supremacy, and the quieter but more powerful one, about how that focus on Jews and whiteness further alienates Jews of color.

The lesson was clear. When we erase Jews of color and focus exclusively on white Jews — especially while having conversations about American racism — we fail this moment of national racial reckoning.

The issue at hand is one, effectively, of how we understand history.

To many Jews, the idea that we might benefit from white supremacy threatens our collective historical memory. As a culture, particularly among white Ashkenazi Jews, we’ve internalized a narrative of our own exceptionalism, refusing to acknowledge that the whiteness conferred upon us has given us opportunities others lack. Instead, we’ve credited our rapid social mobility to a Jewish cultural affinity for education and hard work.

This narrative erases Jews of color, conveniently ignoring that the rapid social rise of Jews in American society has been restricted to white Jews. As Ilana Kaufman, founder and executive director of the Jews of Color Initiative, teaches, historians must consider racial status as a central feature in their understanding of the past. To what extent did the privileged racial status of most American Jews inform their historical experience, even as antisemitism sometimes played a limiting role?

If Jewish whiteness opened doors to greater opportunities, that factor must be included as an important causal factor in American Jewish social mobility. When we work to counteract the erasure of Jews of color in our study of American Jewish history, we end up learning the stories of Jews of color that have largely been omitted from our shared narrative. We better understand their paths, and we better understand the history of white Jews whose American journey followed a path of racial privilege.

Take, for example, Charles McDew, a Black Jewish man who served as the second leader of the Student Non-Violent Coordinating Committee (SNCC), a leading grassroots civil rights organization. Succeeding Marion Barry in 1961 before handing over the SNCC reins to John Lewis in 1963, McDew has by every measure earned a place in our collective memory. But while the name of, say, the white Jewish civil rights activist Rabbi Abraham Joshua Heschel is mentioned hundreds of times on the Forward’s website, before this op-ed, McDew’s had never appeared even once.

Mr. Charles McDew visits the SC Statehouse for the first time since the Confederate Flag removal, a flag put up soon after a 1961 march during which he was arrested. #ourstorymatters pic.twitter.com/I3rEPfXmvs

This kind of exclusion prevents us from fully understanding the role of Black Jews in American history. And it poses a threat to our communal well being.

To contend with the idea of erasure means accepting the premise that many Jews benefit from white supremacy — yes, even as they remain targeted by white supremacists. And as long as we do not meaningfully grapple with the pervasive erasure of Jews of color in our culture, we will miss the perspectives and contributions of diverse American Jews who choose to express their Jewish identities outside of white normative Jewish spaces — perspectives like that of McDew, from whose life and teachings we could all learn.

Our Jewish organizations will remain ensconced in a system of racial privilege that alienates a growing number of Jews, divides our community and undermines Jewish values.

It’s no accident that the term “white supremacy” rather than “erasure” governed the debate over that December article. Erasing Jews of color, as that debate did, is itself an act of white supremacy, a way in which white Jews continue to maintain power and control over communal life.

By treating a vital and integral part of our Jewish community as invisible, we act as racists advancing the very system of white supremacy we spend so much time attempting to discount.

Marc Dollinger is the professor of Jewish Studies at San Francisco State University.

Controversies about Jews and white supremacy are erasing Jews of color