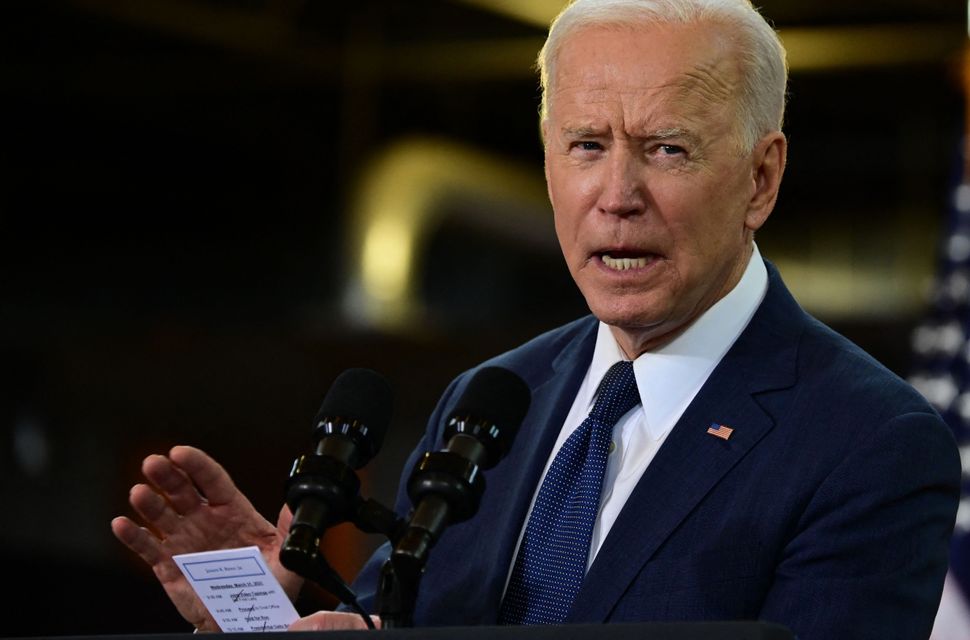 Standing at a podium at a carpenter training facility in western Pennsylvania, Joe Biden on Wednesday announced the most ambitious reimagining of the federal government since the New Deal.

The American Jobs Plan, which comes on the heels of the $1.9 trillion American Rescue Plan that Biden signed into law in March, calls for an initial $2 trillion to rebuild America’s physical and digital infrastructure and an estimated further $2 trillion in aid for the poor, paid leave for workers and other human investment.

To be paid for largely by raising tax rates for corporations, the policies point to a president in a hurry to do big things. And they suggest that an administration many imagined would likely bend toward bland bipartisanship instead has its eye on the history books.

After four years of a reality TV president, Biden is trying to change something like the reality of life in America.

Even those skeptical of government action, or made queasy by the sums being contemplated, should support this effort, which aims to write the rough draft of the post-COVID American landscape.

Timing is everything. As Ecclesiastes reminds us, “to everything there is a season… there is a time to tear down, and a time to build up.” We have lived through too much tearing down: of norms, institutions, entire ways of life, one another. Americans desperately need to believe that we can put things back to rights and fix what is broken. That project is bigger than any bridge, but solving it might be just the bridge we need to a better future.

Almost exactly a year ago, in a blog post titled “It’s Time to Build,” celebrity venture capitalist Marc Andreessen argued that the pandemic came to the West at a moment when it had lost faith in its capacity to make things. The path forward, he wrote, lies in recapturing the link between building and optimism, construction and energy: “The problem is desire. We need to want these things. The problem is inertia.” The work, Andreesen suggested, creates the energy to move forward, just as much as the other way around.

Andreessen is not the only thinker to link the sheer act of building with a renovated national soul. Conservative columnist Ross Douthat has diagnosed the current United States as a society governed by decadence and ennui, with ambitions that extend only far enough to manage its decline. Turning back to the fundamental practice of building things might be just the elixir of youth the country needs, especially after the year-long pandemic pause. Our task, now, is to take an active hand in shaping the environment to which we’ll return.

For an understanding of how powerful this shared endeavor can be, we can look to Israel. The early Zionists spoke of building the land of Israel and being built by it, implying that creation is a two way street — it changes our shared character. Long before Israel became the “Start Up Nation,” obsessed with artificial intelligence and cybersecurity software, it was one enormous building project. Swamps had to be drained, roads had to be laid, and crops had to be planted.

Those who undertook that work understood that it wasn’t just a way to achieve a distant goal. Instead, it was an end in and of itself, because it reversed what Zionist thinkers and activists saw as millenia in which Diasporic creation had been limited to intangible, conceptual things, rather than anything concrete and communal.

Of course this wasn’t entirely fair; it caricatured the experience of what had come before to underline the revolutionary nature of statebuilding. But the imperative to make things new doesn’t only happen once in a country’s history. It is a recurring obligation, a state of mind and plan of action that requires down payments now for benefits later.

A political system that can’t generate better things for its citizens makes itself vulnerable to demagogues and populist anger. A country whose environment is crumbling is unlikely to feel inspired or elevated. For too long, our problems have been bigger than us. It is time to reverse that, and a time to build.