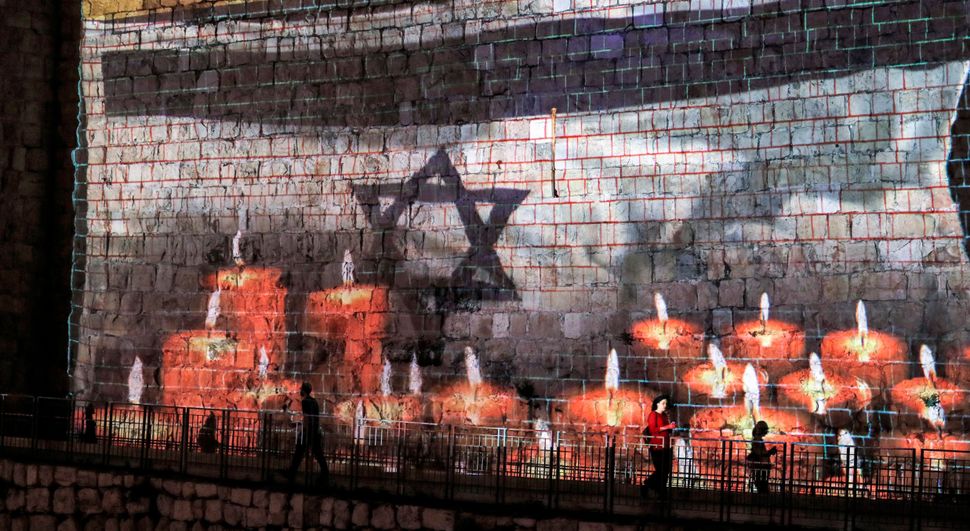 A projection of an Israeli flag flying before lit candles is displayed on the old city walls of Jerusalem on May 2, 2021, as Israel declares a national day of mourning for victims of a stampede during the Lag BaOmer holiday at Mount Meron. By AHMAD GHARABLI/Getty Images

Soon after the Lag B’Omer tragedy on Mount Meron, the prominent Haredi rabbi Chaim Kanievsky said that women needed to more strictly adhere to laws of modesty to help “rectify the divine decree.”

His words shocked me. And they made me think about how my mother, Sala, would have grieved for the families of the victims— and how she would have reacted to my fury at Rabbi Kanievksy’s pronouncements.

How can it be acceptable to blame such suffering on deficient ritual observance, I wondered? And why single out women for special censure?

My mother had seen this all before. After she was liberated from the concentration camps, she heard talk among the ultra-religious survivors who blamed the Holocaust on insufficient prayer. “Had we just davened better…louder…more correctly…stuck more closely to our laws and rituals…put the mezuzahs up properly…this would not have happened.”

I can still hear the pain in her voice as she repeated this line of reasoning.

How could anyone have doubted the sanctity of any of the victims — like her beloved father, Rabbi Josef Garncarz, a man of faith and learning and compassion? Was he to be blamed for his own murder?

She decided she no longer wanted to be Jewish.

That phase did not last long. When she was reunited with an older cousin who also survived, he assumed the responsibility of speaking in her father’s place. He knew her to be an independent girl who was already pressing against the boundaries of her family’s way of life before the war.

He admonished her to honor their traditions as she built a new life. He reminded her that the destruction of their families had created a profound obligation. His words were grave, all the more so because he had lost his own young wife and child.

My mother listened. It was an agonizing struggle to try to reconcile the slaughter of innocents with a belief in God.

Her return to Judaism was mechanical at first. She married an American who was neither as religious nor as learned as her father, but was Jewish. Her faith slowly returned, and with it, an unshakeable commitment to tolerance for the wide spectrum of religious belief and observance.

Never would she ask “where do you daven?” as a way to separate out the good from the unworthy Jews. For the rest of her long life, she moved without friction between the Haredi communities of Monsey and Brooklyn, the Modern Orthodox community she joined with my father, and my secular world in Manhattan.

I don’t exactly know how she did it. But somehow, the power of her own example held back the forces of intolerance and mistrust.

So what would she say now?

She would remind me that prayer and living our best lives is no guarantee of peace and tranquility. That some things are beyond our comprehension. And if we are motivated to question and redress, we must strive to do it with kindness.

Ann Kirschner is the author of “Sala’s Gift” and the co-chair of Footsteps.