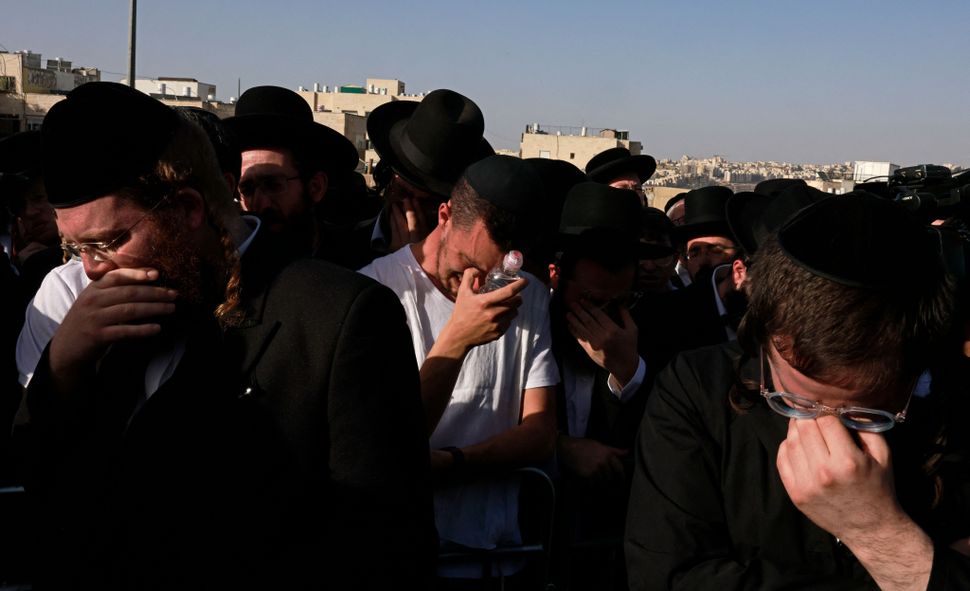 Ultra-Orthodox Jewish men mourn during a funeral ceremony in Jerusalem for a victim of an overnight stampede at a Jewish pilgrimage site, on April 30, 2021. Image by MENAHEM KAHANA/Getty Images

Every tragedy seems to cry out for an explanation. Initial explanations are practical and outline the worldly reasons why a terrible event occurred. For believers there is an additional burden — the question of how God could allow such suffering.

The deaths on Lag B’Omer at the tomb of Rabbi Shimon Bar Yochai on Mount Meron seem to demand a theological response. Surely, we’re drawn to think, the calamity contains a kind of deep significance.

I believe it does, but not the significance that most assume.

When something bad happens, the impulse of many believers is to seek to understand why God willed this result. People dealing with the death of a loved one often approach rabbis to ask how God could permit this to happen. When I was diagnosed with cancer, congregants asked me what God’s purpose was in giving me cancer — and some suggested possibilities.

Today, many Jews are asking themselves: What was God trying to teach us by having the faithful die on what should be a happy day, celebrating a great ancient sage?

My own belief is that much of what happens in the world is random, and that this conviction is the deepest way to express faith in God.

But if our good actions and bad actions determine consequences, then there is no possibility of genuine goodness. Everything is to gain a certain end. In reality, the only way to be good is to practice goodness without knowing what the result will be. You may be Rabbi Akiba and still die a painful death.

It is true that much of Jewish tradition lends itself to an instrumental way of thinking. In the second paragraph of the Shema, we are told that if Israel is good, the rain will fall and the crops will grow.

And yet in the face of such proclamations, experience teaches us that good people often suffer and bad people often thrive. Even children can observe that God has made a world in which randomness reigns and intuit that s’char mitzvah mitzvah — the reward of doing a mitzvah is in the doing. True goodness is a choice not to get a result, but to affirm the importance of goodness.

There are voices in our tradition that express just such a realization. In the Talmud, Rav Ami declares that people only die for sins they have committed. After some deliberation, the Talmud concludes: “there is death without sin and there is suffering without iniquity, and this is a conclusive refutation of the opinion of Rav Ami.” The Talmud elsewhere states that stolen wheat should by rights not grow and adultery should not result in a child, but “olam Kminhago Nohaig” — the world goes on its way.

In other words, the world follows natural, not moral, law.

It is a natural impulse to believe that the bad things that befall us are a product of our own conduct. While that can certainly happen — if you smoke all your life, lung cancer is a not unexpected result — much of the time it is not about what we have done, but what we were unlucky enough to endure.

Psychologically, we understand why people blame themselves. It is easier to feel guilty than to feel helpless. If we believe that acting a certain way will protect us — that God will not afflict us if we only keep kosher or observe the Shabbat or act kindly — then whatever misfortune has befallen us might be averted next time.

But sadly, there are no guarantees.

We can draw on God for strength, for consolation and for guidance. But when tragedy strikes, our task is not to ask why God did it, but rather how we can meet the tragedy with wisdom and courage.

We mourn for the lives lost and the families who are bereaved. In the name of those who suffer, let’s not increase their pain by assuming that somehow they were “targeted” by God. Much of life is unpredictable, some things unpreventable and still others just plain random.

Our sublimity is not in finding the reason but in crafting the response. If we rise from our prayers better Jews, our prayers have been answered.

David Wolpe is a writer and the Max Webb Senior Rabbi at Sinai Temple in Los Angeles. He has been named Most Influential Rabbi in America by Newsweek and one of the 50 Most Influential Jews in the World by The Jerusalem Post. Rabbi Wolpe is the author of eight books, including the national bestseller “Making Loss Matter: Creating Meaning in Difficult Times.”