We are all Lag B’Omer pilgrims on Mount Meron 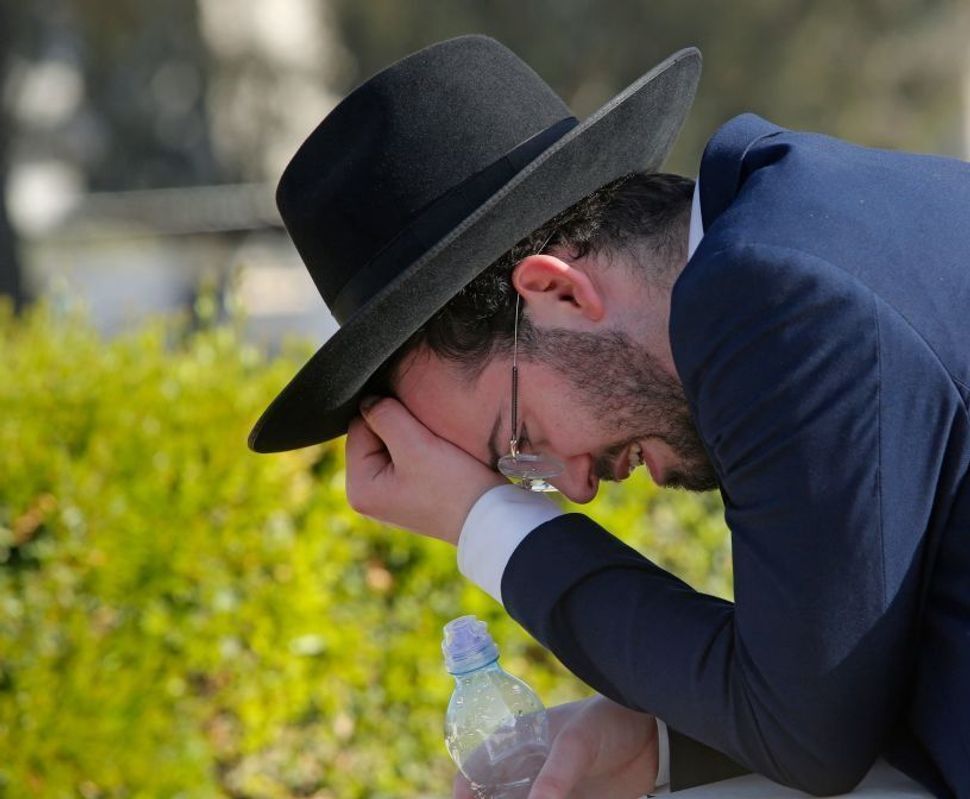 An man mourns at Segula cemetery during the funeral of a victim of the stampede at a Lag B’Omer event at Mount Meron in Israel. Photo by Gil Cohen-Magen/AFP via Getty Images

My daughter nudged me as soon as the news alert flashed on her phone Thursday night: a deadly stampede at a religious celebration in Israel. It grabbed us — not just as any such tragedy would, but as our tragedy. We lived in Israel for nearly four years. Those crushed to death were Jews like us, celebrating a Jewish holiday. Might we have known someone who was there?

But when I clicked through to the article and saw the photograph, an endless sea of Haredi men packed together despite the ongoing risk of coronavirus, I felt a distance larger even than the 5,647 miles that separate Mount Meron, where this horrific nightmare unfolded, and our home in Montclair, New Jersey.

It was a familiar quandary, intensified over this pandemic year but lurking long before: How to balance a visceral desire for connectedness and understanding among all Jews with a sense of alienation from those who live their Judaism so very differently from the ways that we do — sometimes in ways that feel like an affront to our core values, like feminism and a belief  in science?

I have never been to Mount Meron, and it seemed from the photographs I saw that I would not be welcome, as a woman, to participate in this annual pilgrimage to the grave of Rabbi Shimon ben Yochai on Lag B’Omer. I do not celebrate Lag B’Omer — I have vague recollections of learning about it in Hebrew school, and I recall there being bonfires and barbecues around our Jerusalem neighborhood, but I had to do a little Googling last night to get the details straight.

(It’s the 33rd of the 49 days between Passover and Shavuot — the Omer — and marks the end of a plague that killed thousands of disciples of Rabbi Akiva, who the Romans assassinated for defying their rules against teaching Torah; Shimon ben Yochai was an Akiva disciple and major kabbalistic, or Jewish mystic, said to have died on, you guessed it, Lag B’Omer.)

The whole thing reminded me much more of the Hajj, the annual Muslim pilgrimage to Mecca, than any Jewish holiday celebration I have ever attended. And of course the Hajj has been the setting for numerous stampedes far more deadly than what happened in Meron: more than 2,200 pilgrims killed in 2015, eight other fatal tragedies just since 1990.

News coverage of Meron described it as one of the worst peacetime disasters in Israel’s history, with a death toll, 45, similar to the number lost in the 2010 forest fire on Mount Carmel, near Israel’s coast. A colleague from wildfire territory in California recalled the solidarity he felt with Israelis back then. “We shared the same fear,” he noted. “We could totally relate.”

Can we relate, too, to this mass pilgrimage that went ahead despite warnings about both structural safety of the site and coronavirus risk, after a year of watching thousands of Haredi Jews, here and in Israel, gather for funerals and weddings against government guidelines?

We have to. We have to find a way.

It turns out that Lag B’Omer on Meron is not an exclusively Haredi event. A 2018 survey by the Jewish People Policy Institute found that 14% of Israeli Jews attend the pilgrimage “when they can” — including 10% of so-called “traditional” Jews, and 3% of self-defined secular ones.

Many Americans on gap-year programs at Israeli yeshivas also join in this experience, and one from my own state of New Jersey is said to be among the dead. I learned this morning that Louis Keene, a reporter I just hired, was on Meron in 2009.

And, according to this JTA article, women also flock to Meron on Lag B’Omer, praying passionately for hours in a separate section that maybe just didn’t get photographed.

Rabbi Benji Samuels, who presides over the Orthodox shul I grew up in and where my parents are still active members, wrote on Facebook Friday that his own son, Aryeh, was there — and is, thankfully, thankfully ensconced in the nearby city of Tsfat for Shabbat.

“Their sadness is profound, and their experience was traumatic,” he wrote, suggesting that we leave “the fault-finding, blame-gaming and post-facto public-safety assessment” to Israeli officials, and spend Shabbat reciting Psalms, increasing our “love, respect and support for others,” and “keep the bonfire of hope, passion and resilience burning warmly in our hearts.”

So we have a choice, as we consider this and all news events, tragic and otherwise: we can think about how the people caught up in them are different from ourselves — or we can look for what we have in common.

Israeli Jews of every tribe celebrate Lag B’Omer, if not with a pilgrimage, then with a bonfire or barbecue. So, too, do virtually all Israeli Jews observe Shabbat: many staunchly secular ones are as devoted to their weekly hikes — which by the way are often narrated by Biblical stories about the surroundings — as the religious ones are to davening in shul.

We can focus on what separates us or on what binds us. Thinking about the pandemic, we can see an unbridgeable divide between mask-wearers and mask-refusers — or we can remember that virtually all of us have lost someone to COVID-19. What parent cannot relate to the reports out of Israel this morning about mothers and fathers desperately searching for children who had been at Meron?

Maybe we have more in common than we realized with the people in that photograph. And maybe, too, with those who make the Hajj.

We are all Lag B’Omer pilgrims on Mount Meron