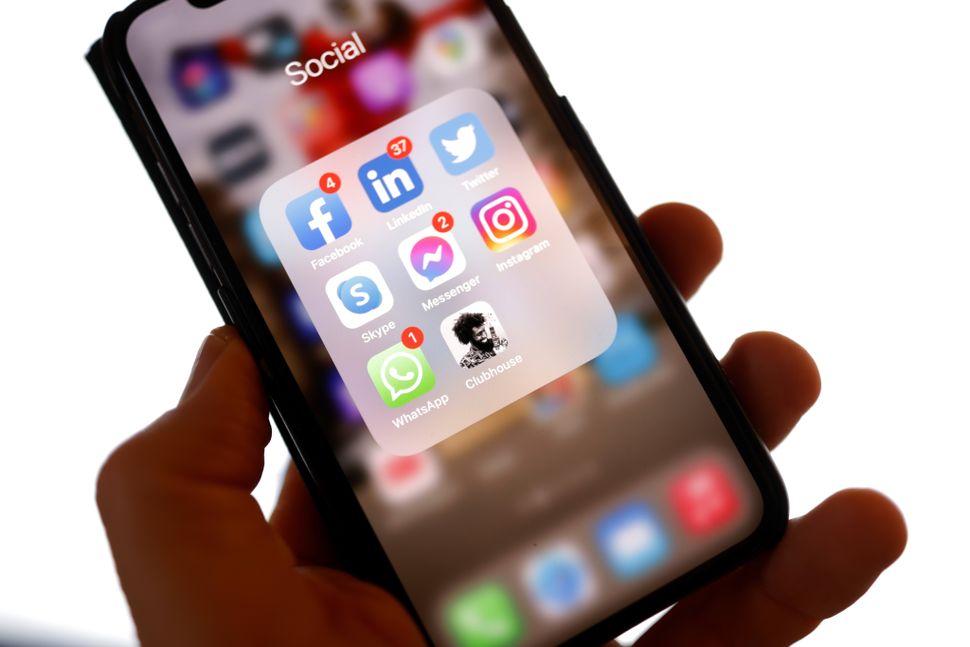 An illustration photo taken on January 25, 2021 shows the application Clubhouse on a smartphone By Odd Andersen/AFP via Getty Images

This fixes one of the more obvious exclusionary aspects of the app, still in beta, which has been downloaded by approximately 10 million users globally. But many inclusivity challenges remain — and hate speech is rampant — leaving many to ask whether the platform is worth using at all.

Having used the app, I don’t think it’s worth giving up on just yet. In fact, some Clubhouse users are creating extremely productive spaces, perhaps because conversations happen voice-to-voice instead of face-to-face. For the persistent who are willing to experiment, visit different rooms, and learn the strengths of the platform, Clubhouse presents an opportunity to put our Jewish values into practice and be the change we wish to see.

Clubhouse allows anyone to convene an audio-only conversation about any topic — from astrology to racism, from podcasting to the conflicts in the Middle East. Notable rooms have included a Holocaust survivor who shared his story with thousands of global listeners for 16 hours, or the organizers of the Tiananmen Square protest sharing their testimonies.

Think of Clubhouse rooms as Zoom meetings, without the video component, the chat or Q&A functions.

When users join a room, they are automatically muted. If a user wishes to speak, they can use the “raise hand” button, and a room’s moderators can “bring someone onstage” and allow speaking access at their discretion. In most rooms larger than a few people, there’s little back-and-forth; it’s more like a panel of speakers sharing perspectives one at a time.

The bar for convening a room is low — with an hour’s notice, a friend and I convened a “Friends Friday” room to see if anyone wanted to talk about their favorite “Friends” episodes. (A handful of people joined.) By design, the audio recordings are not saved, and it violates the app’s terms of use to record without permission.

The ease with which one can create a chatroom makes it ideal for impromptu or ad-hoc gatherings — and an easy place for hate to spread unchecked. Users have hosted some famously hostile anti-Semitic conversations; last September, several outlets reported that a room convened, on Yom Kippur, to talk about anti-Semitism in Black communities devolved into anti-Semitic stereotypes and statements.

There was an additional swell of anti-Semitic and anti-Israel sentiment on Israeli Independence Day in April 2021; after each of these inflection points, a number of users left the platform. This problem is not unique to Clubhouse, but is certainly something on the app’s radar: in April, the Forward reported that the Anti-Defamation League was working with Clubhouse to address the problem.

Since conversations on the platform vanish, there’s no record of what exactly happened in these rooms, and if violators are not caught in the moment or noted and reported by moderators, cracking down is more haphazard and social than scientific and professional.

Thankfully, the conversations I’ve joined over the last week — mostly about Israelis and Palestinians — have been passionate but not confrontational. Speakers relayed their personal stories rather than lobbing accusations or justifications. Participants listened, and occasionally asked questions, but didn’t engage in any whataboutism. These moments of hope are important to the future of Clubhouse and to the conflict.

But there’s more than just unchecked hate making the platform alienating to some — certain features of the platform make it downright inaccessible for many users. One Forbes contributor called Clubhouse “a club so exclusive, it excludes disabled people by design,” pointing out the lack of live captioning that hearing impaired or deaf listeners would need to participate, and that the app’s interface, font and background can be hard to read, even for those who aren’t visually impaired but do use corrective lenses or reading glasses.

“Our goal has always been to build Clubhouse for everyone,” a Clubhouse spokesperson told me via email. “We feel incredibly grateful for all the accessibility and disability-related clubs that have formed on Clubhouse and for the valuable feedback that they provide. We have worked closely with The 15% Club [an internal group working on accessibility] to add voice support to the app over the past few weeks, and are continuing to work closely with the deaf community to roll out close captioning features in the near future.”

This response may or may not satisfy accessibility activists and users with disabilities, but not everything leaps from the ideation chamber fully accessible to and appreciated by everyone. As the app is still in beta, I’m willing to give it a chance.

Some have suggested abandoning the platform until its creators “fix” the accessibility problem which would leave it to the trolls. But, online and off, discussions can only be as robust, well-intentioned, intelligent and compassionate as those who participate in them. If those who care about inclusion, anti-racism, and standing up for minorities leave the platform, then what will be left? And if we can’t change the app itself, what can we do to make sure that vital conversations have a life beyond that room and reach whoever needs to hear them?

Conversations do not start, nor do they end, with Clubhouse. During a recent meeting of the Jewish Community Pros room on Clubhouse, attended by about 100 users who self-identify as Jewish communal professionals in varying roles, I took notes on the conversation, added my analysis, and posted them on Facebook where others — who couldn’t be in the room due to scheduling conflict or a non-Apple device — could access some of the points covered in the conversation.

The post got 193 likes and generated 78 comments on the topic, providing a space for the discussion to reach nearly 200 people who otherwise would have been left out.

It’s not a perfect system, as I can’t be (and don’t wish to be) in every conversation — even those I care deeply about — as they’re happening, and because Facebook posts are still inaccessible to some. But it’s my own personal start.

Social media engagement is a chance to lead by example.

If you’re participating in an interesting conversation — or an infuriating one — on Clubhouse or anywhere else, share your report on it, ask questions and engage others.

Be the kind of participant you want to see more of in these spaces. Those of us who love a good Jewish textual connection could invoke Pirkei Avot: “in a place with no humanity, try to be human,” or that “it is not on us to finish the work but we are not exempt from engaging in it.”

We could also imagine ourselves as the grownups, lifting our nephews and nieces onto our shoulders so they can see more of the big picture. Or maybe we should refer to Clubhouse — and all our efforts newly launched into the world — as “Tikkun Olam: now in beta.”