I’m glad Marjorie Taylor Greene apologized for her Holocaust comparisons. What she does next matters more 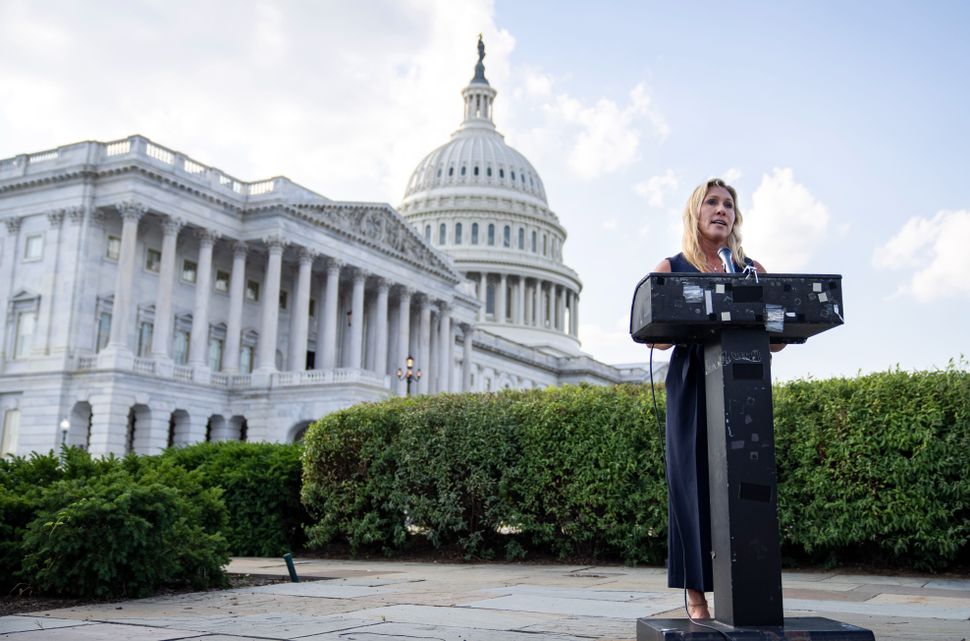 U.S. Rep. Marjorie Taylor Greene (R-GA) speaks at a news conference after visiting the Holocaust Museum, outside the U.S. Capitol on June 14, 2021. By Drew Angerer/Getty Images

It’s not easy to apologize. It’s even harder to transform an apology into meaningful change.

On June 14, Rep. Marjorie Taylor Greene held a press conference in front of the U.S. Holocaust Memorial Museum and apologized for her statements equating the Holocaust to mask mandates. After her tour, she said, “There are words that I have said, remarks that I’ve made that I know are offensive, and for that I’d like to apologize… I should own it. I made a mistake.”

This is Washington; politics likely provided an incentive for Greene’s change of heart, following criticism from her Republican colleagues for comparing the COVID precautions in this country to Hitler and the Holocaust.

But that doesn’t mean her apology is worthless. In coverage of the apology for the conservative commentary site HotAir, the anonymous blogger Allahpundit wrote, “[g]ood for her for going and apologizing. Although it shouldn’t take until a visit to the Holocaust Museum in your late 40s to arrive at the conclusion that comparing mundane grievances to the Holocaust is a bad idea.”

I feel similarly and would like to know: What comes next?

I’m willing to accept that this is a sincere apology and applaud it as such. But given the surrounding issues at play, with the threat of censure on the table and the previous loss of her committee assignments after other charged statements, there is ample reason to be cautious.

Embracing Marjorie Taylor Greene’s apology wholeheartedly — and at face-value — is one thing. But after a slew of inappropriate comments, accepting your mistake and making a sincere statement of contrition is only the beginning. In order for Greene to deserve a future in the Republican Party, she needs to take concrete actions, not just make statements, that show she is working to change.


Over the course of the last year, a number of celebrities have made unfortunate antisemitic comments. Following such incidents, we can always learn from watching what happens next.

In March, Miami Heat basketball player Meyers Leonard was fined $50,000 and suspended by the NBA for antisemitic comments made on a video game livestream. Instead of simply bowing his head in shame and going away quietly, Leonard’s now-friend Rabbi Efrem Goldberg of Boca Raton Synagogue explains that the star has been making amends, most recently holding a basketball clinic at the synagogue for Jewish youth.

To be sure, if one truly has a habit of expressing antisemitic views, volunteering once in a Jewish town doesn’t mark a full atonement or give you a free pass. But after making an apology, if one is sincere about changing, the next step needs to be a genuine action towards the community you’ve hurt, however small that action may seem from the outside.

It was a similar story for Nick Cannon, who also found himself in hot water last year for making antisemitic comments. In August, following an apology, Cannon appeared on an American Jewish Committee livestream with Rabbi Noam Marans, in which he explained he’d been “expanding his initial apology into atonement by his education and actions, which include reading books [on the Chabad Rebbe] … attending a Shabbat dinner; and potentially building Black and Jewish community centers in disenfranchised communities with American-Israeli pro basketball player Amar’e Stoudemire.”

As Cannon told Rabbi Marans, “Apology is a step, but atonement is a process.”

While it’s true that a 47-year-old woman (especially an elected Representative to the United States Congress) should understand history enough not to make insulting comparisons, unfortunately, we know just how dismal Holocaust education is in this country — and knowing about the Holocaust is a very different thing from knowing how to honor its memory. That’s something one visit to a museum, no matter how educational, can never teach.

Will she take the next steps to educate herself about the Jewish community, antisemitism and honoring the memories of those who died during the Holocaust?

For the sake of her soul, not to mention our national discourse about antisemitism and the Holocaust, I certainly hope she does.

I’m glad Marjorie Taylor Greene apologized for her Holocaust comparisons. What she does next matters more