Last Rosh Hashanah, we lost RBG. This year, her legacy is in jeopardy 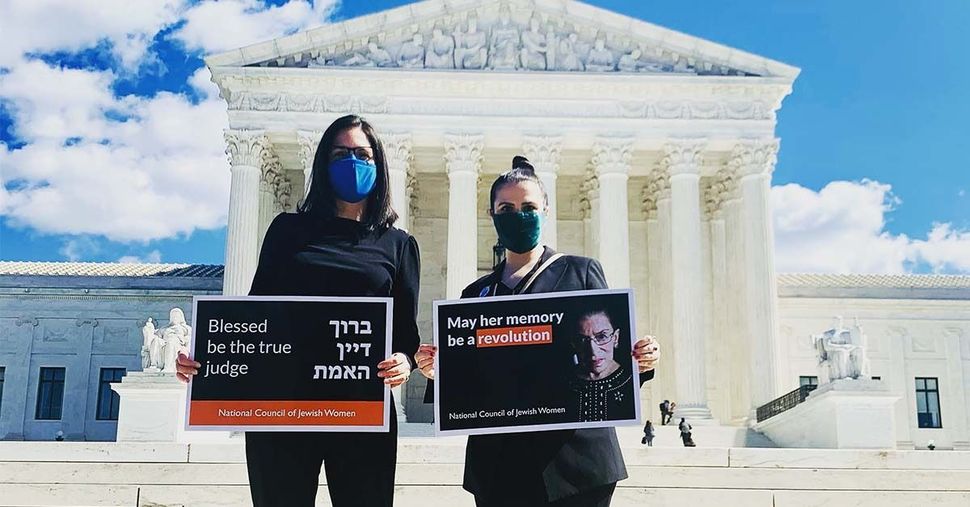 When people across the country woke up on Wednesday, they opened their eyes to a new era of injustice.

As of midnight Central Time, legal abortion was effectively banned in the state of Texas, and it’s clear the rest of our country could be headed in that direction.

Although the U.S. Supreme Court had the authority to stall or stop the ban in response to an emergency petition filed early this week, as of Wednesday evening, they have not done so.

Now, anyone who helps a person get an abortion in the state of Texas after cardiac activity has been detected in the fetus — usually around 6 weeks after conception — can be sued, even by someone who lives outside of Texas. A successful lawsuit would reward that person with at least $10,000 — to be paid by the person sued.

Lawsuits can be filed against a broad range of people who “helped,” including: a person who drives their friend to obtain an abortion or an Uber driver; abortion funds providing financial assistance to patients; health center staff; and even a member of the clergy who counsels an abortion patient.

There are no exceptions in cases of incest or rape, or for someone who finds out their fetus is not viable. The only legal abortions will be those performed due to a medical emergency.

Last year on Rosh Hashanah, we lost reproductive rights giant Justice Ruth Bader Ginsburg. Now, in the days leading up to Rosh Hashanah, we are witnessing the Supreme Court sit idly by as the most restrictive abortion ban any state has ever imposed goes into law.

It’s up to us to fight back in Justice Ginsburg’s legacy.

Abortion access is not only a 14th Amendment issue, as the Supreme Court itself ruled with Roe v. Wade in 1973, but also a 1st Amendment issue. In Jewish tradition, a fetus does not have the same rights as a person, and abortion is not only permitted, but required when the life of the pregnant person is at risk.

While many of the opponents of abortion cite their personal religious convictions, we know that, with the exception of Evangelical Christians and Mormons, majorities of every American faith community surveyed by Pew Research actually say that abortion should be “legal in most / all cases,” including the majority of Catholics and 83% of Jews.

The inaction by the Supreme Court not only puts millions of Texans at risk — particularly women, people of Color and LGBTQ folks — but also makes it clear that this Court is willing to uphold laws that directly violate Roe v. Wade and create barriers to access this essential health care.

Now that the law is in effect, the average driving distance for a Texan who needs to access abortion will increase from 12 to 248 miles each way. This means that pregnant people will have to travel out of state – in the midst of one of the biggest public health crises of modern times – to receive constitutionally guaranteed health care. For many, with child care and travel costs, this is likely impossible.

Someone making minimum wage, $7.25 an hour in Texas, would have to put more than 3.5 hours’ worth of earnings toward the cost of gas to cover the additional one-way cost of travel. That amounts to a full day’s earnings solely to pay for the additional amount of gas for each round trip, not including the fee for the procedure itself.

And this very well may not end with Texas. The Supreme Court is set to hear a case next term, Dobbs v. Jackson Women’s Health, that may decide the future of legal abortion in the country.

This specific case will examine a Mississippi law that would ban abortion at 15 weeks of pregnancy. This ban is less restrictive than Texas’ law, but also attacks a core aspect of Roe v. Wade, and has the capacity to overturn Roe, essentially banning abortion in 22 states, if the Court upholds it.

It is quite easy to feel helpless, but the fight isn’t over. We must call on our members of Congress to pass the Women’s Health Protection Act that would effectively reverse the Texas law and ensure all people can access essential health care, regardless of decisions from the Supreme Court.

We must mobilize to support abortion clinics in Texas and across the country. We must share our own reproductive stories with others to help break the stigma, and encourage our clergy members to teach, write and speak out about reproductive rights and Judaism.

We must continue to advocate for access to abortion so that everyone, not just those in positions of religious, financial or geographic privilege, can make their own health care decisions with dignity.

May Justice Ginsburg’s memory be a revolution. We have the power to do so right now.

Last Rosh Hashanah, we lost RBG. This year, her legacy is in jeopardy