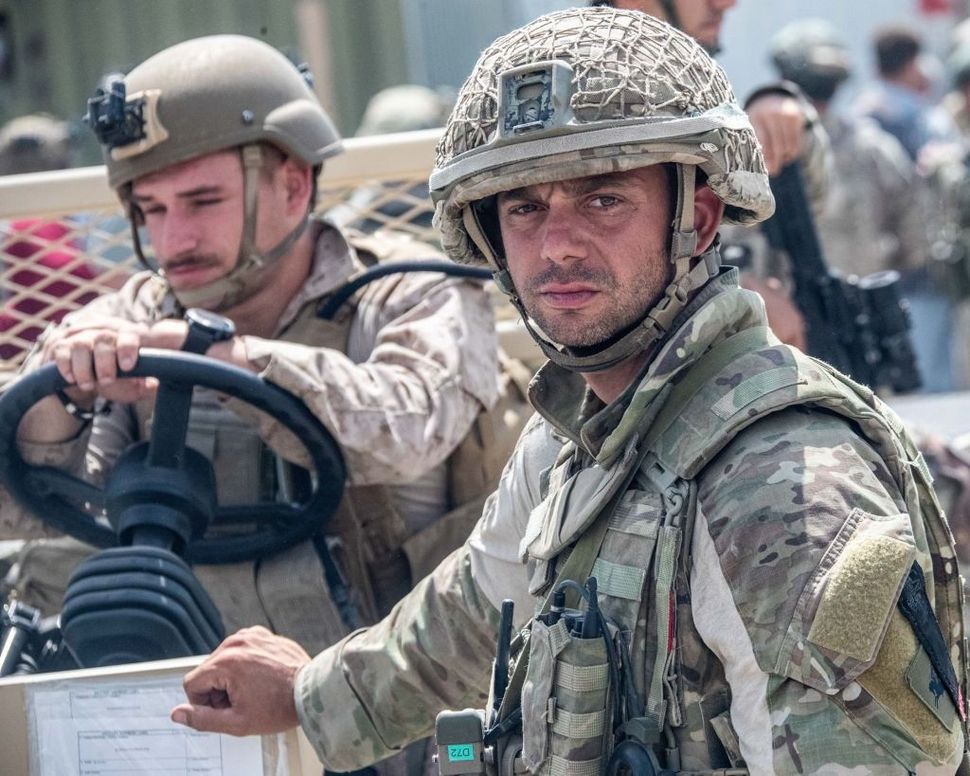 British armed forces work with the U.S. military at Kabul Airport to evacuate eligible civilians and their families out of the country, August 21, 2021 Courtesy of Getty Image News

After graduating from college, I assumed I would leave the dangers of Afghanistan to our military and focus on studying for the Jewish clergy. Growing up on the Upper East Side, Judaism was always defined more by comfort and fun than by difficult sacrifice. I was inspired by the music of Congregation B’nai Jeshurun and Central Synagogue, and I enrolled in the cantorial training program at Hebrew Union College with dreams of leading services in a similar environment. But the more I studied Judaism, the more I realized there are other places our clergy are needed as well.

Two thousand years ago, Hillel the Elder, one of history’s most famous rabbis, urged Jews to choose the harder right over the easier wrong. “In a place where no one is human,” Hillel taught, “strive to be human.”

As I planned my next career move, I had to concede that Hillel probably wasn’t talking about Westchester or Long Island. I commissioned as a U.S. Army Chaplain in 2011 with one goal in mind — to serve my country and its Jewish personnel in Afghanistan — and the weeks I spent there in 2012 and 2016 were the most meaningful of my Army career.

Today, the Taliban’s complete reconquest of Afghanistan has challenged American society with difficult questions. How long should we have remained committed to our goals there, and at what price? What were our obligations to our Afghan partners? Was our national sacrifice of 2,500 dead and tens of thousands wounded ultimately rendered meaningless by the victory of our enemies?

As specific as these questions may seem, the larger issues behind them are not new to Judaism. And just as Jewish wisdom and experience guided me into Afghanistan, I believe they can guide us all as we depart.

Hillel’s most famous quote offers a helpful structure in which to further explore Jewish thoughts on our country’s withdrawal from Afghanistan.

America’s mission in Afghanistan was always driven by our own national security. Over time, however, it became harder to justify their costs in the name of our own interests.

Rabbinic thinkers pondered these very issues 20 years ago, when the State of Israel found itself in a similar situation.

During the 1970s, the country of Lebanon harbored Palestinians who committed terrorist attacks against Israel. In 1982, Israel invaded Lebanon to expel the Palestinians, which they accomplished in a matter of weeks. But rather than withdrawing at that time, Israel unsuccessfully attempted to install a friendly government in Beirut and train its fighters as the new South Lebanon Army.

These efforts only created bigger security problems than they had first set out to solve: the Israelis inadvertently unified a Shiite resistance in the creation of the paramilitary force, Hezbollah. And yet, despite continuous casualties and strategic failures, Israel remained in Lebanon for 18 years — the longest war in Israel’s history. In the years that followed, the Lebanon War was often referred to as Israel’s Vietnam.

In debating whether to withdraw from Lebanon, Israeli political leaders feared that “running and panic” would damage national prestige, and that abandoning the friendly forces of the South Lebanon Army would repay their loyalty with betrayal. Israeli military leaders insisted that withdrawal would limit their deterrence of future attacks.

For them, the loss of Israeli life in the never-ending occupation of Lebanon was too high a price to pay in the name of national honor and security. A war that had started in Israel’s self-defense had come to seem more beneficial for Lebanese opponents of Hezbollah than for Israel itself.

Rabbi Yehudah Amital, a highly influential leader of the Modern Orthodox community, argued this position when Israel ultimately withdrew from Lebanon in 2000. “I do not belittle the value of national honor — sometimes critical in deterrence,” Amital wrote. “Yet, I don’t accept the claim that our partnership with the South Lebanon Army was so strong as to prevent our exit from Lebanon. The value of pikuach nefesh, saving a life, and especially the lives of IDF soldiers, supersedes the weight of national pride.”

In debating whether to withdraw from Afghanistan, we have heard similar arguments. In an interview with NPR, former National Security Advisor John Bolton called the decision to withdraw a “national humiliation” and advocated for a continued US military presence in Afghanistan. “I want to keep America safe from terrorist attacks,” he argued, “and I think a continuing presence there would have been an insurance policy.”

The rabbis warn against the sacrifice of life on the slippery slope of deterrence and insurance. As the great Medieval sage, Rashi, put it, “In the case of a certainty versus a possibility, we prefer to follow the certainty.” If I am not for myself, who will be for me?

But that is only half the story. While the decision to withdraw from Afghanistan was supported by Jewish values, the ill-coordinated and insufficient support of our documented Afghan partners is most certainly not.

Jewish law requires us to rescue the vulnerable from their oppressors and resettle them in our midst, and to deal fairly with workers by promptly paying what we owe them. We promised we would stand with our stranded partners in Afghanistan, in return for risking their lives to help us make their country and ours a safer place.

But in the end our rescue efforts have proceeded too slowly, mired in a fog of bureaucracy, and our failure to uphold these most basic of Jewish values has meant more than simply overdue wages. For the thousands of Afghans stranded at the gates of the Hamid Karzai Airport, forced to return to their lives under Taliban rule, it has meant the threat of death.

Nonprofits and NGOs from across the religious spectrum have been working day and night to resettle our Afghan partners with the urgency they deserve. HIAS has mobilized staff to Fort Bliss, Fort Lee and other military posts around the country to assist in resettling Afghans who are currently arriving, and a host of other Jewish organizations are advocating for more responsive action from the federal government in support of those still awaiting evacuation. It remains to be seen whether their efforts will be enough, but their actions reflect the Jewish value of helping those in need, whether they are Jewish or not. If I am only for myself, what am I?

The third and most painful question still remains: was our sacrifice worth it?

As badly as we want to see the outcomes we hope for, the Book of Ecclesiastes teaches that God makes everything beautiful in God’s own time, not in ours. This lesson is manifest in Judaism’s encouragement to plant trees, not only for the environment’s sake, but also for the optimism and foresight it requires. The Talmud tells of a wise man who was once asked why he plants trees if we will not live long enough to enjoy their fruit. “Just as my ancestors planted for me,” he answered, “I too am planting for my descendants.”

Afghanistan in 2021 is not the same as it was 20 years ago, as Thomas Friedman put it, “precisely because of the social, educational and technological seeds of change [we] planted over the last 20 years.” Had we waited for the Taliban to reform themselves into democratic enthusiasts, we would never have risked the difficult steps to start that process.

Therein lies the urgency of Hillel’s final charge to us: If not now, when? If we always wait for a guarantee of success, we will never take the first, difficult steps toward positive change.

The time may have come for us to leave Afghanistan, but thanks to our sacrifice there, the American values of equal opportunity and civil liberties will continue to inspire future generations of Afghans long after we have departed.

Last year, when Secretary of Defense Lloyd Austin addressed the West Point graduates of 2021, he reflected that although the world had changed a lot since he graduated in 1975, he believed the solutions to its challenges were rooted in timeless lessons.

The same is true about Judaism. In some ways Hillel’s world of two thousand years ago was very different from ours, but in the most human ways it was no different at all.

Hillel may never have seen his country extricate itself from a 20-year occupation. But if he had, he would have likely turned to the same Jewish values that can guide us now: the value of our lives, the value of our obligations and the value of our best effort, no matter what the outcome.

Cantor David Frommer serves as the Jewish Chaplain at United States Military Academy West Point. The opinions expressed in this piece are his own and not those of USMA.