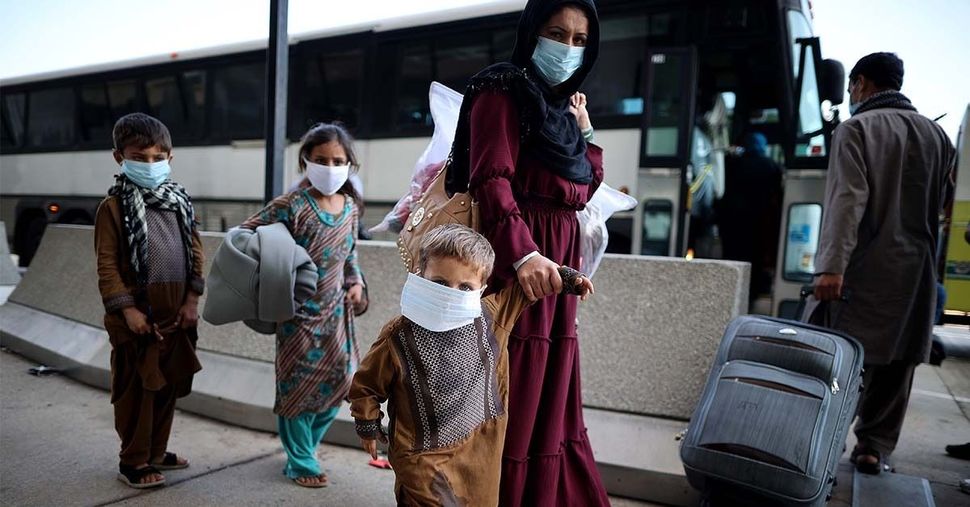 Refugees board buses that will take them to a processing center at Dulles International Airport after being evacuated from Kabul following the Taliban takeover of Afghanistan August 27, 2021 in Dulles, Virginia. By Chip Somodevilla/Getty Images

This has been a tough week for all of us at HIAS, but it has been so much worse for the people of Afghanistan.

My mind is occupied by the family members of the Afghans and the Americans who were killed at Karzai Airport today, and for the many people of Afghanistan whose lives are at risk because they worked with Americans, advocated for women’s rights or have religious practices different from those of the Taliban.

My colleagues and I have received hundreds of frantic calls, texts and emails from people with relatives desperately trying to escape. All of these folks are asking us what they can do. Only a few of them have secured the paperwork they need to leave the country. And many of those who have the necessary documents cannot leave.

We have been working closely with retired military and government officials trying to get vulnerable Afghans to anyplace that will take them — even temporarily. There have been some successes, but far more failures. Our partners secured more planes and passengers than destinations.

On Thursday, I participated in a webinar on Afghanistan with Rep. Andy Kim, who is famous for literally getting on his hands and knees to clean up the mess in the rotunda after the January 6 insurrection. On the webinar, Rep. Kim aptly summarized how we should all be responding to Afghanistan: Instead of throwing up our hands, we need to roll up our sleeves.

So far, 18 of my colleagues have volunteered for immediate deployment across the United States. They are helping Afghans and their families who were urgently paroled into the United States safely complete the process of procuring Special Immigrant Visas, which are given to interpreters who risked their lives to support U.S. troops. Likewise, our partner agencies across the country — most of them Jewish Family Service agencies — have unfurled their welcome mats.

We are confident many Jews in the United States and elsewhere will do the same. In fact, we are counting on them to.

The U.S. government intends to give HIAS and our partners $1,225 in assistance per Afghan parolee — to be applied toward a month’s rent, furniture, food and cash needs.

This comes far short of covering the essentials. Healthcare for refugees is not covered, nor are the costs of internet connectivity, smartphones or computers. We and our partner agencies will need a lot more than $1,225 in order to cover the expenses for Afghan heroes to get back on their feet in their new country.

With your help, we can make sure these brave new Americans get the welcome they deserve.

I started at HIAS 32 years ago, yet have worked for the agency for only a fraction of its long history. Never have I felt so connected to my predecessors as I have this week. They, like us, were in the business of saving lives. But they, like us, could never do nearly enough.

We at HIAS are all too familiar with the Voyage of the Damned — the 1939 journey of the M.S. St. Louis, filled with over 900 Jews fleeing from Europe, which was not allowed to land in Cuba or in Miami.

The boat was ultimately turned around and sent back to Europe. 227 of those souls perished before the end of the war. For HIAS, Afghanistan is this tragedy all over again.

The difference between the HIAS of today and the HIAS of WWII is that my predecessors did not have any laws or international treaties they could cite to protect refugees. It took the United States until 1968 to sign onto the Refugee Convention to ensure that never again would refugees be turned away at a nation’s frontier. Yet now, the United States and other countries do all they can to stop refugees from even reaching their frontier.

Even before September 11, 2001, a boatload of 433 refugees fleeing the Taliban was sinking off the coast of Australia. The refugees were rescued by the Norwegian freighter MV Tampa, but the Australian government refused to give the refugees permission to dock, abdicating its responsibilities under international law.

I remember this event well — it happened the very week that HIAS celebrated its 120th anniversary on September 9, 2001. At that time, colleagues joked about the irony of having a 120th birthday party. 120 was the age of Moses when he died just before reaching the promised land. The Jewish expression is “may you live to be 120” — not “may you live to be over 120.”

HIAS has lived for twenty years beyond our 120th birthday celebration. As we’ve learned this week, however, we must remain alive until the need for a Jewish agency for refugees subsides.

We’re not there yet.

I wish HIAS was no longer needed. I wish we could have closed our doors at the age of 120, with our mission accomplished.

But as we learned in Afghanistan this week, we are nowhere near the promised land.

So let’s roll up our sleeves and get back to work.

Mark Hetfield is president and CEO of HIAS, a Jewish American nonprofit organization that provides humanitarian aid and assistance to refugees.