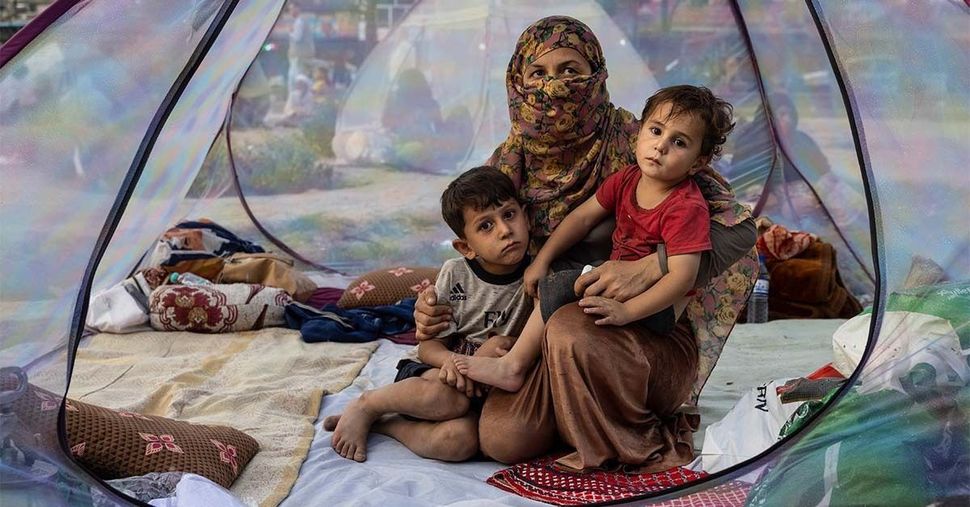 Farzia, 28, who lost her husband in Baghlan one week ago to fighting by the Taliban sits with her children, Subhan, 5, and Ismael, 2, in a tent at a makeshift IDP camp in Share-e-Naw park to various mosques and schools on August 12, 2021 in Kabul, Afghanistan. People displaced by the Taliban advancing are flooding into the Kabul capital to escape the Taliban takeover of their provinces. By Paula Bronstein/Getty Images

As the Taliban entered Kabul, one former translator for the U.S. military felt she was living through a horror movie.

“Nobody wants to leave their home because they don’t know if they’ll make it back alive,” she told me via WhatsApp on Wednesday.

“The past 20 years feel like a dream. Overnight everything has changed.”

She told me that her brother, another translator, had received an email from U.S. officials directing him to head to the Kabul airport with just his family, one bag of belongings and their paperwork.

“What if they get stopped by the Taliban along the way?” she wondered.

“Everyone told us to burn any evidence we worked for America. But we need that paperwork to get out. We called a car. I’m sitting here with $200 in my pocket, my document and a lot of hope in my heart.”

As an American Jew and descendent of refugees who fled the pogroms of Odessa and the Holocaust, this narrative feels horrifyingly familiar.

We as Jews know the story currently unfolding in Afghanistan. We have lived it — and know it doesn’t end well for those left behind.

On Sunday, President Biden ordered commercial airlines to assist in the evacuations, a hopeful sign. But this alone will not be enough. Knowing the consequences of delay and inaction, we have a moral obligation to do everything in our power to help persecuted minorities and political targets trapped in Afghanistan reach safety.

We must do it now, before it is too late. 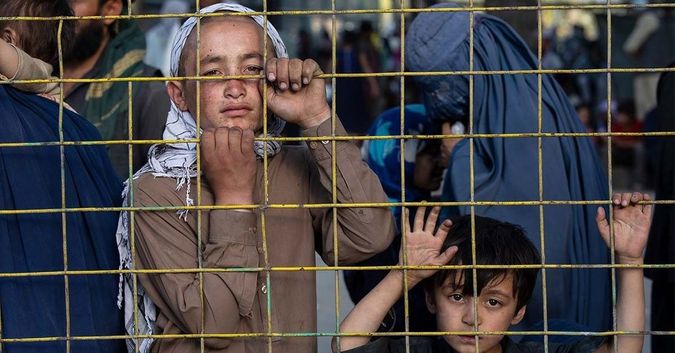 Displaced Afghans look through a fence at a makeshift IDP camp in Share-e-Naw park to various mosques and schools on August 12, 2021 in Kabul, Afghanistan. People displaced by the Taliban advancing are flooding into the Kabul capital to escape the Taliban takeover of their provinces. By Paula Bronstein/Getty Images

One summer day 80 years ago, the world ignored the urgent pleas of an ancestor I never got to know. A letter written from the Warsaw ghetto, dated June 30, 1941, haunts me.

“I am begging you dear Leo,” the last headmaster of Poland’s illustrious Yeshiva Chachmei Lublin wrote to his brother in New York. “The postal packages have not yet arrived from Switzerland.”

The parcels he alluded to were forged passports from a Polish diplomat stationed in Bern, Switzerland, meant to secure his safe passage to Paraguay. His brother Leo had acted swiftly early on in the war, and had paid handsomely for them.

As in 1941, those who are trapped are begging us to help them. Things change quickly in times of war; any delays can have deadly consequences. 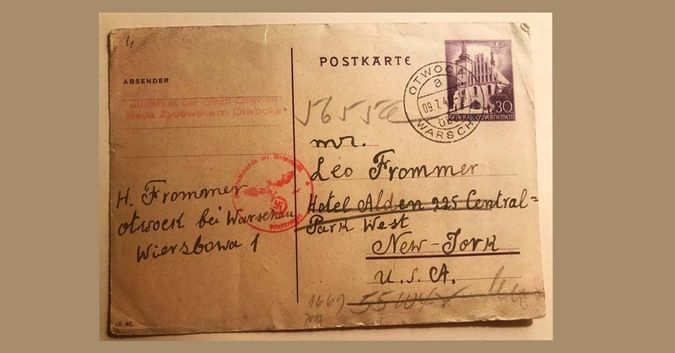 As soon as he heard Kabul had fallen to the Taliban, one former Afghani government official clamored to get his parents and siblings, who had returned to Kabul for a family wedding, out of the country.

“They have return tickets, but no one expected Kabul to fall so quickly,” he told me on Thursday. “It fell in the midst of my brother’s wedding.”

At the time of filing this story, his family had cleared two of the airport checkpoints, and the former official was hopeful they would make it onto the next flight. But he and others who have escaped know securing a departure is a race against time.

While helping process their paperwork, one friend who works for an international aid organization recalled family letters from ancestors caught inside Nazi Germany. The first notes, written in 1939, convey a sense of hope that something will work out:

“We don’t think carelessly but with hope and faith in the future.”

Two years later, as options for exiting Germany dwindled, the tone shifted to one of doomed resignation:

“At the moment there is nothing to be done.”

I feel this sense of resignation in messages I recently received from one 22-year-old student. A member of the Hazara religious minority, she is currently in Kyrgyzstan on a student visa, and desperate to get her parents and sisters out of Afghanistan.

A Muslim group with Asian features and a distinct dialect, Hazaras allow women to be educated, employed and not cover themselves in hijabs or burqas. This makes them one of Afghanistan’s most persecuted peoples, and at great risk of being ethnically cleansed by the Taliban.

The student says her work for international aid organizations has further endangered her family. She started to receive personal threats shortly after she began relief work when she was 16 years old. Her father survived a near-fatal car crash, which she suspects was no accident. Then her 12-year-old sister was shot outside of her girls’ school, sustaining injuries that have left her partially paralyzed.

Since the Taliban took over, the family’s chances of emigrating have narrowed, as hundreds of thousands of Afghans apply for refugee status.

“My worry is getting them here,” Mark Hetfield, president and CEO of HIAS, told me by phone.

“For someone in that situation, you need a referral from the U.N. or U.S. embassy or you have to fit into a humanitarian category just to place an application, let alone be successful. It’s a very long road.”

In the interim, the student’s family has gone underground for fear of being hunted and killed. Because her injured sister is wheelchair bound, they couldn’t escape illegally by foot even if they could afford to pay smugglers.

Desperate for help, one of her sisters went to the International Rescue Committee headquarters in Kabul, only to find herself surrounded by Taliban forces and chased down the street.

On Friday, the IRC told that sister they could only accommodate her visa request, not that of her family, and that paperwork would take a year.

HIAS has since taken on the family’s case, but it and other agencies are in a race against time as the Taliban becomes more brazen by the day. We cannot let their lives hang in limbo because of red tape.

Despite the Taliban’s talk of human rights, how can anyone believe them when public executions have already begun?

We cannot fall for the propaganda of a terrorist regime vying for legitimacy on the world stage, the way British Prime Minister Neville Chamberlain did when he handed Sudetenland to Hitler in 1938.

At the time, British citizens were relieved that Chamberlain’s doctrine of appeasement helped them avert war. But six months later, Hitler conquered all of Czechoslovakia, and after another six months, on September 1st, 1939, he invaded Poland, prompting World War II.

Chamberlain’s inaction directly affected me. My own mother, born along the German corridor in Poland, was about to start eighth grade that fateful September day. A year later, in 1940, she was organizing resistance actions in her hometown of Sosnowiec’s open ghetto with friends in her Zionist group Hanoar Hatzioni.

One of them was her next-door neighbor Lorka, whose mother wrote to an American relative requesting her help to save her children. But U.S. immigration quotas prevented any of them from securing a way out. 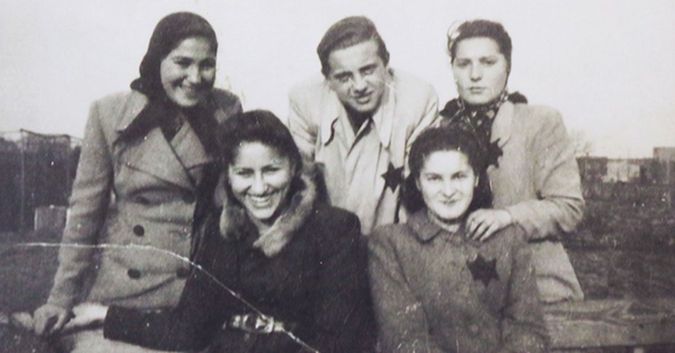 By January 1941, my mother was arrested and deported to a Nazi forced labor camp in Sudetenland. She was only 14 years old. Lorka was seized a few months later, while their families languished in the ghetto, only to be killed in Auschwitz when the Sosnowiec ghetto was liquidated in August 1943.

The international community ignored the cries of a grandmother I would never meet, of families walled in ghettos, concentration camps and gas chambers in the 1930s and 40s.

“It’s a similar story of nowhere to run, borders overrun by the enemy, U.S. visas denied and delayed past the point of no return, the despair of family members who are already in safety but can’t get past U.S. government indifference or distraction or worse,” Atina Grossmann, a history professor and Holocaust scholar at Cooper Union in New York, told me by phone.

If we can’t deploy our legacy as American Jews in the short time before the mass killings start, then what does “Never Again” actually mean?

We must harness Holocaust memory to mobilize international pressure to rescue those trapped in Afghanistan. We cannot let them meet the same fate as our ancestors who were brutally murdered while an uncaring world looked the other way.

Despite my great uncle Leo’s many attempts to evacuate his brother, Rabbi Frommer and his family were killed in Majdanek days after the Warsaw ghetto uprising.

It’s been reported that as he was taken to the gas chamber, my great uncle clapped his hands and said, “let us sanctify God’s Name with joy.”

Though many wondered where God was during the Holocaust, he never did.

I, though, have wondered where humankind was.

I keep his letter nearby as a constant reminder of what happens when good people don’t act swiftly when every moment counts.

Marisa Fox-Bevilacqua is a New York-based journalist whose documentary about her search for her mother’s hidden Holocaust past, My Underground Mother, was just awarded a grant by the National Endowment for the Humanities. Follow her on Twitter, @marisafox