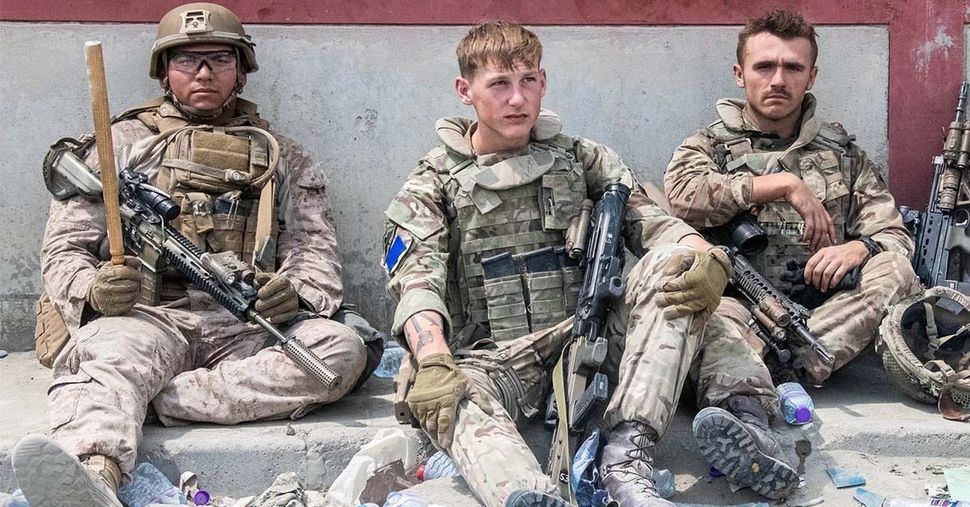 British armed forces work with the U.S. military to evacuate eligible civilians and their families out of the country on August 21, 2021 in Kabul, Afghanistan. By MoD Crown Copyright via Getty Images

Images of Afghans falling from airplanes and streaming into terminals, desperate to leave, evoke past scenes of collapse: Saigon at the end of Vietnam, the airlifts of Ethiopians from Israel and the desperate efforts of Jews and others to flee Europe as governments fell to the fascist wave.

Countless miscalculations and dishonest assessments, a disinterested American public and a lurking Taliban led us here. And then there are the failures of this past week, revealing the Biden administration is entirely out of its depth.

There are two possible lessons one can learn from what is unfolding. Only one is acceptable.

The first lesson one can learn in Afghanistan, the graveyard of empires, is that one should not even try. The world is intractable and unchangeable: it will always frustrate our best intentions and reward our worst fears. Our efforts have proved futile. What has trillions of dollars and thousands of lives lost gotten us, after all?

The second lesson is both simple and confounding: we cannot do everything, but neither can we do nothing.

I believe that this second lesson is the only possible one for Jews.

The response to evil abroad cannot be to throw up our hands. Failure is not inevitable, and what is currently unfolding is infuriating precisely because our attempts, although they failed, were worthwhile. The teaching of Kabul is not that we never should have tried: it is that pain is greater when the effort means so much.

For millennia, Jews have been the ones trembling in terror at the collapse of regimes and what would rise in their place. We were intimately familiar with the grim choreographies of checkpoints and paperwork, eternally delayed promises of assistance and the intensities of the worst and the cowardice of allies. On innumerable mornings throughout our history, Jews woke up to find themselves rendered strangers in the lands of their birth, much as many Afghans are now reckoning with a newly harsh reality.

In the midst of this pain, we learned that incremental efforts to improve the world can make an enormous difference.

Our efforts in Afghanistan, as quickly as progress seems to be slipping away, were not in vain. For the past 20 years, the local people have enjoyed something that was not medieval tyranny. Millions of women attended school, and became successful professionals. The government was corrupt, but at least it wasn’t genocidal. And while Taliban insurgents targeted civilians, the public square was not a place for whippings and executions.

All of this matters. Degrees of tolerance and emancipation have always enabled new possibilities throughout the ages. We are all waiting for the Messiah, but there is plenty to do in the meantime.

Practically, this means we should have a bias toward action and pragmatism. The world is too broken for us to be passive.

I remember when people thought of Afghanistan as the ‘good’ war, before they hardly thought of it at all. The cause was just: we were fighting those who hurt us. The use of power to beat back the kind of evil that bombs civilians in buildings half a world away might be the best justification for power in the first place. The 20th-century would have looked very different if more people would have felt the call to save people that looked very different from their own. Horrors in Rwanda, Cambodia and Syria all took place in full sight of those who could have stopped them. If there are train tracks leading to Auschwitz, you bomb them.

But there are limits to power, and they are startlingly clear. The greatest loss in Afghanistan was not the status quo: it was that the gains made could not be protected, that the traces of civilization were too easily erased. It was that the bad people were strong and the good ones were weak. Initial victory did not mean final triumph. And anxious eyes from Jerusalem to Taipei noticed that what America could not achieve won out over what it could accomplish.

This might have been inevitable. But let’s not pretend it is not terrible.

The Taliban should remind us that in the world as it is, America is distinctly one of the good guys. So are those who fought alongside us. We owe them so much more than we have given them. A debt is a relationship, and a relationship abandoned is a trust betrayed.

Too often, the temptation to do nothing wins out over the messiness of trying something. But the videos of Afghans streaming toward the airport in Kabul and tragically trying to take flight to a better life should be an indelible reminder that regardless of our success in being the good guys, we — Jews, Americans, children of freedom and prosperity — are the lucky ones. We got the flights out from terror and brutality. The least we can do is to ensure that others do, too.

Ari Hoffman is a contributing columnist for the Forward.