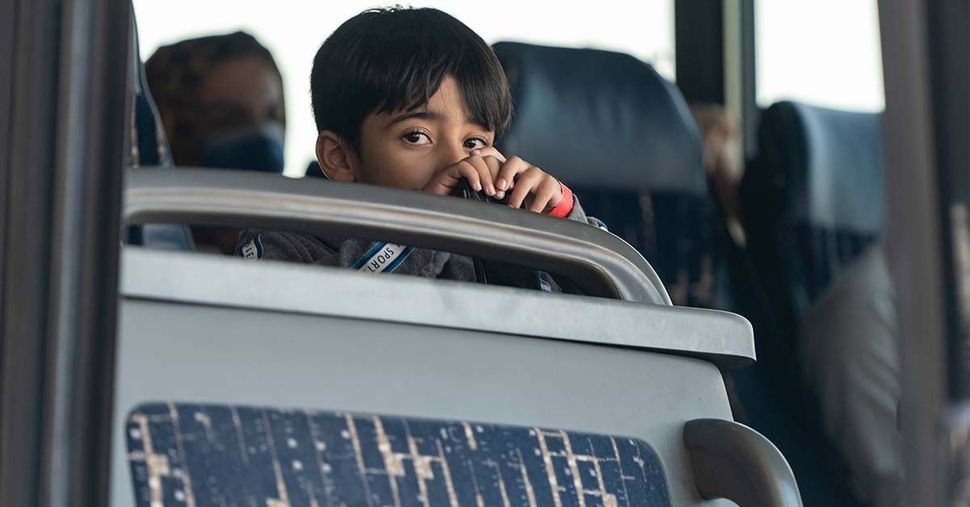 An Afghan boy sits on a bus that will take him to a refugee processing center at Dulles International Airport on August 24, 2021 in Dulles, Virginia. By Joshua Roberts/Getty Images

The scenes from Afghanistan seem too dire to overcome. But there are things each of us can do right now that can make a major impact.

The United States currently works with nine refugee resettlement agencies to assist those fleeing persecution abroad. HIAS, originally the Hebrew Immigrant Aid Society, is one of them — and busier than ever.

Mark Hetfield, President & CEO of HIAS, told me that his organization has about 16 community partner sites set up all over the country set up to receive, foster and provide social and employment assistance to newly arrived refugees and Special Immigrant Visa recipients, such as English as a Second Language classes and vocational training. But they are currently underfunded and under-resourced.

According to Hetfield, HIAS receives $1,225 from the U.S. government per refugee or SIV parolee(someone whose paperwork is still being processed) they assist.

But these funds, designed “to cover housing, furniture, food and cash assistance for up to 90 days after arrival,” are not nearly enough to cover essentials.

“It will take a lot of private resources to support these necessities,” says Hetfield.

This is where we come in.

As I wrote for the Forward earlier this week, as a descendant of refugees who fled the pogroms of Odessa and survived the Holocaust, the desperation of those trying to escape the Taliban in Afghanistan feels horrifyingly familiar. I am not equating the situation in Afghanistan to the Holocaust, but I cannot sit idly by while our Afghan allies, members of the Hazara minority, and women and children are persecuted.

The time to act is now; here are 10 high-impact ways you can support refugees from Afghanistan.

The Trump administration significantly curtailed our country’s refugee program, and groups like HIAS are still feeling the pinch. On top of that, the strain of the pandemic and a housing crisis make resettlement efforts significantly more costly.

The $1,225 provided by the federal government to resettlement agencies doesn’t come anywhere close to meeting the actual needs of refugees and SIV parolees.

“Try living on $1,225 for three months in a city like San Francisco,” says Hetfield. “It doesn’t even cover rent.”

Financial support can be sent directly to HIAS or to one of their local resettlement partners. Your donations to HIAS will go toward basics, like food and clothes, as well as necessities like a smartphone and internet access.

Another good option is No One Left Behind, a nonprofit committed to safeguarding those who risked their lives to assist the U.S. military. The organization is helping expedite SIVs and evacuate Afghan interpreters and others whose work put them in danger.

You can also donate your airline miles or credit card points to Miles for Migrants, an organization that assists those with legal approval to travel to the U.S. who cannot afford airfare.

If you would rather give of your time, you can volunteer to help with resettlement efforts in your community, or even host a homestay. If you are a lawyer, you can sign up to potentially provide pro bono legal assistance to Afghan evacuees through Human Rights First.

Female activists in particular are greatly imperiled by the Taliban and require immediate help.

Women for Afghanistan, the largest women’s organization in Afghanistan, has been at the forefront of educational and empowerment initiatives for Afghan girls throughout the country for the past 20 years. With violence escalating, they have been forced to shut down their sites and need help evacuating their staff, clients and families.

Public pressure helped galvanize a rapid response to the crisis in Afghanistan, and we can’t let up the pressure now.

Sign a petition urging the Biden administration to expand its refugee resettlement program and expedite access to SIVs, and urge Congress to add emergency funding to the budget reconciliation package.

My mother, a Holocaust survivor, always quoted Hillel to remind me of my moral responsibility. “If I am not for myself, who will be for me? If I am only for myself, what am I? If not now, when?”

Time is of the essence, and we can collectively make a big difference if we each do our small part.

Marisa Fox-Bevilacqua is a New York-based journalist whose documentary about her search for her mother’s hidden Holocaust past, My Underground Mother, was just awarded a grant by the National Endowment for the Humanities. Follow her on Twitter, @marisafox