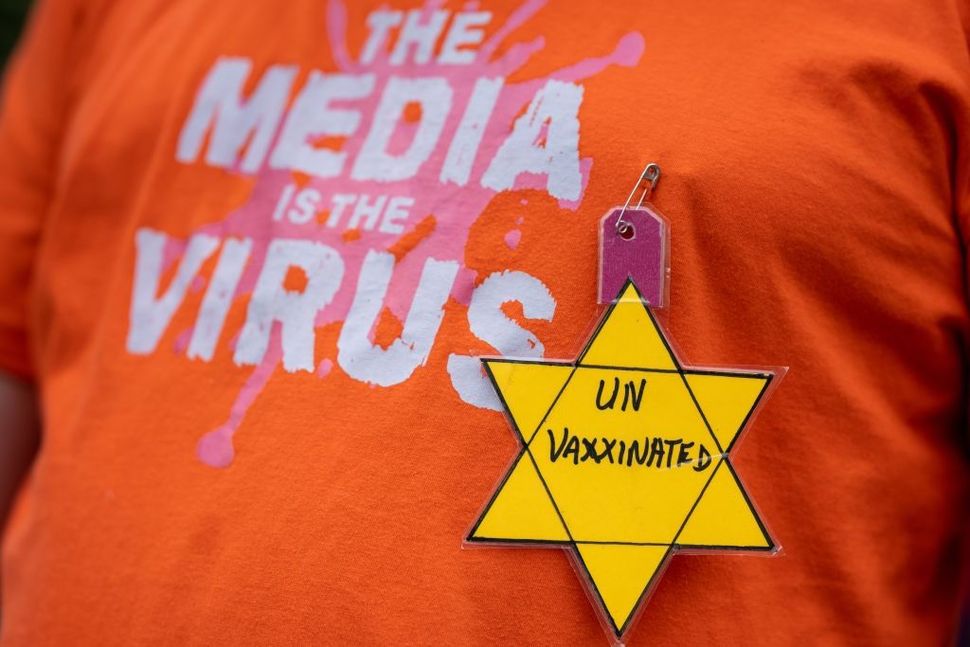 A close-up of a yellow star containing the words “unvaccinated” on the shirt of a protestor in Cardiff, Wales, Sept. 18, 2021 By Matthew Horwood/Getty Images

This incident is the third time in two months that candidates for the Virginia State Legislature have exploited antisemitic imagery for political purposes. In the first case, the candidate compared being a teacher with conservative views to declaring “I’m Jewish” in Nazi Germany. In the second, a different candidate tweeted about a Jewish delegate from the other party’s nose.

During this same time, 4,000 miles to the Northwest, the mayor of Anchorage defended anti-mask activists (with whom he disagreed) who wore yellow six-pointed stars, calling their action a tribute to victims of the Holocaust.

The exploitation of Jewish suffering and antisemitic stereotypes for political gain has become so common that it is becoming hard to filter cloddish insensitivity from intentional hatred. But it is worth noting that the motivations of the offenders are less important than their responses to being called out.

Many years ago, I had a very difficult conversation with a friend who is a Catholic priest and outspoken opponent of abortion — he insisted on referring to the “holocaust of abortion” as a way of expressing his deep moral revulsion, and I was not impressed. Appropriating that imagery diminishes the circumstances and suffering of the original victims, and it more than implies that anyone pro-choice is a Nazi.

The horrors of the Holocaust, the circumstances in which yellow stars and concentration camps were used to dehumanize and murder Jews, are matters that should not be reduced to political tactics. Especially in our diverse democracy, using Holocaust imagery or antisemitic tropes — in a campaign speech, a tweet, a flyer or in a public meeting — reduces the bigotry from which these dark forces emerged to a cheap political weapon.

My concern isn’t preventing the Holocaust from being invoked when appropriate, but rather, that desensitizing people to that bigotry was the primary tactic of the Nazi propaganda machine.

The response of every one of these offenders — and many others — was to avoid responsibility for their ignorance and insensitivity.

It is not that they did not apologize (some did so more convincingly than others). But every one of them expressed some combination of, “I didn’t mean it” and “I am sorry… if I offended anyone.”

People who seek public trust have a responsibility to be deliberate about their words, educated about their values and responsible for the consequences of their actions. Anything less than, “I was wrong, and I am sorry” is not an apology — it is an excuse.

It has been suggested to me that I may be more sensitive about these matters because I am both Jewish and Virginian. But if anything, I am more cautious about the use of Holocaust imagery and casual antisemitism in politics because I do not want other Americans to experience the pain that American Jews do every time the Holocaust is used to score political points.

Except for those with cloddish ignorance or intentional hatred, in 2021, stereotypes targeting other minority groups, or the genocide of other peoples, does not often find its way into public conversations and campaign literature — and I do not want it to.

That’s why it is critical to call out these halfhearted apologies. No one who uses Holocaust imagery to disparage their opponents, and then excuses their behavior, is fit for public office.