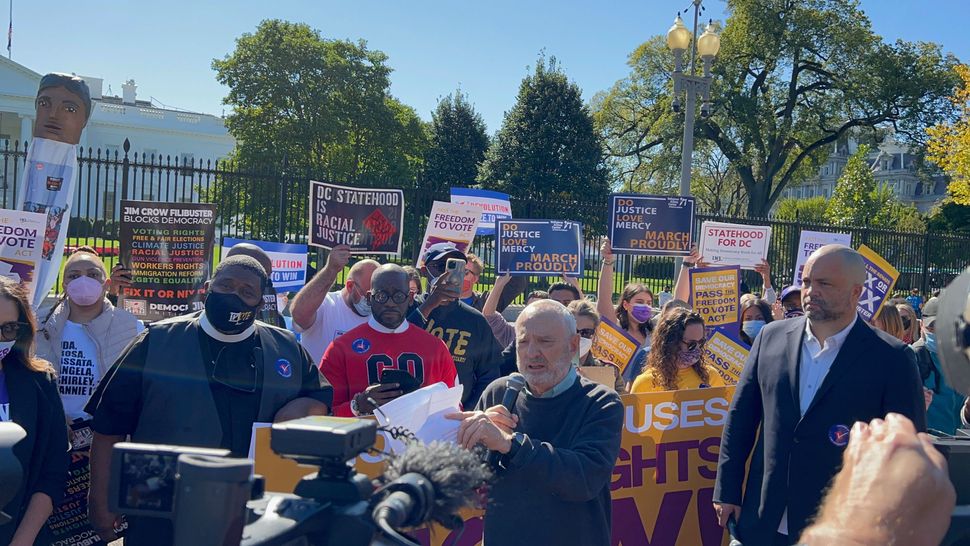 I have engaged in civil disobedience against the actions of Sudanese crimes against humanity in Darfur, South African apartheid, and a U.S. administration whose Vietnam policy I morally deplored. But never have I done so at the gates of the White House of a President I so staunchly admire, whose policies resonate so deeply with my religious values, who has for decades passionately championed voting rights and who understands the urgency of legislative action now to protect the integrity of our democracy — yet who has not taken every step available to him to achieve those protections.

Together with a range of religious, civil rights, and other civic leaders including Ben Jealous, former NAACP CEO and now President of People for the American Way, I once again was arrested on Oct. 19th as we called on Congress to enact legislation rebuffing the continued attacks on the sacred right to vote and for President Biden to intensify further his prioritization of, and engagement in, ensuring the passage of federal voting rights protections, as the Senate begins formal consideration of the Freedom to Vote Act.

How painfully sad it is to see how our nation’s intensifying hyper-partisanship has corroded long-time strong bipartisan support for this most precious right. As recently as 2006, the last time the Voting Rights Act was reauthorized, it passed unanimously and enthusiastically in the Republican-controlled Senate, overwhelmingly in the House — and was signed proudly by a Republican president. “How the mighty have fallen,” the Torah sadly laments, as we witness today with moral outrage Republican governors and state legislatures seeking to enact laws aimed at suppressing the right to vote. In 2021 Republican senators are blocking efforts, primarily via the filibuster, to enact urgently needed voting rights protections, a far cry from the 2006 Republican party.

These anti-voter state laws (400 bills introduced in states since Jan. 1, 2021) are an effort to address voter fraud problems that don’t exist and implement restrictions that will disproportionately impair the right to vote of people of color, indigenous populations, the poor, and young voters. Consider the new Texas law that makes it a felony for election officials to preemptively send mail ballot applications to registered voters, while Florida will now require filling out a tedious mail-in ballot application every two years. It is our hope that this peaceful action will add to efforts to goad the conscience of Congress and to spur Biden to prioritize passage of voter protection bills, even amidst his other urgent initiatives.

Biden must be prepared to reform the filibuster through some combination of widely considered proposals, among them: shifting from needing a majority of 60 for cloture to the minority needing 40 to prevent cloture, restoring the talking filibuster, and/or after unsuccessful cloture votes, reducing the 60-vote threshold on certain issues.

Why are these voter protection bills so essential? The Freedom to Vote Act sets national standards for federal elections, reduces partisan gerrymandering, and modernizes America’s election systems. The John Lewis Voting Rights Advancement Act makes sure that any changes to voting rules that could discriminate against voters based on race, ethnicity, or language minority status are federally reviewed.

Without immediate intervention, this coming election day will be a national reckoning, a betrayal of the founding values of our nation, a scandal of injustice. And the resulting Congresses may well undermine so much of what President Biden has or will achieve.

At the Religious Action Center of Reform Judaism, we are proud that the civil rights community’s contributions to the Civil Rights Act of 1964 and Voting Rights Act of 1965 were drafted largely in our conference room. Reform Jews nationwide – indeed, many throughout the Jewish community — have joined together in rallies and advocacy in state legislatures to push back against restrictive voting laws. America is a nation that has given the Jewish people more rights, more freedoms, more opportunities than any diaspora land in which we have lived. Securing those rights for every American is indispensable for the continuing strength and integrity of this democracy that has given us so much.

In the face of injustice, God tells us, in Leviticus 19:16, “Do not stand idly by.” Recognizing that those who fail to act in this moment when our democracy is imperiled will be held accountable if it falters, we gathered at the White House to prod President Biden to use the full power of the presidency to mobilize the nation and Congress to press urgently for voting rights protection. Ensuring the passage of federal voting rights legislation for the American people must visibly remain a key priority for all who seek to protect America’s fragile democracy.

Rabbi David Saperstein is the Senior Advisor for Strategy and Policy of the Union for Reform Judaism and the former U.S. Ambassador-at-Large for International Religious Freedom.