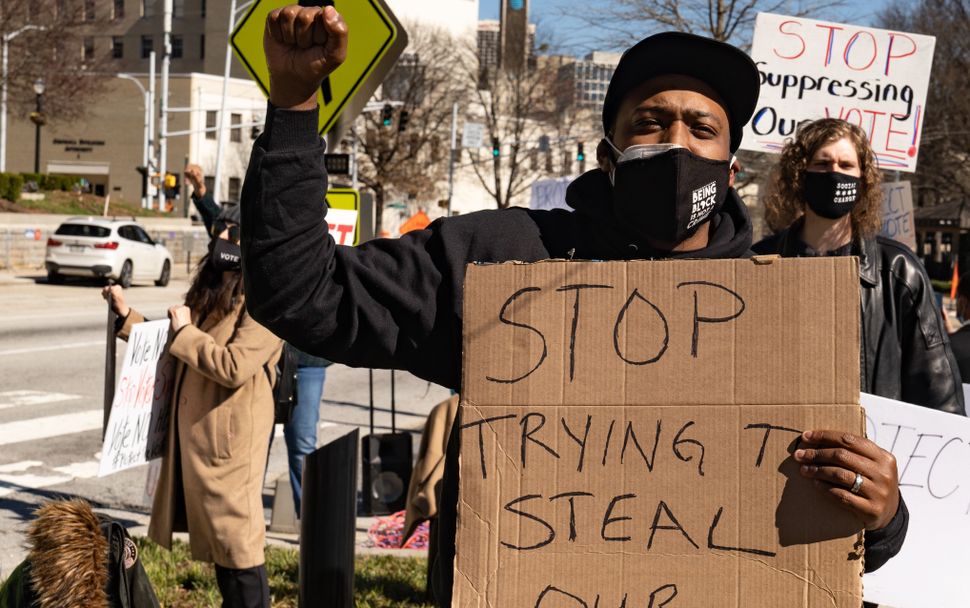 Demonstrators stand outside of the Georgia Capitol building, to oppose the HB 531 bill on March 3, 2021 in Atlanta, Georgia. By Megan Varner/Getty Images

The sweeping law that Georgia’s legislature passed on Thursday to restrict voting rights — part of a proliferation of such efforts Republicans are pushing in statehouses across the country — is shameful.

I always thought it was tragic that comparatively few American citizens took seriously their right to vote. Now, rather than celebrating after the 2020 presidential election had the largest turnout in more than a century, 43 state legislatures are considering 250 new regulations to make it more difficult to cast a ballot. These efforts are entirely attributable to Republican lawmakers ill-founded reactions to former President Donald Trump’s unsubstantiated and repudiated claims of voter fraud.

“Voting is a kind of prayer” is how the newly elected Democratic senator from Georgia, Rev. Raphael Warnock, described the significance of universal voting by all American citizens, not long before his state became the first to clamp down on voting rights since Trump’s loss. My parents would have heartily endorsed that sentiment.

Having escaped Nazi Germany as teenagers, they held sacred their right to vote as American citizens. The country of their birth had denied them such rights. They were designated enemies of the state, because they were Jews.

Here in America my parents were not just welcomed, they were promised that through their vote they could choose leaders — from President of the United States down to local school board members. Their Judaism would be no impediment, because all citizens had total equality when it came to the ballot box.

So they never missed an election. They took this opportunity with the same seriousness and devotion that they directed to our religious observance. They sat together the night before every Election Day to review the candidates and propositions. And similar to how religious practice is modeled to the next generation, they made sure to take me into the voting booth with them.

It was only much later that I learned that voting, a right guaranteed to all male citizens by the 15th Amendment, was still denied to former slaves after Reconstruction. Literacy tests and poll taxes effectively prevented African Americans from accessing their rights for decades. Not until the Voting Rights Act of 1965 were they in fact guaranteed what was rightfully theirs.

But the current state proposals want to return us to those days of Jim Crow, to suppress to the extent possible the voices of Black Americans. Each of these 250 proposals disadvantages the poor, those without transportation, those who cannot take time off from work, those for whom getting to the polls on a specific day is a stumbling block.

The law Georgia passed on Thursday introduces more rigid identification requirements to vote by absentee ballot; it limits drop boxes, shortens the time period between general elections and runoffs; makes it a crime to give food or water to people waiting in line to vote; and generally expands the state legislature’s power to control election processes rather than the secretary of state.

The final version did not include some of the harshest restrictions initially in the bill, including a ban on Sunday voting. But that restriction is in many of the other state proposals still pending.

Limiting Sunday voting has no other purpose than to make voting in Black churches, known as “Souls to the Polls,” more difficult if not impossible. Election integrity is the claimed purpose, but all studies have concluded that there is virtually no election fraud. Election regulators and our courts have determined the election in 2020 was the cleanest in our history. We travel this nasty road again at our peril.

In response the House of Representatives passed legislation that would expand voting rights by automatically registering all eligible voters unless they intentionally opt out. National elections would allow at least 15 days for early voting and voters would be able to register and vote the same day. But many experts fear that the 60 votes required for passage in the Senate will kill this progressive legislation.

Voter suppression is a Jewish issue. As Jews, we are intimately familiar with having our own rights limited in most places of our long sojourn. Undermining the right to vote of any American citizen is emphatically wrong. When we say, “the people have spoken,” we want it to include all the eligible people.

As Jews we have an obligation to energetically fight against these hundreds of state efforts to undermine the votes of our Black fellow Americans. Let us raise our voices loud and clear that efforts to limit voting by any group is simply un-American.