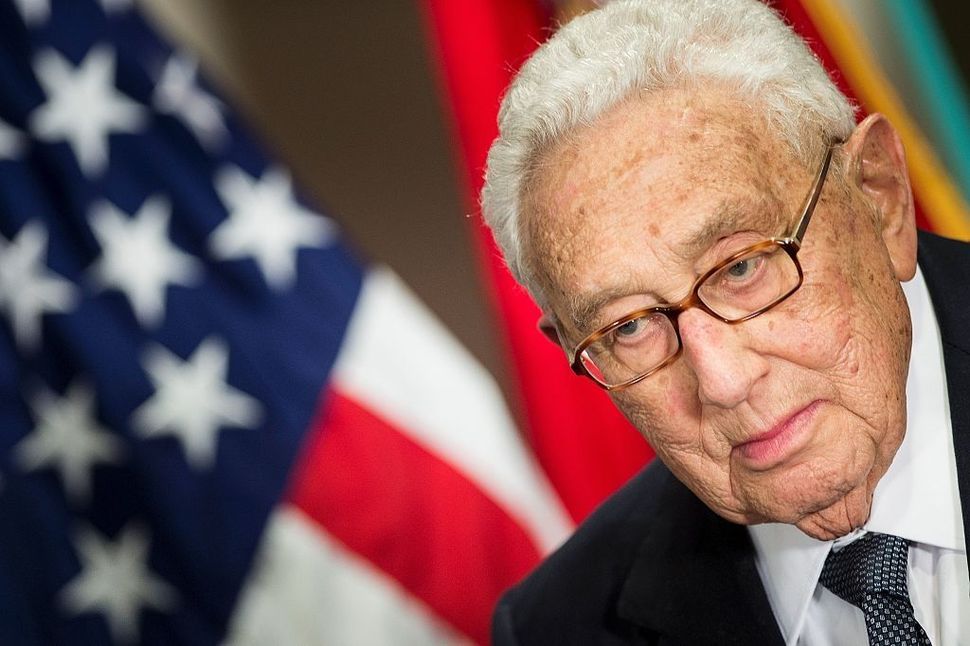 Former US Secretary of State Henry Kissinger listens as he is introduced at a ceremony honoring his diplomatic career on May 9, 2016 at the Pentagon in Washington, D.C. By BRENDAN SMIALOWSKI/AFP via Getty Images

Some American Jews resent Kissinger for supposedly holding up arms for Israel during the Yom Kippur War, or for his unsavory comments about fellow Jews captured on Nixon’s Oval Office tapes. Some Israelis revile Kissinger for pressuring Israel to give up territory in Sinai and the Golan.

Yet Kissinger, now 98, was no enemy of Israel, but a skilled statesman whose diplomatic strategy helped Israel in fundamental ways. A deep historical review of thousands of declassified documents now available in American and Israeli archives from Kissinger’s time in government reveal that, rather than undermining the nascent Jewish state, he did much to ensure its survival and well-being.

Kissinger grew up an Orthodox Jew in Fürth, a small Bavarian city adjacent to Nuremberg. In 1938, at age 15, he fled the Nazis with his family, migrating to the United States. Thirteen of his closest relatives and most of his classmates perished in the Holocaust. Although he rejects the idea that the Holocaust informed his political development, he readily volunteers that it gave him an emotional affinity with Israel.

In America, he gave up religious practice but retained his Jewish identity. As a Harvard professor in the 1960s, he made six trips to Israel, which impressed upon him the fragility of the Jewish state’s existence in a sea of Arab hostility.

As national security adviser to President Nixon in the 1970s, Kissinger served a president who harbored antisemitic prejudices and taunted Kissinger about his Jewish identity. Early on, the president made it clear to Kissinger that he did not trust him to deal with Israel and therefore tried to exclude him from dealing with the Middle East.

Time and again, Nixon would complain — to his staff, to Arab foreign ministers, even to the Soviet ambassador — about Kissinger’s pro-Israel bias and the role he played in shielding the Jewish state from American pressure.

Kissinger therefore had to disguise his sympathy for Israel, occasionally joining in the antisemitic jibes and even cooperating in the wiretapping of his Jewish staff and journalist friends.

And yet, Kissinger systematically promoted Israel as a strategic partner of the United States in the Middle East, dramatically strengthened the country’s ability to defend itself, and devised a peace process that was designed to accommodate the political and psychological vulnerabilities that the Yom Kippur War had exposed.

Kissinger was the original architect, together with Yitzhak Rabin — then Golda Meir’s ambassador in Washington — of the U.S.-Israel strategic alliance, which is a cornerstone of Israel’s strength today. Taking advantage of both the war of attrition between Egypt and Israel and the civil war in Jordan in 1970, Kissinger persuaded Nixon that the best way to preserve stability in a volatile Middle East was to give Israel the means to deter the Arab states from resorting to force. 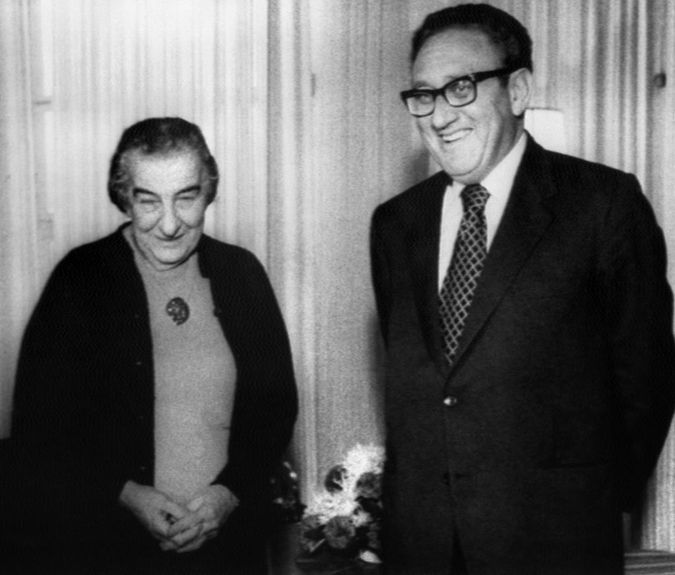 US Secretary of State Henry Kissinger stands next to Israeli Prime Minister Golda Meir during a visit in Israel Feb. 27, 1974. On Jan. 18, 1974, Egypt and Israel signed their first disengagement agreement separating their military forces on the east side of the Suez Canal. By AFP/Getty Images

At the same time, he shielded Israel’s nuclear program from American pressure, forging a U.S.-Israel understanding about Israel’s policy of nuclear ambiguity which still remains in place.

When bolstering Israel’s deterrent capabilities nevertheless failed to prevent Egypt and Syria from launching war on the country during Yom Kippur 1973, Kissinger, newly sworn in as secretary of state, sprang into action to forge a more stable, American-dominated order in the Middle East.

In the span of 22 days, Kissinger skillfully maneuvered to ensure Israel’s victory over Soviet-backed Egyptian and Syrian forces, to prevent a humiliating defeat of the Egyptian army and to sideline the Soviet Union in the subsequent peace diplomacy by demonstrating to the Arab nations that only the United States could deliver results at the negotiating table. Far from holding up arms supplies, Kissinger believed they were necessary to enable Israel to launch counter-offensives that would in turn benefit his diplomacy by forcing Egypt and Syria to cease fire.

The Yom Kippur War had nevertheless demonstrated that he could not rely on Israel’s deterrent power alone to counter Soviet-backed radical Arab states. So Kissinger resolved to flip Egypt from the radical to the moderate camp by addressing its territorial claims. His mechanism for doing so was an American-led, Arab-Israeli peace process that would remove Egypt from the conflict with Israel and therefore make it impossible for the other Arab states to contemplate another war.

Nixon would have preferred to work with Moscow to impose a settlement on the warring parties by pressing Israel to withdraw to the 1967 lines. But Kissinger did not believe the Arabs were ready to reconcile with Israel and feared an imposed peace would break Israel’s will to survive. Instead, Kissinger introduced the concept of step-by-step diplomacy, which involved a gradual, incremental process of peacemaking that sought to ameliorate the conflict rather than end it and required smaller, more digestible Israeli territorial withdrawals.

Nevertheless, Israel’s leaders — Golda Meir, Moshe Dayan, Yitzhak Rabin, Yigal Allon and a hawkish Shimon Peres — were reluctant to give up tangible territorial assets for intangible Arab commitments to nonuse of force. If Israel were to trade territory, they insisted, it would have to be for peace.

Shaped by the appeasement which had generated World War II, Kissinger had developed a jaundiced view of peace. He feared that pursuing peace with too much enthusiasm would jeopardize the stability that his order was designed to generate. Peace, for Kissinger, was a problem, not a solution. The desire for it needed to be manipulated to produce something more reliable: a stable order in a highly volatile part of the world.

Skeptical of peace, Kissinger therefore tried to persuade Israel’s leaders that they should trade pieces of occupied territory to buy time, enabling Israel to overcome the trauma of the Yom Kippur War, reduce Soviet influence in the region, build Israel’s military and economic strength, assisted by a generous American patron, and exhaust the Arabs so that they would eventually come to accept Israel.

By the time this acceptance finally came, Kissinger expected that Israel would then be strong enough to contemplate taking the risks involved in an all but complete withdrawal to the 1967 lines.

It was not easy to bring Israel’s Labor Party leaders around. At one point, in 1975, Kissinger withheld new arms sales to Israel for four months to convince Rabin and Peres to yield the strategic passes and oil fields in Sinai.

In the end, Kissinger was so successful in his arguments with Israel’s leaders that territory-for-time became the foundational principle of Israel’s negotiating strategy with its Arab neighbors and the Palestinians. The two interim agreements he negotiated between Egypt and Israel, in 1974 and 1975, bought Israel five years before it had to contemplate full withdrawal from Sinai. The interim agreement with Syria on the Golan Heights in 1974 bought Israel some 40 years of quiet there. And the 1993 Oslo Accords, with their phased withdrawals and undefined endpoints, enabled Israel to cede only 40% of the West Bank, retaining the Jordan Valley and the strategic high ground. Prime Minister Sharon’s unilateral withdrawal from Gaza bought Israel another 25 years with which to consolidate its hold on East Jerusalem and the West Bank even though it resulted in periodic rocket attacks on other parts of Israel.

Simultaneously, with American support, Israel built its military, economic and technological capabilities to become the strongest power in the Middle East. Israel is no longer the small, vulnerable state that Kissinger worried about. And just as Kissinger anticipated, the Arab states tired of the conflict and accepted Israel, as manifested in the Egyptian and Jordanian peace treaties of 1979 and 1994, and more recently in the 2020 Abraham Accords.

There is a cruel irony, however. Kissinger believed that using territory to buy time would increase Israel’s sense of security and therefore its ability to yield occupied territory. But it also solidified Israel’s grip on the territory remaining in its control, as settlers used the time to expand their communities in the West Bank and the Golan with Israeli government support.

When Kissinger left office in 1977, there were 1,900 settlers in the West Bank; today there are almost 500,000. That has made it so politically difficult to relinquish the territory that now it has become almost unimaginable.

That was not Kissinger’s intention. He believes to this day that a stable order in Israel’s neighborhood requires Israel to continue yielding West Bank territory, albeit in gradual, incremental steps. Otherwise, he fears that “the Jewish state would consume its moral substance if it sought to rest its existence on naked force.”

Today, few in Israel or among its many American supporters feel the need to address Palestinian territorial aspirations, believing that the status quo is sustainable and Palestinian concerns can be assuaged by small economic steps designed to ease the pressure of Israel’s military occupation. They would do well to heed the warning of a farsighted friend. It was born of Kissinger’s experience on Yom Kippur 1973, when what he thought was a stable order maintained by Israel’s deterrent strength suddenly collapsed because of the failure to address Arab territorial grievances. It could happen again.

Martin Indyk is Distinguished Fellow at the Council on Foreign Relations in New York. This opinion piece is adapted from his book Master of the Game: Henry Kissinger and the Art of Middle East Diplomacy, published by Alfred A. Knopf in Oct. 2021.